It is a treat today to introduce you to Alretha Thomas, playwright and author.  Sit back with a cup of coffee or your favorite tea and enjoy learning more about Alretha Thomas. ~Lisa
_________ 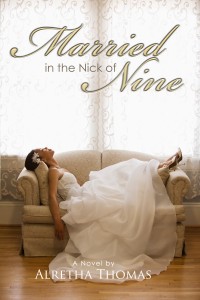 Married in the Nick of Nine by Alretha Thomas

Synopsis: Cassandra Whitmore is facing yet another Valentine’s Day alone. Her love life is as dry as the Sharpie pen she uses to mark an even more dreadful day on her calendar—her upcoming 30th birthday. Driven by the maddening ticking of her biological clock, Cassandra is determined to meet, fall in love with, and marry “The One” within nine months.
When Cassandra accompanies her cousin to a night club, her Type-A quest to meet a man is quickly rewarded by a stranger’s velvety, baritone voice asking if he might occupy the seat next to her. He’s Nicolas Harte, whose good looks leave Cassandra speechless, but not for long. After mustering enough courage to strike up a conversation, she learns Nicolas is everything she wants in a man—smart, successful, and available. There’s only one catch: He’s “GU” (geographically undesirable). Nonetheless, Cassandra falls in love with Nicolas and makes the uncharacteristic decision to move from Los Angeles to New York to be with him. But Cassandra gets a rude awakening when she discovers there’s something rotten in the Big Apple.

It is my pleasure to introduce you to author Scott Fitzgerald Gray today.  Grab a cup of coffee, sit back and enjoy getting to know Scott and his work. 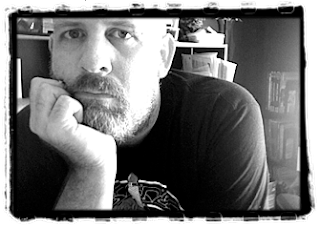 Scott Fitzgerald Gray has been flogging his imagination professionally since deciding he wanted to be a writer and abandoning any hope of a real career in about the fourth grade. That was the year that speculative fiction and fantasy kindled his voracious appetite for literary escapism and a love of roleplaying gaming that still drives his questionable creativity. In addition to his fantasy and speculative fiction writing, Scott has written for feature film and television, was a finalist for the Jim Burt Screenwriting Prize from the Writers’ Guild of Canada, and currently consults and story edits on projects ranging from overly obscure indie-Canadian fare to Neill Blomkamp’s somewhat less-obscure "District 9" and the upcoming "Elysium".

More info on Scott and his work (some of it even occasionally truthful) can be found by reading between the lines at www.insaneangel.com.

Tell us a little about your current project?

My newest novel is a kind of semi-autobiographical high-school coming-of-age speculative-fiction techno-thriller romance (I know; that old story again) called "We Can Be Heroes". [Link: http://insaneangel.com/insaneangel/Fiction/Books/WeCanBeHeroes.html] The origins and genesis of the book go back a long way, insofar as its current form originally started out as a screenplay treatment that never properly came together. It’s a bit of an ode to high-school friendships, and my quaint small-town Canadian upbringing, and some of the speculative fiction that inspired me as a nascent writer, and a life-long love of roleplaying games.

"We Can Be Heroes" was a bit of a departure from the epic- and high-fantasy tales I’ve been mostly writing the past few years, and so the writing of it felt very fresh, which is always good.

Having worked in both screenwriting and fiction, what are your thoughts on both forms as they compare from a writer’s perspective?

I find that being a fiction writer is more satisfying on absolutely every level than being a screenwriter, which is a big part of the reason that I haven’t done any real screenwriting in a quite a few years now. (I still do a fair bit of work in film, but mostly as a story editor and script consultant working on other people’s projects.) Now, this balance of satisfaction obviously varies a lot depending on whether you’re a screenwriter whose ultimate aspiration is to write and direct or write and produce, more fully exploring the creative and business sides of the art. For me, I just like to write, and though I love the collaborative nature of film storytelling, I just got to a point where I had too many stories to tell (including We Can Be Heroes) whose scope started to push beyond what I felt comfortable doing as a screenwriter. 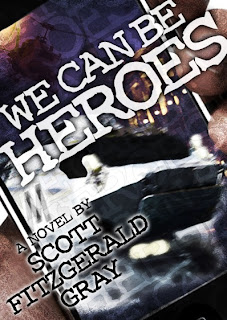 What’s your background as a writer, and what’s your take on school and workshop learning versus being self-taught?

I did a fair bit of study in creative writing in college and university, but have rather mixed feelings about it. At the end of the day, becoming a better writer is almost always a matter of consuming others’ words and generating your own words as fast and as thoroughly as humanly possible. The more you read, the more you write, the better your writing will get, always.

Having said that, though, I think workshops are actually a great and necessary process. The problem is, workshops don’t function the way most writers (and a lot of instructors) think they do. In a workshop, the feedback you get from other people is much less important than the feedback you give to other people — because the point of workshopping is to learn how to spot problems in your own work as easily as you can spot problems in other people’s. When we read someone else’s story, it’s easy to say, “This was great, but I felt like these plot points didn’t quite connect, and this character’s decision seemed forced, et al.” But when we look at our own work, we’re often too close to it to recognize those same root-level issues, because we can’t separate the perfect story in our head from the execution of that story on the page.

Are workshops the only way, or even the best way, to develop that kind of aesthetic separation?

Not at all, no. Anything you can do to create a kind of objective distance between yourself and your work will do the trick. As beginning writers, this is often the toughest thing to do because we tend to start with a single project or idea that we work to death, afraid to ever look away from it in our attempts to make it perfect. The problem is, when we’re that close, we often can’t see what needs to be fixed, so we need to learn how to make ourselves look away.

Often, the best thing you can do in aid of making a story as good as it can be is to work on something else at the same time. Put Project A aside if you have any sense that it’s not quite coming together, because working on Project B will give you the distance you need to recognize why it’s not coming together. When you finish a first draft, put it away for a week, or a month, or six months while you start a first draft of something brand new. If you feel yourself getting bogged down working on your novel, shut it down for a while and write some short fiction. Ideally, you want to be able to pick up something you’ve written and look it with completely objective eyes. If you’re ever rewriting or editing and you have the sudden feeling of not being able to remember writing what’s in front of you, you’re there.

Does working on multiple projects make it easier or more difficult to maintain a writing schedule? And what does your own schedule look like?

In my experience, much easier, because knowing that setting something aside is an essential part of your process means never having to suffer the angst of so-called writer’s block. If you’re stuck on something, you work on something else. It’s that simple. If you get stuck on the new thing, try going back to the first thing, or seek out even newer ideas to beat into shape.

My own schedule involves writing every day, because bitter experience has shown me that this is the best way for me to keep writing. Writing every day — on any project, any level, any number of words — creates a kind of continuity to the creativity. Force yourself to write a hundred words as you crawl into bed at the end of the worst day imaginable, and when you sit down to write on the next better day, your connection to those hundred words will get you going. Having written yesterday makes it easy to sit down and write today, even as not having written yesterday makes it that much harder to get going again. And when fate and circumstance conspire to make that single yesterday into a week of not writing — or a month, or longer — turning a dry spell into a creative rut gets way too easy.

If you missed it, check out the interview I did with Beauty and the Books on my Material Witness book blog tour.  You'll get to know a little about me and my writing.

Wow!  I am blown away by the fantastic reviews my Texas Hearts series is getting.  Check out the latest reviews from Tana Rae Reads...