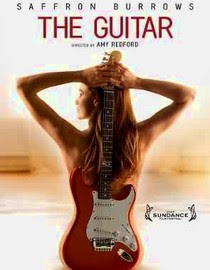 Having just come off of a fantastic workshop on ScreenWriting Tricks for the Author, I've been drowning myself in movies lately. I'm a huge movie buff so it's not a hardship. But I must admit that my taste and that of my family's doesn't always jive so I've been watching movies in the wee hours of the morning when I can finally get the television.
One movie I've recently watched is The Guitar starring Saffron Burrows. Saffron plays Melody Wilder, who is not just having a bad day, she's having a miserable day that just keeps getting worse. She receives news that she's dying and only has a few months to live. Shocked she shows up at work...late...and finds out she's laid off from her job. Add to that, her boyfriend needs some "space". She goes back to her very small basement apartment in the city and decides to make a drastic change to her life with the time she has left. She drops the keys to her apartment on the floor and just walks out on her disappointing life.
She signs a short term lease on an expensive loft apartment in Manhattan and decides to really live her life. And she does. She explores everything from buying the type of furniture she wants, having intimate relationships with the people she wants, to eating the foods she wants. And she finally learns to play the guitar. I've played guitar since I was 14 and I have to admit to feeling a little thrill along with Melody when she got that red guitar and test it out for the first time. I know how exciting that feels and how much holding that guitar in your arms feels like hugging a friend. Melody doesn't know how to play, but she's always wanted to ever since she was a little girl. Her passion for learning and living really struck a chord with me. (No pun intended.)
This movie was enjoyable on many levels. First, I admit I was drawn to the movie by the title. But I kept asking myself how many people would be brave enough to step outside of their comfort zone and explore the feelings and experiences Melody did. Would I? Does it take facing death to make you finally want to live and feel alive? I sure hope not. Yet when Melody did this, it changed everything for her and the ending had a nice twist.
I loved how her grief over her diagnosis evolved over time as she let go of the conventions of her past and began experiencing life instead of just walking through it. How many of us do that? Her diagnosis never leveled her the way I imagine something like that would level me. She didn't just lay down and let herself die. Her character is reserved in nature but instead of getting angry and curling into a ball in a puddle of tears, she took the bull by the horns and refused to let death have the last laugh. The Guitar is a quiet film, but one that left a mark on me and had me reflecting on my own life.

Email ThisBlogThis!Share to TwitterShare to FacebookShare to Pinterest
Labels: Dramas, films, Independent Films, movies, Redford, Saffron Burrows, Sundance, The Guitar
Newer Post Older Post Home
This site participates in the Amazon Affiliate Program where the site owner receives payment/credit for books sold by clicking through to Amazon. Clicking on the slideshow or carousel will bring you directly to Amazon.