Katherine “Kat” Smith is formerly a co-host of a four year, syndicated morning radio program with ABC Radio Networks, Inc. Her Wednesday one hour show, A Woman’s Point of View, focused on relationships.
Recently certified as a relationship coach Kat also created and manufactures a communication game for couples. She is native of New Orleans, who learned early that life is not fair, it’s just life. One of twelve siblings from ten fathers, Kat was born to a mother whose own confusion with love created damaging patterns that she and her sisters repeated in their own relationships. Now she speaks to help women who cannot articulate or communicate their experiences with topics that concentrate on love and life enrichment, clarity of message in both career or personal relationships and recovery.

Kat is the author of several books including Romantic Retreats in Texas, Seeds From Mama’s Garden and has several programs and products that support healthy emotional living.

Get to know Katherine:
1. What inspires you as an author?

Stories inspire me. My life has been filled with vivid stories both real and fiction. This story is based on a true account of my life. I changed the names ever so slightly to protect myself, not the guilty. I wanted to share this story with the hope that it may inspire just one woman to release her bonds from childhood trauma and live a life filled with love, free from what haunts her.

2. Are there strong female characters in this story?
Yes, I believe in our strength and gratefully I was given examples of that in my life and I cherish that. We don’t have to use that strength against ourselves by being combative or by sabotaging our relationships. We have to balance that strength with love and self-nurturing. Katarina LeBlanc, is my main character. She find strength in her mentor and boss, Susan Williams who takes her under her wing and grooms her with love and support. They have a special bond. Katarina also experiences the failing of love as she endures a separation from her husband Jonathan. But with a twist of fate, love blossoms elsewhere for Katarina.

3. You use horticulturist terms to identify the chapters in Seeds From Mama’s Garden. What is the significance?
From the seed we grow. From seeds gardens grow. Although these chapters show a chronology of the growth of the characters in the book, they also represent growth in life and how if we neglect our gardens they can get over run with weeds and the not so pretty things that grow there. But, if we cultivate and nurture them, they produce beauty and harvest. Katarina learns that seeds of deception and pain were propagated in her family’s garden and the keeper was none other than her mother, Lorraine.

4. How is the story is laced with a touch of spirituality?
Katarina is forced to deal with her past when she sees visions of a nine year old. Laura, her therapist guides her into a session where Katarina relays a dream. When she realizes its meaning it starts the spiral into her struggle to uproot the weeds that choke her life’s happiness. In addition, the Universal powers will not allow her to bury her past any longer. At work she is assigned a new client; SAIF (Survivors of Abuse and Incest in Families). Tellani Grayson, their representative and a clairvoyant can see this little spirit and the pain that Katarina carries with her.

5. Now the cover is quite an eye catcher. You designed it, so how did you come up with the design.
There is three messages in the cover: Sin of the flesh, is represented by nakedness. Seed of the womb for the female body and the southern woman is represented by the magnolias. I am born and raised in New Orleans, and have very full and colorful memories of my life there. Especially with my Grandmother, Madear. Honestly, that is what we called her. My cousins called her Greenie. And we refer to her mother, my great grandmother as Mama Jo.(Short for Josephine). They were strong women and I wanted to honor them in my story along with my sisters which I liken to various trees that matched their personalities.

6. What about you personally? What do you want readers to know about you?
I am passionate about my craft of writing. I have eight books now with the recent release of two at the same time: Seeds From Mama’s Garden and a romantic Texas travel guide – Romantic Retreats in Texas. Presently, I am now on chapter eight of my next book. I love writing and publishing. I created an event in Dallas called the Muse Literary Mingle where I feature a publishing professional each month (i.e. author, agent, editor, etc). It is a casual, after work gathering which allows networking and one-on-one conversations with the guests and the opportunity to sell and promote their books and services. I have volunteered for literary organization and provided consultations for those seeking publication. In the past I was a model and actor. I am the eighth of 12 children, 6’2” tall and I love to cook, travel and the ocean.

7. Who are your favorite authors?
Again, I am drawn to stories of strong female characters. Toni Morrison won me over with Song of Solomon, Beloved and Bluest Eyes. As a young girl I was introduced to Victoria Holt to which now I have an entire collection. Mostly I read inspirational books. 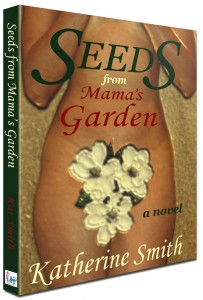 Synopsis:
Seeds from Mama’s Garden is an inspiring, based-on-truth account of one woman’s journey to a rainbow of happiness, led by the spirit of her youth. With help, she weeds her life of the strangling debris of memories. Inspiration gives her the strength to uproot the pain of generational abuse, unearthing the source of the family’s unhappiness and their mother’s true identity; an accomplice in the crimes committed against her daughters.

At a time when KATARINA LEBLANC thought her world was settling close to normal, everything changed, again. An attempted rape opened the gates to a deluge of memories and dreams to which she began communicating with herself as a child, quickly reconciling the past, which she had buried long ago.

Therapist LAURA THOMKPINS, helped Katarina uproot the painful history of her family, cultivated generations before. Together with the heroine from her dreams, (herself at the age of the abuse) she unravels the mysteries which led to answers long awaited. Likened unto a flower that blossoms between the cracks in the sidewalk, she saw her youth as strong, beautiful and determined.

Her family’s garden had been tended by women who forsaken their desire for love and endured tainted relationships in exchange for the comforts of financial stability. Women like her grandmother MADEAR, whose brutal rape in a cotton field formed her opinion about men. LORAINE GERARD, her mother, who recklessly bore twelve children, fathered by ten men. When she married GENE GERARD, Loraine ultimately sacrificed her daughters to sexual torment by neglecting the sprouts of her womb and propagating seeds of lies, deception and denial.

Katarina develops a three dimensional view of her childhood, teenage years and adulthood. She and Laura examined the patterns Katarina displayed and suffered from repeatedly. Encounters with her younger self and therapy gives her insight into the relationships with her siblings and the part they play in the infestation of incest.

Ensuing weeks filled with emotional turmoil, became even more dramatic as Katarina fought to mask her pain while challenged with the assignment of a new account, Survivors of Abuse and Incest in Families (SAIF). TELLANI GRAYSON, a representative of SAIF and a clairvoyant, inspires Katarina by sharing visions of Katarina’s past and future.

With physical and spiritual forces bearing down, Katarina also struggled to emotionally cope with a separation from husband JONATHAN LEBLANC. His affair, accompanied by the assault leaves Jonathan desperate to scale the walls she’s built around her heart, while a budding new love interest, BRAXTON JUSTICE is overshadowed by Katarina’s need to end her family’s suffering.

First she must confront her mother Loraine, for failing to expose her husband, Gene for what he is; a child molester and rapist. Seen as his accomplice, Loraine ignores the fact that he may prey on yet the next generation of girls in the family.
Next is her sister LOUISE, who holds the truth as to the father of her first child, CLARISSA. Twenty five year old Clarissa only needs confirmation that her grandfather is actually her father.
In the end, Katarina experiences closure with her little spirit, setting her free of the vines that bound them.

Loraine and Gene are arrested, tried and convicted. During the trial, Clarissa reveals that she secretly tested Gene’s DNA to prove that he is her father. With vindication brings wholeness and healing for the family and Katarina blossoms into a new life.