It is my pleasure to welcome AAMBookclub Author Sandra Ottey to Conversations today.  Sit back with a cup of coffee and enjoy reading her excerpt from Runaway Comback.
Lisa ~
___

BIO: Sandra Ottey is the author of two novels — Jamerican Connection and Runaway Comeback. She earned a bachelor’s degree from Medgar Evers College of the City University of New York and a master’s degree from Polytechnic University. Sandra lives in New York and is working on her third novel.

Get to know Sandra:
1) What was the inspiration for writing Runaway Comeback and what do you expect readers to take away from it?
Response:
Inspiration, strength, hope and determination. I wrote this story as encouragement to high school and college dropouts to pick themselves up, dust themselves off, and still go on to achieve whatever educational goals and aspirations they had set for themselves before they dropped out.
2) Tell me more about Rose’s background and why she wanted to escape her marriage so badly.
Response: Rose Thorn was a high school dropout, young mother and bride, determined to get back on track to realize the dreams and ambitions she had set for herself before she met her controlling husband, Donovan. Determined to get back on track and get a college degree Rose endures blatant infidelity, emotional and physical spousal abuse and is even kidnapped and raped by her husband. Rose escapes the matrimonial home and travels back and forth from Jamaica to Brooklyn with her young daughter in tow, determined to realize her educational ambitions and to escape the abuse. But her husband, Donovan, relentlessly plants spiky hurdles in her way, both in Jamaica and in Brooklyn, New York, determined to keep her subservient while his sordid lifestyle escalated.
3) Tell me a little bit about the love story between Rose and Calvin.
Response: Rose and Calvin attended the same high school in Jamaica, and Calvin had been searching for Rose ever since she got pregnant and dropped out. Calvin had migrated to Brooklyn after he graduated. Rose is reunited with Calvin in New York after Rose left Donovan for the last time.
4) How do you manage to pull readers into the story?
Response: Readers in general have told me they are completely engrossed into the story because they feel as if they are actually in the scenes themselves because their five senses are completely engaged. Also, women from all walks of life can relate to the storyline and men can certainly learn from it.
5) What are you working on now?
Response: I am currently working on my third novel which will be published later this year.
6) How may readers purchase your books?
The book is available at www.amazon.com, www.barnesandnoble.com and on all e-readers. Autographed copies are available through my website at www.sandraottey.com.
7) How far would you like to see this project evolve?
Seeing my work on screen is my ultimate goal. 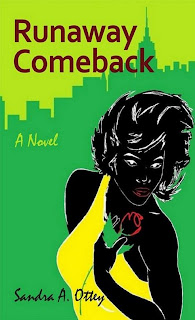 Book Runaway Comeback by Sandra Ottey
Runaway Comeback’s heroine is Rose Thorn, a high school dropout who flees her native Jamaica after years of physical and mental exploitation and voyaging over intercontinental waters way too many times. She hides out in Brooklyn with her young daughter. Rose believes she was dealt an evil hand in marriage because she was a high school dropout, teenage bride and mother. In her quest to realize her dream of pursuing a college degree, she is reunited with her soul mate, Calvin Jones. Rose is ready to divorce her conniving husband, Donovan, but is she really ready to marry Calvin?
Forced to return to Jamaica, Rose finds herself trapped in a devastating situation that could jeopardize a lifetime of happiness with Calvin. With the help of her grandmother who raised her, Rose quickly realizes that in order to make a comeback she must turn around and go back to the place where it all started, the place where she first believed, the place where trouble had come and uprooted her.
Set against a backdrop of rolling hills in Jamaica and the pavements of Brooklyn, the storyline is thought-provoking and enthralling with true-to-life characters and situations. Runaway Comebacksizzles with secrets, payback, and redemption.
Excerpt:
Rose Thorn tapped her heel impatiently on the aircraft’s carpeting. Was this plane ever going to land? She shifted in her seat against the confines of her seatbelt as fear slithered down her spine. She swiveled her head for the umpteenth time and let her eyes roam behind her midnight-dark shades as she surveyed the other passengers on board. She still didn’t notice a familiar face and no one seemed to recognize her either. Still, anxiety continued to hold her in its jagged jaws.

Rose tapped her heel some more and nibbled nervously on her bottom lip. She dipped into her handbag and retrieved a small mirror. The curly blond wig under her wide-brimmed Fedora was not her style. Even with the aircraft’s cool temperature her scalp was sweating underneath it, or maybe it was just her nerves, she thought. She pulled the hat halfway down her forehead, just above her professionally pruned eyebrows. She painted on midnight purple lipstick against her caramel-colored skin to add to her getaway disguise. The dark Addams Family–style lip color matched her strapless jumpsuit, but it wasn’t on her list of lipstick shades. She shrugged. Personal fashion was not a priority today. It wasn’t even an option. Today was runaway day, and she was dressed for the part.

In the window seat of the aircraft her daughter, Crystal, tugged at the floppy straw hat Rose had placed on her daughter’s head. Rose had helped her put on a change of clothes she had stashed in their small piece of luggage. On the way to the airport, in the backseat of the getaway car, Crystal had changed out of her school uniform and was now wearing a faded jeans pantsuit, white camisole and black strappy sandals.

She remembered the horrific story she had concocted and told Crystal’s teacher earlier that day just outside the classroom door while Crystal’s friends gazed up from their test papers at her with innocent, inquiring eyes. She had shown up at the school well over an hour before it let out. She had painted on the most distressing facial expression and told Crystal’s math teacher in a tear-jerking voice, “There has been an accident and my um…my husband…he’s hurt and… he’s asking for Crystal.”