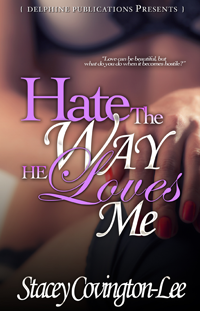 Hate The Way He Loves Me

Zoe Shaw’s childhood was anything but perfect. She, her sister, Pam, and their mother, Martha, were terrorized by Otis Shaw. The man that vowed to love and protect them had become a drunken, abusive animal that took pleasure in their suffering. But when he begins to look at Zoe with lover’s eyes, she finds herself taking drastic measures to ensure that he’ll never hurt any of the Shaw women again, or so she thinks. When word gets out that Otis may be resurfacing, Zoe, being the strongest of the trio, decides that it’s time for them to move away and start anew.

Desmond Page, Zoe’s best friend, moved away a long time ago. Having had a difficult childhood of his own, he and Zoe found love and acceptance with one another and did their best to shield each other from harm. Now that she’s looking to relocate, he suggests that she join him down south.

Their new home offered everything the Shaw women ever wanted; peace, security, opportunity and even the possibility for love. When Ramon Martinez introduced himself to Zoe, the attraction was undeniable. And despite her better judgment, she allowed herself to fall for the uncommonly handsome business owner.  What she didn’t realize was that he was also the product of an abusive home, but unlike her, he chose to follow the example set by his father. His jealousy and insecurity led him to deliver painful consequences for what he deemed inexcusable behavior. But he has clearly underestimated Zoe and the question now is which one of them will survive this battered love?


Excerpt from Hate The Way He Loves Me

Zoe’s phone rang again and when she saw it was Ramon, she simply put it back in her purse, said her goodbyes to Martha, and headed home. A little while later she pulled up to the house and was annoyed to find Rich’s truck parked in the driveway. She was not in the mood to deal with company, especially Rich. He was the biggest, most arrogant jackass she’d ever met. She’d only met his little mousy girlfriend, Candy, once and after ten minutes in Rich’s presence she felt nothing but pity for his girlfriend. Zoe walked into the house and politely said hello, but she never broke her stride as she headed for the bedroom.
“Where you going, babe? I haven’t seen you all day. Don’t you want to sit out here with us and catch the end of the game?” Ramon asked.
Zoe paused for a moment. “Thanks, baby, but I’m exhausted. I think I’ll just head on back and get ready for bed,” she replied as she tried to continue on to the bedroom.
“Well, will you at least throw us a couple of sandwiches together before going back?”
“How long have you been home Ramon?”
“A couple of hours, why?”
“Babe, you could’ve prepared a full meal by now. I’m really tired and it won’t take you but a minute to slap some mayo and ham on some bread.” Zoe turned and went on in the room and closed the door.
“Damn, man, whose house is this? Cause it looks like she’s running things. I wish the hell Candy would talk to me like that or walk out on me,” Rich bellowed as if he were trying to insight a riot. He leaned back into the sofa with his round belly still sticking out as if he were eight months pregnant. His hair slicked back into a ponytail made him look as if he were some sleazy used car salesman. He kept staring at Ramon with those beady eyes waiting to see his friend’s reaction.
As if he were a twelve year old, Ramon was unwilling to look like a punk in front of his friend. Without hesitation, he took off towards the bedroom. What he didn’t need was more encouragement, but that slimy, no good Rich offered it anyway.
“That’s right, bro. Go handle your business.”
Ramon stormed into the room slamming the door behind him. Startled by the loud noise, Zoe jumped and looked around to see Ramon fuming.
“What’s wrong, babe? Did something happen with you and Rich?”
“No, something happened with you. How are you gonna come up in here and embarrass me like that. You roll up in here and act like you’re too good to hang out with me and my boy and then refuse to fix a couple of sandwiches. You need to get your damn clothes back on and come out here and fix us something to eat!” Ramon demanded.
“You sound like a crazy man! When my friends are here you won’t even speak to them. At least I acknowledge that animal you call a friend. And y’all are grown ass men perfectly capable of fixing a sandwich. I’m going to bed. Goodnight!” Zoe shouted as she slipped her shoes off. But Ramon walked up on her and grabbed her by the arm. He dug his nails into her flesh so hard that she immediately began to bruise, and when she still seemed unwilling, he dug in until he drew blood. “Ramon, I swear if you don’t let me go I’m calling the cops,” she threatened, trying her best not to cry.
“What you’re going to do is take your ass out there, fix us something to eat, and act like you’re glad to do it.” He never let go of her arm as he shuffled her out of the room and into the kitchen. As they passed by Rich, they could hear him shouting words of encouragement to Ramon.

What inspires your writing?

I’m inspired by those around me, the people that I observe on the daily basis. Everyone has a story, everyone is trying to overcome something. It’s these situations, these struggles that tend to translate into the best stories.

Hate The Way He Loves Me focuses on domestic violence. What separates your book from other books with the same focus?

My novel is not the typical “poor victim” type story. This book is full of unlikely heroes and twists that you’ll never see coming. It’s an emotional story that you can’t help but get caught up in.

Was any part of this book based on real life experience?

While this book isn’t based on my experience, it was inspired in part by my experience. Many years ago I found myself in an abusive marriage. Fortunately I was able to get out of that situation and go on to make a good life for myself with a wonderful man.

Would men also find your novel interesting or do you view it as a “chick novel?”

There is definitely something in this book for everyone, including male reader. Women are not the only ones that suffer abuse and this novel shows just what can happen when boys/men are the victims of abuse.

As an author do you feel obligated to tackle social issues?

Not at all. As an author I feel that my obligation is to entertain. However, if I can use my writing to shed light on some very relevant social issues, why not do it? Raising awareness, imparting knowledge through my writing is truly a gift.

What can we expect from you in the future?

I’m currently working on a couple projects that are sure to be wildly entertaining and hoping to have one released in spring of 2015.

What advise would you give to an aspiring author?

I would tell them to be true to themselves. Don’t change your writing or try to do what you think will sell. Write what you’re passionate about, write in your own voice. And once your story is written be ready to do the serious work of promoting and building your brand. 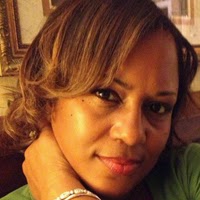 Having fallen in love with literature at an early age, it only made sense for Stacey Covington-Lee to seek a career that would allow her to combine her passion for writing and her Communications education from Savannah State University. During her lengthy career in the insurance industry as an Instructional and PC Trainer, Stacey wrote and developed multiple training guides and manuals for both insurance companies and local government.

It was at the encouragement of a dear friend that Stacey wrote and released her first novel, The Knife In My Back. Continuing her exploration of love, friendship, and betrayal, she has since given us The Knife In My Back 2, Bitter Taste Of Love, and her much anticipated, Hate The Way He Loves Me.

Stacey is an Atlanta native and has found great enjoyment in visiting book clubs and speaking at various events throughout the Southeast region. She loves hearing from readers and invites everyone to visit her website, www.staceycovingtonlee.com, follow her on Twitter (@covingtonlee) as well as Facebook (www.facebook.com/staceycovington-lee) and Instagram (scovingtonlee).