Please join me in welcoming the paranormal romance and urban fantasy author, Jordan K. Rose to Conversations today! Jordan's is here to talk about her new anthology Call Me Valentino: One hero, Different Worlds! So be sure and check out the cover, blurb and excerpt below, and fall in love this Valentine's Day! 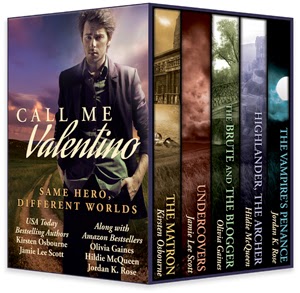 THE MATRON by Kirsten Osbourne
Since being widowed, Cassie Morgan had devoted her life to the orphans in the orphanage she'd managed. When a new church took over the orphanage and decided to turn it into a boys' home, she was both frightened and unsure about how she would make things work for the girls. Being told she had to take fifteen young ladies all the way to Texas from New York didn't make her feel better.

Valentino Hayes had spend his entire adult life searching for the younger brother he vaguely remembered. Just after finding a lead that would send him to Fort Worth, he was offered the job of driving a bus full of orphans to Texas. He jumped at the chance, knowing he needed to not only find his brother, but work while he was searching. He didn't plan on Mrs. Morgan's love for the children to turn his head. Could he convince her to travel with him? And how was he going to provide for a wife while he was still searching for his brother?

UNDERCOVERS by Jamie Lee Scott
When FBI agent Valentino "Vin" Jackson's undercover sting operation goes bad, he teams up with Special Agent Ellis Boyd of the DEA, who has some special talents of her own, to take down a drug ring working for the Mexican cartels.

THE BRUTE AND THE BLOGGER by Olivia Gaines
Tino Boehner was up to his ears with Ebony Miller’s pot shots at him on her blog. Just as he was trying to figure out how to turn the tables, fate dumped her in his lap. Seizing the opportunity, he made her an offer she couldn’t refuse; come work by his side for a month.

A month can be a lifetime, or just enough time to make a man want to change his brutish ways.

HIGHLANDER, THE ARCHER by Hildie McQueen
Valent made an oath to protect the McLeod clan after they rescued him as a foundling. However, after years of mistreatments at the Lairds hands, he questions his obligation to uphold his promise.

When a rival clan attacks and kills her brothers, Ariana McLeod's world is turned upside down. That she's fallen in love with the handsome archer, Valent, is a complication and a blessing at once. Amidst battles, revelations and treachery, is it possible to expect their love to triumph?

A VAMPIRE'S PENANCE by Jordan K. Rose
The chain of events set in motion when Rafe Valentino tries to stop his brother from making the stupidest decision of his life borders on deadly. Rafe goes from being one of the most terrifying creatures to walk the earth to requiring around the clock nursing care. As if being physically injured wasn’t enough, the senior member of The Vampire Guard has no choice but to reveal the heinous secret of his past in order to protect nurse Maddie Van Kool from throwing away her life on him.

Pre-Order CALL ME VALENTINO for only 99¢ now!
Amazon / Barnes and Noble / Kobo / iBooks

Excerpt from A Vampire's Penance from the Call Me Valentino anthology by Jordan K. Rose

This certainly was not the first time Maddie Van Kool had seen a naked man. On the contrary. As a nurse at Golden Pastures Nursing Home, she’d seen plenty of naked men. Of course, they’d all been damn close to 100 years old and wrinkly and dangly, but they were men, and she’d had the obligatory peek at their naked bodies while bathing them. You had to look if you were completing a skin assessment.
In nursing school there’d been other male patients who’d been on her assignments as she learned the proper care of catheters and surgical preparation and other such procedures that would leave a patient exposed.
However, there had not been one, not one that came even remotely close to competing with Raffaele Valentino. Not one. Ever.
The mold had certainly been broken when he was made. Six-two, dark hair, gray eyes. Broad shoulders and chest and nice everything else. He was, generally speaking, a sight of true perfection. Though, tonight was clearly not one of those nights.
She donned her rubber gloves, ensuring they came up and over the sleeves of her gown, which hung long enough to touch the tops of her rubber boots. Then she checked the gauge on the shower nozzle.
“I think it’s ready,” she said from behind her face shield. “I’ll be as gentle as I can.”
“Yeah, you do that,” Rafe growled then let out an annoyed sounding sigh. “Let’s get this done.”
Seated on the shower chair in the infirmary’s fifteen-foot shower he looked enormous. His muscular frame dwarfed the little plastic seat. Beneath the angry red and festering sores his shoulder muscles rippled. He’d insisted on using the shower chair instead of lying on the specially built table that would allow her to rinse him and turn him without disrupting him too much. He held on to the chair for dear life.
Maddie was certain if she bumped him, she’d knock him right out of the seat.
Stubborn. That was the second word that came to mind whenever she thought of Rafe.
The first word was, of course, drop-dead-gorgeous, which, although technically three words always sounded like one when she thought of Rafe.
For as long as she’d known him, he’d been stubborn. Maddie wondered what he’d been like as a human. She’d never dared to ask, too afraid he’d tell her to mind her own business.
He wasn’t a man of many words, especially not with her.
She brought the shower hose up to the back of his head and let the delicate lukewarm water spray his hair.
Rafe hissed and jerked away. “Damn it woman! What’s the sprayer set on? Needle pricks?"
Turning the nozzle away, she apologized. “I’m sorry. It’s only set to mist. It doesn’t get any lighter than this.”
The arm rests creaked under his hands, yet, he sat up straight. “Turn it to an even flow. A full flush of water is better than thousands of tiny stings.” He faced forward, head angled down at his feet. “Didn’t they teach you that in nursing school?”
“No. We never covered the care of vampires.”
“You must have been absent that day.”
“I never missed a day.” She switched the nozzle to a full flow of water and checked the temperature once more. “And as I recall the class on post-mortem care did not even hint of vampires. We were trained to expect the dead to remain dead.”

Jordan loves vampires. But if you know anything about Jordan, you already know that detail. What you didn't know is that it wasn't long ago she began writing about them.

A few years back Jordan received a copy of Stephenie Meyer's Twilight from her husband as part of her anniversary gift. By the end of that week she'd read the entire series and moved onto Anne Rice's Vampire Chronicles. Eight weeks and eighteen vampire books later the idea for her first book, Perpetual Light came to her followed very quickly by Eva Prim.

Jordan is a member of the national Romance Writers of America organization and several chapters.

When she's not writing about one vampire or another Jordan enjoys spending time with her husband, Ken and their lovable Labrador, Dino on the beautiful beaches of New England.