Professional archaeologist and four-time Golden Heart® finalist, Rachel Grant is the author of the popular Evidence Series of romantic suspense novels. BODY OF EVIDENCE is the 2nd book in her popular series and for the first time, it will be FREE on all platforms from 10/1 to 10/9.  (Each can be read as a standalone novel, so feel free to jump in if you're new to Rachel's books!) 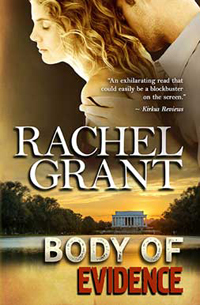 And she thought facing a firing squad was bad…

When archaeologist Mara Garrett traveled to North Korea to retrieve the remains of GIs lost in combat, she never imagined she’d be arrested, convicted of spying, and sentenced to death. Her only hope is Curt Dominick, the powerful, ambitious, and infuriatingly sexy US attorney prosecuting her uncle, a former vice president of the United States.

What starts off as a rescue mission quickly morphs into a race across the Pacific. Someone is after Mara, and they’ll risk everything to stop her from reaching Washington DC. With betrayal around every corner, Curt and Mara have little reason to trust each other and every reason to deny the sparks between them that blaze hotter than the Hawaiian sun. Still, desire clashes with loyalty when they discover a conspiracy that threatens not only their lives but the national security of the United States.


Download BODY OF EVIDENCE for FREE while you can!

Rachel Grant worked for over a decade as a professional archaeologist and mines her experiences for storylines and settings, which are as diverse as excavating a cemetery underneath an historic art museum in San Francisco; surveying an economically depressed coal mining town in Kentucky; and mapping a seventeenth century Spanish and Dutch fort on the island of Sint Maarten in the Netherlands Antilles.

In all her travels and adventures as an archaeologist, Rachel has found many sites and artifacts, but she’s only found one true treasure, her husband, David. They met while working together excavating a four thousand year old site about to be destroyed by the expansion of a sewage treatment plant in Seattle. Despite their romantic first meeting, she has no intention of ever setting a story at a sewage treatment plant.

Rachel Grant lives on an island in the Pacific Northwest with her husband and children.