Please join me in welcoming New York Times bestselling author Rebecca York to Conversations today! Rebecca is here to talk about her new paranormal romantic suspense novel, BOXED IN and it's priced at just 99¢ as a new release special price for the month of June. BOXED IN is the 16th Decorah Security Series book, but can be easily read as a standalone novel. So be sure and check out the cover and blurb below! And don't forget to check out her bio too and get to know Rebecca York. 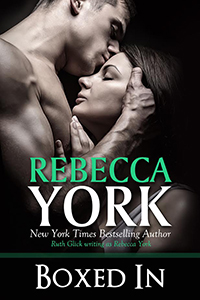 Olivia Weston is sure her boss has imported a shipment of stolen antiques. And when Decorah agent Luke Garner handles one of the items, an ornate puzzle box, the spirit of a warrior, locked away for centuries, takes possession of his body. Zabastian, the guardian of the box, forces Luke to help him return the object of power to its rightful owners. As Olivia sees Luke change before her eyes, his transformation both frightens and arouses her. And both men who inhabit Luke’s body want her. But they must also learn to work together to protect the mysterious artifact from a trio of murderous thieves who will risk anything to steal the prize. And in the end, will the warrior allow Luke and Olivia their happily ever after?


Purchase BOXED IN for only 99¢!
Amazon | Barnes and Noble | Kobo

A master of paranormal romantic suspense, Rebecca York is the author of over 150 books. A New York Times and USA Today best-seller, she has written paranormal romantic thrillers for Berkley and romantic thrillers for Harlequin Intrigue. Her romantic-suspense series, Decorah Security, is set at a detective agency where agents have paranormal powers or work paranormal cases. She also writes an Off-World series where each story is a science fiction romance taking place on a distant planet in the far future.

The first of her Berkley Sensation paranormal romantic suspense novels, KILLING MOON, was a launch book for the imprint.

She also wrote the popular 43 Light Street series for Harlequin Intrigue. In addition, as Ruth Glick, she has authored or co-authored 15 cookbooks.

Rebecca’s many awards include two Rita finalist books. She has two Career Achievement awards from Romantic Times: for Series Romantic Suspense and Series Romantic Mystery. NOWHERE MAN was the Romantic Times Best Intrigue of 1998, and the book was selected as one of their Reviewers' "all-time favorite 400 romances." In addition, she received the 1998 Affaire de Coeur's Critics Choice Award for Best Contemporary Novel, also for NOWHERE MAN. Ruth's book, KILLING MOON, won the 2003 New Jersey Romance Writers Golden Leaf Award for best Paranormal. AMANDA'S CHILD won the 2001 Golden Leaf Award for Long Contemporary and was nominated for Best Intrigue of 2000 by Romantic Times. She is one of a small group of authors to have won the Romance Writers of America Centennial Award.

Ruth and her husband travel frequently to research settings for novels and taste new dishes for cookbooks. Her many unique experiences are apt to end up in her books--like the time she encountered a coral snake in the Guatemalan jungle or took a flight in a glider plane.