On Conversations: Shampriest Bevel talks about Today, I Marry My Best Friend: Myself!

It is my pleasure to take a quick break from my Texas Hearts blog tour to introduce you to a fabulous author,  Shampriest Bevel (Sham).  Please sit back with a cup of coffee and enjoy this interview and write up of her new book Today, I Marry My Best Friend: Myself.
Lisa 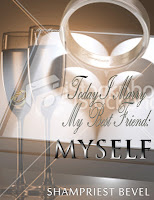 A woman spends her entire life planning the details of her wedding day, and the minute she believes she’s met Mr. Right, she starts planning their wedding, imagining what features their children will inherit, and decorating and designing their first home – all on the first date, before dessert is even served. After spending almost a lifetime planning her princess fairytale, though, what will this woman feel like when she learns she may never marry? Does a bride need a groom in order to be a bride?

Talia Sands, who is very ready for marriage, is left broken-hearted after five years by a man who she learns is having an affair with the neighborhood trick. This becomes a turning point for Talia, as she decides not to allow a no-good man to destroy her dreams of marriage. After she has an epiphany about the root of marriage, which is love, Talia decides to marry herself as a symbol of self-commitment and self-love. Today, I Marry My Best Friend: Myself tells the story of how a woman can stop tirelessly and painfully waiting for a man to ask for her hand in marriage, instead following Talia’s lead by getting her middle finger sized, purchasing her own wedding ring, and marrying herself.

Excerpt:
Now she was ready for marriage, but her current boyfriend didn’t seem to have the word in his vocabulary. And this time, she didn’t have anyone waiting in line to be next. He seemed to be the last of the Mohicans. Just because a woman doesn’t have any other male options, does she have to settle?

Talia had been dating Abel for five years. When was he going to propose? She was still the same person that all the other men seemed to love. She was still the same woman that they all wanted to marry. There wasn’t anything that she hadn’t done with or for him. Although she’d always planned for her career to come first, she learned there was more to life. She wanted to come home every night to someone who promised to love her always. She was tired of having an empty bed unless Abel wanted to come over for a pitiful quickie. She wanted more from life. She knew her plan to become partner at her firm was taking a little longer than expected, but she knew it would eventually happen. But this marriage thing…not so much.

Wherever she turned, marriage seemed to be the topic of discussion. Either something related to weddings or marriage always surrounded her. Was this some kind of sign for her? She decided to confront Abel one more time about marriage. What did she really have to lose? Lately, she wasn’t sure why she was still in the relationship. She waited for Abel to come over to her house. She didn’t want to have the conversation on the phone; if she did, he’d just pretend to have something else to do and get off the line. Before Abel could even come in the door good enough, she started her “wedding” interview questions again.

Do you ever plan on getting married?” Talia thought maybe she’d start with trying to create the big picture. Maybe he wanted to get married one day – just not to her.

“Not again, Talia. Where’s all of this coming from?” He thought he was just coming over for his usual Friday night home cooked meal. He could tell it was going to be a long night.

“I was just thinking. I have the right to ask after five years. Well, what do you have to say?” Talia was tired of validating why she needed to know his position on marriage. She believed he needed to be honest.

“I don’t know. I’ve never seen myself as the marrying type.” Maybe if he just stayed in-between “Yes” and “No,” he’d be safe…at least until he could get some of Talia’s cooking. He could smell her baked-from-scratch cheddar and garlic biscuits coming from the kitchen.

“When will you know? I don’t believe it takes a man five years to learn if he’s going to marry a woman or not.” Talia could see him looking past her to the kitchen. Was this louse more interested in dinner than in her?

“Some men take longer than others. You can’t rush a major decision like this. If I marry a woman, I want it to be forever. I’ll know when or if the time is right.” Abel was hungry and becoming more and more aggravated by her questioning. He wasn’t prepared for all of this, and he wouldn’t have bothered to come over if he knew this was to be expected. He would have just gotten Ruby Tuesday’s curbside-to-go and went over to his side chick’s house, La La. La La didn’t want to be married; all she wanted was to get turned out with no strings attached.
“You never had any intention of ever marrying me. I think I already knew that; I just had to confirm it. I can’t believe you’ve been stringing me along for all these years. If you knew I was serious about marriage and you weren’t, you should have stopped dating me. Why did you continue to date me? What did I ever do to you?” It took everything in Talia not to let Abel see her cry. She was too strong for that. He didn’t even seem sincere in his responses to her questions. He was acting nonchalant. Maybe if she wasn’t so smart, she’d fall for his bottomless answers. Talia had wasted five years with Abel, but she decided that she wouldn’t waste anymore. She knew she shouldn’t be waiting on any man; he should be waiting on her.

“Whatever, Talia. Let me get out of here. Call me when you stop tripping. I understand you must be fired up from seeing one of your little WE or Lifetime TV shows.” Abel was over it, and he knew to jet before she got any more heated. For a minute, he thought he should ask for a plate to go. What else was she going to do with all that food? She could at least hook her man up with a biscuit. But the look on her face told him not to say another word. He picked up his overnight bag and started to leave.

“Tell La La I said she can have you.”

Shampriest Bevel, simply known as Sham, is a poet, writer and educator from Bronx, New York. Since the age of seven, she has used poetry to confront obstacles and relinquish emotions. While attending Norfolk State University, she joined Epsilon Theta Chapter of Delta Sigma Theta Sorority because she wanted to be a part of a powerful and purposeful sisterhood. She graduated from NSU with a Bachelor’s in Biology. In 2005, she self-published, Therapy for the Soul’s Pain, to share her collection of therapeutic poetry. Commentary from the Writer’s Digest 14th Annual International Self-Published Book Awards described her poetry as “lyrical and smooth, similar to Nikki Giovanni” and “Langston Hughes Blues Era”. Her exposure to the lighter side of publishing inspired her to challenge herself to write a fiction novel.

She was awarded with the Honorable Mention Award for poetry at the 2011 Hampton Roads Writers’ Conference. After attending Christopher Newport University’s Writer’s annual conference and becoming an avid reader of Mary B. Morrison, she decided to begin her soon-to-be released fiction novel. The book, Today I Marry My Best Frien: Myselfsummarizes both the hopeless quest of women waiting to receive a proposal of marriage and their journey to commit to themselves.

1. Why did you choose to write women’s fiction?
I wanted to write stories and develop characters who I could not only relate to but also live through. It was important for me to speak to an audience who could handle my voice. Writing women’s fiction is natural for me because I love girl talk with purpose.

2. Do you work with an outline, or just write?
I’ve always wanted to try to write with an outline but that just doesn’t work for me. One day I’ll just get a feeling and I’ll start writing. I don’t know what I’m about to write, but my hands just get to moving. Most of the time, I shock myself about what I’ve written. I never know what direction my characters are going to take. I never know what the next chapter will introduce. The only thing I know is when it feels like I’m coming close to the end of the book.

3. Are there certain characters you would like to go back to, or is there a theme or idea you’d love to work with?
I plan on going back to a few of the characters from Today I Marry My Best Friend: Myself. One of the characters, Jazmine Lilly is already scripted as a main character in another women’s fiction novel. As far as themes, I feel comfortable telling the stories of single women in today’s world.

5. What advice do you have for someone who would like to become a published writer?
The best advice I can give is do your research, network with fellow authors and never give up. You may get hundreds of rejections but don’t stop submitting your manuscript. Rejections just mean that your project is not right for that particular agent or publisher. When the time is right, it will happen. Don’t be afraid to ask questions.

6. When did you realize you had a passion for writing?
When I wrote my first poem I knew writing would be my friend for life. As a shy child, I didn’t know how to express what I was feeling. Writing allowed me to say whatever and be whoever. I started keeping a journal of poems at the age of 7. Up until this day, I still write poetry to walk me through some hard times.

7. What do you want your legacy as a writer to be?
I want my legacy to be that I cared about what I had to offer to not only my life but the lives of others. I want people to connect to my work and understand my characters. As I continue to write about the struggles and challenges of women, I want people to know that women should be valued, respected, and honored.