This week I am leaving to go to the Romance Writers of America annual conference in Anaheim, CA.  As a treat, I have pre-loaded my blog this week with the first chapter of some of my books.  Please check back every day to get a new chapter.  I will see you all when I get back and fill you in on the happenings at the RWA conference.  Enjoy!!

THE KNIGHT AND MAGGIE'S BABY by Lisa Mondello 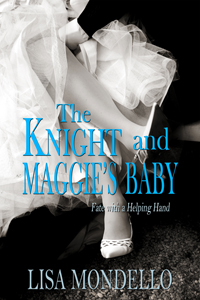 Jonah Wallace knows what it’s like to grow up without love.  Despite having more money than the Queen of England, his childhood was cold and stale as he grew up in boarding schools.  He’s dedicated his life to helping homeless and displaced children find the love and support they need by creating the Haven House Foundation, work that resulted in him being knighted by the Queen.
Now that he’s living in America, his work is going along just fine…until his grandfather gives fate a little nudge by insisting he take a wife before he can inherit.
Coffee shop owner, Maggie Bonelli, is pregnant and the baby’s dad has gone AWOL.  She knows too well the pain of growing up without a daddy.  So when Jonah Wallace comes into her shop proposing marriage for a year, she takes him up on his offer, even if it’s only for a year.  Live in a mansion and give her baby a name and a daddy to call his/her own.  But can they keep their perfect arraignment strictly business…or will fate’s helping hand bring them love at last?