Please welcome historical romance author Jill Hughey! She's here to talk about unloved heroines and her recent release, Little Witch: Historical Romance Novella, the fifth book in her Evolution Series. So, be sure and check out the blurb and excerpt below.

I’ve never written a “Cinderella” heroine. By that I mean I’ve never created a woman with absolutely no one who loves her or advocates for her. I realized, though, as I began to plot my recent release Little Witch: Historical Romance Novella, that none of my medieval heroines had an intact family. Even though they had not been abandoned, they were, in some sense, on their own. So, as I thought about my new girl, Salena, I decided that she would live in a safe home with a father, mother, older brother, and sister-in-law, all alive and well and very supportive of her.

The appeal of the completely unloved, solitary heroine is that the love and acceptance she finally finds with the hero feels that much sweeter. She deserves his devotion. She has earned his comfort and support.

The problem a heroine from a caring background presents is that her peaceful existence removes a big source of potential conflict and emotional payoff. After all, if she has a happy home, there may be nothing for the hero to save her from, which then makes it harder to find sympathy for her. What makes it imperative that the hero falls in love with her? And do we feel like he deserves her if he’s not a prince arriving at the door with a glass slipper, prepared to upgrade his ladylove from rags to satin?

Salena needed some imperfection in her life, so I made her restless in her agrarian setting and had her targeted as the local witch, a label that eventually puts her family at risk.

We, as readers, want her out of her current situation.

I also don’t write helpless heroines, so Salena doesn’t wait for Nox to save her. But when he finally realizes he can’t live without her, he produces much more than a shoe as proof.

Little Witch: Historical Romance Novella is on sale for $.99 at Amazon from November 7 – 11, and is the fifth story in the Evolution Series set in Charlemagne’s Empire.

Thank you, Lisa, for the opportunity to visit on your blog today! 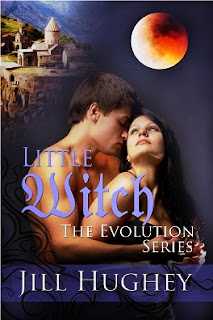 A vicious neighbor uses a series of coincidences to label Salena as the local moon-charmer and outcast in rural Francia. When Salena encounters her brother’s childhood friend, Nox, out on business for the Lord of Ribeauville, she worries he will accept the locals’ tales about her, especially since they relate to the death of his family a decade before. He is, instead, as charmed by her as she is by him.

Nox’s sympathy toward her evolves into affection in spite of his strict rule against close ties with people. Afraid to risk another loss like that of his youth, he abruptly ends their relationship, unaware that Salena has already been downtrodden by her father denying her request to venture farther out into the world.

A threat to Salena’s family prompts her to run away in the hopes of protecting them while forging a new path for her life. Too late, Nox discovers that she has also run away with his scarred heart.

Trees around the church offered patches of relief from the warming June sun. Salena backed away from the building, shading her eyes to see as much of it at once as possible. She finally gave up, dropping her hand to her side, defeated.
“What is it?” Nox asked.
“I will never have the memory of it right in my mind,” she said. “I want to remember it perfectly. I wish I could carry it right back home with me, to look at it when I wished.” She hurried to the other side of the hill where she looked down over the town again. “I envy you,” she said over her shoulder. “You have all of this around you. You come and go as you please and are among people. Look at them, walking in the street and talking. All I have ever known is grass, mud, trees and the river. Suddenly there are all these things I’ve been told about but never understood.”
Nox almost said something light-hearted about sometimes wanting fewer people around. Her forlorn expression stopped him. “There is nothing wrong with grass and trees,” he said.
“The air smells different,” she said, inhaling.
“Smoke and latrines,” he suggested.
She swatted his arm. “You want me to think the worst. But I won’t,” she vowed, bracing her hands on her hips. “I will remember it as perfect.”
“You talk as if your visit here is already over.”
“It will be, too soon.”
“The town isn’t going to disappear.”
“No, the town will be here. Depending on Grant to bring me to the town is another thing entirely.” She sighed. “I feel so trapped at home, Nox. I just do not fit there anymore. I sensed it before, then last night, in Lady Lily’s hall, I could feel myself expanding to fill a new space.”
She tilted her head back. The sun highlighted her full lips, the temptation of them overwhelming the internal warning her words incited in him. “Don’t listen to my rambling,” she said to the sky. “I certainly don’t imagine I belong in that great house.” She sighed again. “I don’t know why I keep blurting these things out to you.” She gave him a direct look. “Actually, that is a lie. I tell you because there is no one else I can tell. I cannot tell anyone in my family. They would be worried or hurt. They would think that something must be done when I know very well there is nothing to do.” She set her shoulders. “Forgive me. Let me go find Grant. You were probably hoping to spend the day with him, not stuck with his awestruck hayseed sister and pregnant wife.” She shifted to walk around him.
“Stop,” he said, indeed wanting to stop her rambling. She confused him, and the desire aroused by his simple touch to her arm alarmed him even more than her declaration that she wanted to leave her home, with an apparent preference for Ribeauville. “You are not a hayseed. I am not exactly sure what you are, but you are not a hayseed any more than you are a witch.”
Those soft lips parted in wonder at his announcement, and the eyes that frightened other people drew him in. He kissed her. On the grounds of the church in full view of anyone who might happen along, he kissed her and drank her in after a tedious month of pretending he was not thinking of her. He pulled her against him despite a long night of convincing himself he had not wanted to do just that the moment she hopped down from the cart yesterday.
She broke the kiss to settle against him, her ear on his chest, head tucked under his chin. Her hands settled on his waist in that way she had that implied a comprehensive possession of his body, the heat of her palms coursing through him like warmed wine.
“I missed you, Nox,” she said, devastating him with the simplicity of the statement.
He did not know how to answer since this had been what he had worried about all along. He had told himself he dreaded her attachment to him. If that was true, how could she feel so perfect nestled against him? How could her words calm him instead of worrying him? He said nothing, but could not stop the momentary tightening of his arms around her before he set her away from him with an internal reminder that he had nothing more than occasional kisses to offer. 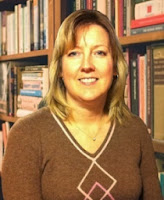 The most interesting fact about Jill Hughey is that she can sing really, really high. As in opera-singer high. But she only does that when she is not writing, working part time as a business administrator, running her two teenaged sons around, and enjoying the support of her wonderful husband. Her ideal afternoon is spent sitting on her front porch with an iced coffee as she moves the characters in her head into her laptop. Happy reading!

If you want to keep in touch with Jill Hughey, she writes a blog at http://jillhughey.blogspot.com, has a Facebook page at http://facebook.com/jillhugheyromance, and tweets from http://www.twitter.com/jillhughey.