Please join me in welcoming author Tiss Devane to Conversations today! Tiss is here to talk about her new novel, Stitching Love. So, check out the cover, blurb and excerpt below. 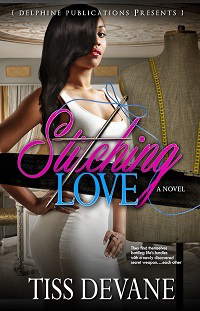 In Part one of this debut series from Tiss Devane, Skyla Richards is a planner. But, all the forethought and organization on the planet can t prepare her for the events that are about to alter her world. After her six year marriage ends bitterly, her job becomes her refuge until Jonathan Bass enters her life. He s a young, handsome co-worker whose future includes an Ivy League opportunity and his upcoming nuptials to an unstable fiancée, Mia. But that doesn't stop him from recruiting Skyla to help him sew a few wild oats before the clock winds down on his bachelorhood.

His relentless pursuit has her tossing her to-do lists into the fiery flames of passion and reacquaints her with feelings she'd long since forgotten. And her feminine wiles has him rethinking his engagement and ultimately, taking a ring off of it. But while their hearts continue to align, their careers split into opposite paths when she gets promoted and his Princeton plans are jeopardized when his manager accuses him of dark and menacing acts. With Skyla's assistance, he rebounds and the two resume their future plans. But while they've been ring shopping and deciding wedding dates, Mia has been sulking and contemplating the fastest way to bring their relationship to a shattering demise. And what she comes up with will permanently transform all their lives.

We gazed out at the skyline in silence.  He reached back and cut my desk lamp off leaving only the city scene outdoors illuminating the room.
“Sometimes, I could just look up at the stars all night,” he said, staring at the sky in wonderment.
“You have that kind of time?” I asked, looking up at the sky.
He turned to me and with a piercing look replied, “I make time for beautiful things.”
I could feel myself blushing and started fidgeting with my Blackberry.
Just then, he leaned into my neck and inhaled deeply.
“Damn, you smell good,” he whispered, allowing his lips to brush lightly against my earlobe.
My palms started to sweat as he moved closer.  I quickly turned to cut my lamp back on and dropped my Blackberry.  He bent to pick it up and placed his face as close to my leg as possible, blowing on it while slowly standing. My flesh tingled as the warmth of his breath traveled up my calf and reached my thigh.
“Here ya go,” he said in a low tone, handing it to me.
I clumsily took it, inadvertently hitting the send button on the earlier reply I’d typed Phillip.  But I didn’t care.
He sat on the edge of my desk and swallowed my hand with his while drawing me between his legs.
“What did you want to talk about?” he asked, taking his fingertip and gently sweeping a portion of my hair behind my left ear.
“Oh….um, um…” My brain searched for words while my eyes became stuck on his lips. “It’s Angelica,” I said.
“Yeah, what about her?” he asked, continuing to come closer.
My heart started racing and I felt weak.
“She…she’s gotta do something,” I mumbled.
“Something like what?” he whispered, lips lightly grazing mine.  I wanted to pounce and run away at the same time. 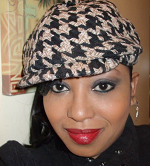 Tiss Devane hails from the Southside of Chicago and wears many hats including mother, wife, business owner, columnist and now romantic novelist. Some of her other literary efforts range from poetry to political commentary. But her first love is fiction. Her passion for storytelling can be traced back to the often funny but always captivating stories she heard while growing up which ignited her imagination and sparked her creativity.