Please join me in welcoming author LaShanta Charles to Conversations today! LaShanta is here to talk about her new novel, Splitting Karma. So, check out the cover, blurb and excerpt below. And don't forget to check out her interview too, and get to know LaShanta Charles! 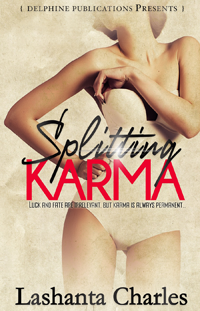 Taylor Williams didn’t grow up with the loving parents, white picket fence, and a dog. She’s struggled to get where she is and knows that with all she’s endured, life can only get better. At 28 years old, she hails as one of the country’s top divorce lawyers and is ready to slow down and start a family with her husband. The only problem is he shuts her out and has treated her like everything but a wife since the night he came across her and his boss in a compromising situation. In spite of her innocence, she’s determined to make it up to him.

Isaac Warren is bad business; the kind of bad business that requires focus and determination in order to stay alive. It’s also the kind that caused him to shut himself off from serious relationships after the brutal murder of his fiancé three years ago. Now his cold exterior keeps him at bay from everyone except those he considers family and right now that list doesn’t have room for anything more than the occasional tryst and nothing more, especially not with the highly acclaimed lawyer he’s accidentally stumbled upon.


*This novel is only recommended for readers 17 and older*

My eyes flew open as I quickly sat up in the bed. What was that noise, a door slamming? I scanned the dark bedroom and waited for another sound. The voice I heard shouldn’t have surprised me, but it did.
“Where the hell is my dinner?” Aaron’s voice boomed through the house.
I scrambled from the bed, falling to the floor, my feet tangled in a mess of sheets and blankets. Ignoring the pain in my wrist and hip from my ungraceful fall, I slipped my robe on and practically ran down the flight of stairs.
“Taylor, get your ass down here! A good wife wouldn’t let her husband go hungry!”
I spotted him standing in front of the open refrigerator, his back to me. Without a word I made my way to the oven where his food was already fixed and waiting. I could feel his eyes on me, tracking my every movement as I slipped in front of him and grabbed a beer from the fridge. I refused to meet his eyes. Instead I stole a glance at the time on the microwave. It was a quarter past three. Working late again, huh? “I made you shrimp carbonara. I hope you like it,” I said as I placed the beer and food on the island in the center of the kitchen. Finally meeting his eyes, I pulled the stool out for him. He said nothing, simply stared at me. My heart pounded in my chest. Why wasn’t he responding? “I kept it warm for you,” I said as I closed the refrigerator and took his hand. Without protest, he let me guide him to his seat. I tried to give him a quick peck on his lips, but he turned his head away. A smirk played at the corner of his lip. My lips settled for his cheek and I stepped back. “How was your day?” I asked.
“I want to take a shower when I’m done eating,” he replied.
And just like that, I was dismissed. I took my time going upstairs, hoping he’d call me back. I could at least get a hug, right? I knew that would never happen, but that didn’t stop me from lingering on the stairs. The only sound that came from his direction was the fork as it scraped the plate and the occasional soft thud from him placing his beer bottle on the counter after he sipped. By the time he made it to our bedroom I had a fresh pair of boxers and pajama bottoms laid out for him and the shower was the perfect temperature. He undressed as he made his way past me in silence. I quickly scooped up the trail of clothes he left in his wake. While he showered I tossed his towel into the dryer, so that it’d be warm for him when he used it.
“Dinner was actually very good. I’m impressed,” he said when he finally emerged from the bathroom.
“Thank you. I’m glad you liked it.” I tried not to be, but I was mesmerized by his body. At 32 years old, he looked just as good as he did when we first met and he was only 25. His smooth, brown skin pulled tight against muscles that teased me with their presence. Not big and bulky, but just right for his 6’ 4” frame. His wavy hair was always kept cut low, cropped close to his head. Beautiful brown eyes stared back at me from behind dark lashes. If he’d smile – which I knew he wouldn’t – I’d see perfect teeth lined up behind those thick lips. He glanced at the boxers on the bed then smiled smugly as I gave them to him. I snapped my mouth shut, realizing he knew I was admiring him.

When did you start writing, and was there a significant event that prompted you to do so?

I started writing while in high school, around the age of 15. I remember writing a “story” that literally never ended. I would pass it along to my classmates and friends for them to read and they would be enthralled and begging for more. I like to think that was my first following! I’ve had a beautiful relationship with writing since then.

What do you enjoy the most about writing?

I enjoy creation! I love when that tiny spark of embers becomes a full blown raging inferno of 80,000+ words. I love the struggle of developing complex characters. I love filling in blanks within my plots, answering questions enough to give you that “aha” moment, but not so much I give you every single detail and leave nothing to wonder. I love seeing a finished product, a work that I put my heart and soul into, knowing that someone somewhere will either love it or hate it and I’ll be fine either way.

What was the hardest part about writing your book?

The hardest part was editing. I wanted to make so many changes (I actually made quite a few); even after my book went to the editor I was still making more changes! Then to receive it back from the editor with critique and suggestions, it was like someone was deciding my newborn baby could only have blue eyes and not brown. It was by far the worst part of it all.

Where do you get the inspiration to write?

I draw inspiration from just about anything, literally. For example, I just saw someone eating an apple – my current heroine will undoubtedly love snacking on peeled apples. I’m inspired by my surroundings, which are constantly changing, therefore I change as well.

Who is your favorite author and why?

I honestly don’t have a favorite author! I know that’s a terrible answer, but there are just way too many for me to pick just one! I’ll read just about anything with a great plot.

What do you like to do when you are not writing? What is your ultimate luxury?

I’m super lazy, so anything that requires physical effort is a no-no! I love to read and I love to eat; and I love to do it all at home alone – no kids, no husband, just me, my food and my books. This can also be applied to different settings such as a beach, an airplane, etc.

Tell us something funny about yourself that not a lot of people know about?

Hmm, I sometimes eat a spoonful of flour…can’t believe I’m sharing this! I’m pretty sure there’s some logical explanation for it and I should probably mention it to my doctor, but nope, I’m good.

I love interacting with readers, so feel free to contact me and let me know how you’re doing or what’s going on with you! 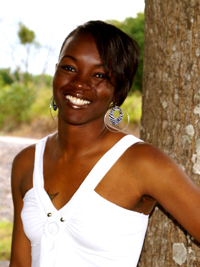 LaShanta Charles was born and raised in the small town of Orangeburg, SC. She has always been an avid reader of all genres, but Urban / African American Fiction has always been her true love and is what inspired her to pursue a writing career. In high school, she began letting her classmates read the short stories that she would write and based off of their feedback, her passion for writing pushed her to become a published author. She published her debut novel, Lovely Lies, in 2013 and released the sequel, Lovely Lies 2, in February 2014. Currently she is preparing to release her third novel, Splitting Karma, along with other projects. In recognition of her work, LaShanta was named National Black Book Festival’s 2013 Best New Author and was nominated for 2013 Breakout Author of the Year through the African American Literary Awards Show. Lovely Lies was also awarded Most Underrated Book of 2013 for the Literary Scream Awards.