Please join me in welcoming the award-winning author, Rachael Slate to Conversations today! Rachael is here to talk about the first book in her Chinese Zodiac Romance series, Trancing the Tiger. So be sure and check out the cover, blurb and excerpt below! 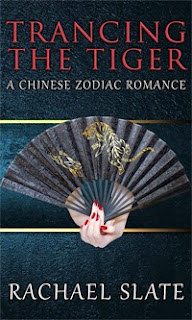 Delve into a world steeped in tradition and superstition…
After her parents become infected with the Red Death, Lucy Yeoh flees to Malaysia seeking answers. Everything in this closed-off section of the world is paradise—from the lush tropical climate to her sexy new neighbor, Sheng…who just might be delusional. He claims the Plague God unleashed the Red Death and only a circle of Chinese Zodiac spirit animals can cleanse the Earth. Even more, he insists she’s one of them: the Rabbit. Long furry ears and fluffy bunny tail included.

He’ll show her how to fight to save the world…
As the Chosen of the Tiger, the burden of restoring balance to the world has fallen onto Li Sheng’s shoulders. When he discovers that the ally he’s long awaited, the Dragon, is actually just the Rabbit, Sheng is quick to dismiss Lucy. If only she’d stay dismissed. Lucy’s Rabbit refuses to cooperate, undermining the authority of his Tiger at every turn…and seducing him to the limits of his darkest desires. He’s not supposed to want her. Not when he needs the spirit circle complete and she’s their weakest link.

She’ll show him a love worth fighting the world to save…
Sheng’s enemies draw closer, and not everyone wants Lucy alive. Together, they’ll have to navigate a treacherous world where a line between duty and their hearts has been drawn between them. They must either sacrifice one, or find a way to surrender to both.


Excerpt from Trancing the Tiger by Rachael Slate

“Do you really believe you’re a tiger? Like, rawr.” She pawed the air, chuckling at her horrendous imitation.
Sheng’s lips thinned, but his eyes crinkled as though he was trying not to laugh. He leaned in dangerously close to her mouth. “Is that the sound you think a tiger makes?”
“Isn’t it?” Her airy words fanned between them. A challenge? An invitation? Can’t tell, don’t care. She was precariously close to finding herself entranced by this sexy, baffling man.
His hand grazed down her back, angling her body toward his, while his other came to rest on her thigh. Her bare, exposed thigh. The hem of the pink lace dress she wore barely covered her lacy thong. His fingertips skimmed along her thigh, sending cascading shivers bursting over her skin.
“Are you going to make me do that thing again? That trance?” The way he stared at her, searching intensely, at once stimulated her and pinned her.
“No,” he murmured. “I will not show you my Tiger again until you are ready. Until your Rabbit has come out from its den.” He stroked her cheek with his thumb, then dropped it lower to part her lips.
“About my earlier conversation with Mei, I didn’t mean I wanted you to kiss me… Unless you want to, that is. Ah…are you going to kiss me now?” Lucy cringed. Way to be smooth, Luce.
The corners of Sheng’s mouth curved, and his eyes flashed with amusement. “Wouldn’t you like to know.”

Rachael Slate resides on the West Coast of Canada with her husband and two children—or as she likes to call them, her own little blended world. One of the best parts about sharing in her husband’s Chinese-Malaysian culture is definitely the food—and the awesome celebrations!

Rachael writes stories that blend the lines between mythology, reality, and fantasy. In her worlds, you’ll encounter strong, sexy alpha males and the capable women who challenge them. And always, scorching hot romance.