Whether it's romance, suspense, or action/adventure—Romancing the Military Man: Ten Hot Military Heroes Boxed Set offers ten romance stories with something for everyone who craves a hot military hero. For a limited time this is your chance to enjoy books from today's New York Times, USA Today, and national bestselling authors. 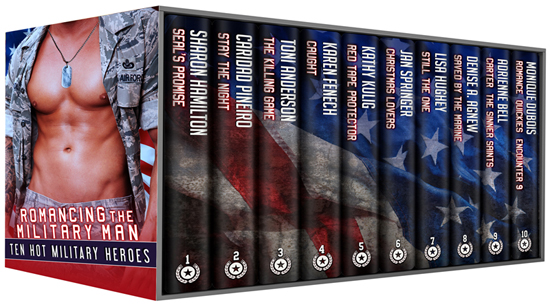 THE KILLING GAME by Toni Anderson
A snow leopard biologist becomes prey when Cold War secrets threaten to expose a modern-day spy ring, and an elite British soldier is forced to choose between his country and his heart.

CAUGHT by Karen Fenech
When Elle Jameson is caught by a human trafficker, she doesn't dare believe the man's claims that all is not as it seems and that he will see her safely home, not even when she finds herself softening toward him, because trusting him, believing him, may cost Elle her life.

RED TAPE PROTECTOR by Kathy Kulig
Black-ops agent is hired to train a secret White House society member to be an assassin or be eliminated.

STILL THE ONE by Lisa Hughey
Jack Stone never got over Bliss Lee…but he can he convince her she’s still the one?

SAVE BY THE MARINE by Denise A. Agnew
Explosive danger creates a whirlwind of heat between a marine and the woman he’s just met when they’re trapped in a terrifying situation.

CARTER: THE SINNER SAINTS by Adrienne Bell
Sometimes a bad boy is the best man for the job.