Please join me in welcoming author Kateri Young to Conversations today! Monica is here to talk about her new release, Shayla's Revenge! So, check out the cover and blurb below. And don't forget to check out her interview too, and get to know Kateri Jeremie! 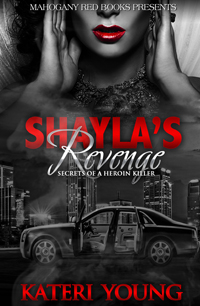 Shayla, a bubbly thirteen year old, destined for greatness, has her world shattered in one day. One daring mistake from her mother puts Shayla in a situation that no young girl should have to endure. At the hands of her own father, Shayla is thrust into a world not made for any small child. She is used and abused on a daily basis, by the one adult that should be protecting her. She falls into a state of utter despair and self-loathing. As she is betrayed repeatedly by the people that promised to love and protect her. Only to use her again for their own financial gain.

Not many make it out. However, Shayla is one girl determined to not become a statistic. She has a purpose, and that is revenge! Revenge on those that stole her innocence and made her a woman before her time. A purpose of finding the love and innocence that still dwells inside of her. Allow Shayla to tell her story of despair that turns into hope. That you will be free and find the love that you deserve, through faith, hope, and determination for a better life. Will she get out? How will she make everyone pay? Will she find that love and career that she yearned for?

When did you begin writing?

I began at the age of 8, after my grandmother died. It was a way for me to talk to her privately.

Who is Kateri? Is Kateri your real name?

I am a simple person. I love to cook, take care of my family, and be an all-around rounded person. I am not flashy, shy, and a little introverted. Kateri is actually my middle name. My name is Cherise.

Where were you born? Where did you grow up?

Do you have any kids? Are you married?

Yes, I have one son who is twenty. He is my heart and soul. I also have two stepsons that I love dearly. Yes I just got married in May to my heart, backbone, motivation, and soul.

What are your favorite genres and Authors?

I love Crime, Psychological Thrillers, and Poetry. I would have to say Maya Angelou, Langston Hughes, and Joh Grisham to name a few.

What is in the future for Kateri? 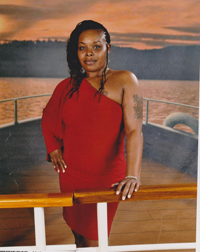 Born on July 4, 1972, in North Charleston, South Carolina. Kateri grew up between NY and South Carolina. Graduating from the last all Black Boarding Schools in Laurinburg North Carolina. After that, she received a degree in Psychology, and later gave birth to a baby boy. She began writing short stories and poems, and then she decided to pursue writing a novel. When it was finished, she tried to get it published, receiving many rejections since the year 2000. She raised her son and attended Culinary School, where she received a degree in Culinary Arts, and has been a Chef ever since. Eventually she opened up Purple Diamond Caterer and caters events between writing. She eventually signed with True Glory, and put out several books and now has moved on. She is now signed with Mahogany Red Books, and finally feels at home. She is the Author of Demented Minds, Erotic Tales of Love, Lust, and Karma, Jamaica Mi Hungry and Killer Recipes by Kateri. She is due to release Shayla’s Revenge: Secrets of a Heroin Killer.