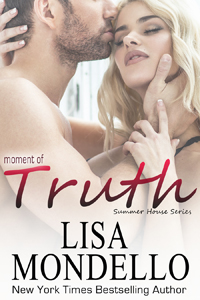 Book 2 in the Summer House series, MOMENT OF TRUTH, is now available!

Heather Connelly made that dreaded mistake most young girls in love made. She followed a boy to Nantucket, convinced he loved her. And then got dumped in a public and humiliating way that ended in a pub brawl. With her heart ripped to shreds, she wanders the beach drowning her tears in a bottle of wine, trying to figure out how to give it one more try. She finds the open door to his suite on the beach and climbs into bed naked wanting to show him just what he'll miss. Their love making is electric and nothing like she'd ever experience before. She's convinced she's won him back. But the next morning she wakes and realizes...she climbed into the wrong bed. Can this wrong man be perfectly right for her?