Please join me in welcoming author Eno Esquire to Conversations today! Eno is here to talk about his new book, Son of a Gun! So, check out the cover, blurb and excerpt below. And don't forget to check out his interview too, and get to know Eno Esquire! 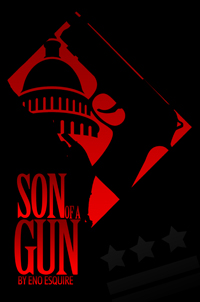 Son of a Gun

A young African hustler named Okon from Lagos Nigeria migrates to the United States in search of the American dream. When he arrives, he quickly finds out a dream can turn into a nightmare. Okon is disappointed in what he finds until he meets up with his cousin in Washington DC who is heavy in the game. Okon begins to cut out a corner of the heroin  business in washington dc for himself and in the process meets a women named Berreta,  who family was heavily respected in the streets and together they give birth to a son of a gun….

Excerpt from Son of a Gun

Knock! Knock! Knock!
“A Berreta somebody at the door.”
“You get it T, I’m fixing Justeen something to eat,” Berretta yelled.
“I'm on the toilet,” T shot back putting some base in his voice.
“Damn,” Berretta said to herself as she put the bacon on low and cleaned her hands on the apron. She opened the drawer beside  the stove and removed a chrome .25 and cocked it. She then placed her hand in the apron pocket still gripping the pistol as she walked to the door.
“Who is it?” Berretta asked looking through the peephole.
“Its Black,” the voice on the other side answered.
Berretta took the chain off the door and cracked it. “Whatchu need?” she stated coldly.
“You got some herb?” Black asked.
“Yea. How much you want?” Berretta asked looking behind him for a possible robbery attempt.
“Let me get to nickels...
Interview with Eno Esquire

What inspired you to write this book?

At the time I was locked up and did a lot of reading, it was a guy named show boat from North Carolina who had published a book from the feds so that pushed me to write one.

Is your novel fiction or nonfiction?

If someone was to ask I would definitely say fiction, but the characters are based off people I know or cross paths with in my life.

How was is it growing up in Washington DC?

It was cool gave me a unique experience on the world. I stayed in a housing project couple blocks from capitol hill.

You have a few Nigerian characters in your book, what's the connection?

My father is Nigerian.

How long did it take you to complete this novel?

What are your expectations for your first self published novel?

I really don’t have any expectations, just want to finish something I started.

Do you have anything you want people to know?

Yea I wrote this book for Author Cappers and the whole Surelere. 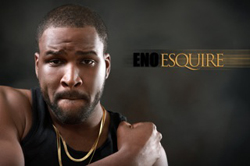 Eno Esquire is an author born and raised in Washington DC to a Nigerian father. His mother is of Greek and Native descent. When Eno was 17 he was convicted as an adult for a crime and sent to federal prison for several years. While in prison he wrote his first novel, Son of a Gun.