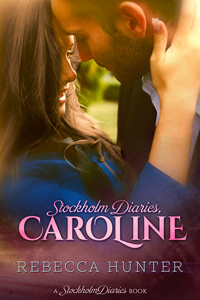 A pro hockey player with a rough reputation.
An American looking for a taste of adventure.
A chance to turn an intense attraction into something more.

Photographer Caroline Mendoza finally sheds her safe life in Michigan for adventure and a fresh start, and her first stop is Sweden. But Stockholm suddenly becomes more than just a casual stopover when Caroline discovers her reclusive next-door neighbor is ex-Red Wings player Niklas Almquist, whose high-profile alpha bad-boy image, both on and off the ice, has followed him back to Sweden.

While Niklas’s darker side draws her to him, she knows the sensible decision is to move on from Stockholm before she gets too attached. Her time in Stockholm is running out. She must choose between what is safe and what her heart tells her is right. Is she strong enough to take the risk?


Purchase STOCKHOLM DIARIES, CAROLINE for only 99¢!

The following excerpt takes place in Vasaparken in Stockholm, across the street from Caroline’s apartment:

Caroline looked around. She could see that she only had a few more minutes before the sun emerged, changing everything. She removed the lens cap and pointed the camera up through the magnolia tree branches in front of her, the pink and white blossoms soft against the deep morning sky.

Suddenly, her arms prickled with goose bumps. Someone was there. She hadn’t heard anyone approach, yet she could feel the presence of another person. Close. Too close. Caroline’s heart pounded in her ears as she lowered her camera and turned around.

Niklas. He was standing only a few feet away, close enough to make her heart jump, though she now wasn’t sure if this was due to the surprise of his sudden presence or to the way she had sized him up before she was even aware of what she was doing. He was dressed in a t-shirt and shorts that barely contained his sizable body, and it was now clear that a considerable portion of this body was made up of muscle. The cut over his eye had healed a little. Though his gaze was as impassive as ever, his cheeks were flushed, and his mouth was parted in what looked like surprise.

“What are you doing out here?” he asked softly.

“Exactly what it looks like,” she said. She sounded a little more curt than she had intended, so she softened her voice a little. “I’m photographing the trees in the park. I just didn’t realize you were so… so near.”

She could feel her face redden. His eyes bore into her as she said these last two words, and for a moment, his guarded look faltered.

“I meant what are you doing out here, alone again at 4:00 in the morning?”

“It’s when the light is best,” she said with a twinge of irritation. Why was she explaining herself to this man? Caroline put a hand on her hip and, with a hint of sass, added, “What are you doing out here?”

He ignored her question. “It’s not safe to be out here by yourself.”

Caroline raised her eyebrows, bristling at the implication that he, practically a stranger, was the authority on what was best for her. And he was implying that she wasn’t safe out here when he himself was, in fact, out here alone as well. After all the talk about pro-gender-equity men in Sweden, how had she managed to find a neighbor who hadn’t gotten the message? Caroline sighed.

“I have pepper spray,” she said, digging in her pocket until she pulled it out.

“Not sure that stuff is legal here,” he said, raising an eyebrow. “Besides, you weren’t ready to use it.”

“I would have been if there were real danger.”

She knew her answer sounded childish before the words even left her mouth, but she said it anyway. Much to her increasing irritation, he gave a dry laugh.

She looked at him hesitantly.

“You don’t want me to do that. It’ll burn your eyes. Badly.”

“That reasoning is why the pepper spray won’t help you,” he said, the amusement still on his face. He was goading her—she could feel it—but it was working. Her hand twitched around the canister.

“Fine,” she said and reached to pull the cap off the spray.

But before she even reached the cap, he grabbed both of her hands together with one of his. He used the other to turn her around and hold her against his solid chest. Her pepper spray dropped to the ground. Caroline gasped, her mind trying to process the sensation of her back against the warmth of his hard muscles. She stopped breathing. His large arm held her firmly against him, and she felt her heart frantically pounding inside her chest. She looked down at the scarred knuckles of the hand that was easily holding both of hers.

Before her mind had fully registered all these details, his grip softened. Gently, he turned her back around by her waist so she was facing him, but he didn’t release her right away. She wasn’t sure where to look. At the broad, solid chest only inches away? At the tense muscles of his arms? She drew in her first, shaky breath in too long. Caroline tilted her head up and found his eyes fixed on hers.

“It’s not safe to wander around alone at night, even if it’s light out,” he said softly.
Though he didn’t move, she had the sudden, inexplicable feeling that Niklas was about to kiss her. And Caroline found herself parting her lips in anticipation. But a moment later the feeling was gone, and she felt the warmth of his large hands disappear. Niklas picked up her pepper spray from the ground and placed it back in her hand. His fingers lingered on hers before he pulled them away and whispered, “It’s especially not safe if you’re not ready to use this.” 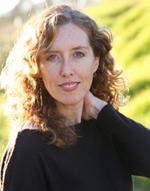 Rebecca Hunter writes stories about romance in new places. She is a writer, editor and translator who has always loved to read and travel. Though she earned a Bachelor's in English and a Master's in English Education, most of what she learned about writing romance has come from other sources.

Rebecca has, over the years, called many places home, including Michigan, where she grew up, New York City, San Francisco, and, of course, Stockholm, Sweden. After their most recent move from Sweden back to the San Francisco Bay Area, she and her husband assured each other they'll never move again. Well, probably not.