UNDER A TEXAS STAR by Lisa Mondello
https://books2read.com/u/4N1Wr9
Available 3/21/17! Read an excerpt below: 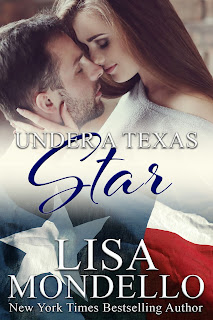 UNDER A TEXAS STAR by Lisa Mondello
Military hero Tom Garrison is an expert in high intensity emergency situations. But after years of military service, all he wants to do is hide from the world. When single mom Jenna Atkins bangs on his door in the middle of the night begging for his help for her sick young son, Tom can't ignore it. He flies Jenna and her son to an emergency center that can help the sick child, but can he just walk away? Despite his efforts, Jenna and Brian capture his heart—just as he captures theirs. Both Jenna and Tom have battled life's surprises and been touched by tragedy.. Can they overcome the past to open their hearts to love again?
Excerpt:
Reaching back and securing his hands at the nape of his neck, he watched as the millions of stars that had dotted the blue-black sky just a half hour ago blinked out one by one in the morning light.
He didn’t want to be alone for this moment, but it was more than that.
He wanted to be with Jenna. Climbing into his truck, he headed over to the Jenna’s. There was a light on downstairs in the den, which Tag hoped meant someone was awake at the Atkins farm. Jenna had said that she had a lot of sewing to catch up on. Maybe she’d gotten up early to get started before Brian woke up. With any luck, she’d be awake.
Anticipation rolled through him. Within seconds Jenna came bursting out of the front door onto the porch. Despite the porch’s shadows, he could see from the light filtering out from the den window that it was her. A smile immediately hit his face, but then he saw the panic in her eyes when she came down the porch steps.
His stomach clenched as the quiet peace he’d been feeling during the drive over shifted into concern. Had something happened? Was that really why she was up so early?
The truck ground to a halt in front of the house. Her bare feet were already crossing the yard as he turned off the engine and climbed out.
“What are you doing here so early?” she called out, watching him as he carefully closed the door without making too much noise. “Is there something wrong?”
Jenna’s hair was rumpled, and her eyes showed fatigue, as if she’d been up all night working after the exhausting day they’d had. But there was no fear or worry or distress written there. The troubled lines that normally creased her forehead were gone. It was clear she was glad to see him.
“I hardly slept at all last night. I tried, but I managed only a few hours,” he said.
“I slept a few hours, but I’ve been up since three o’clock. Brian and my father were so tuckered out last night that a bomb could have gone off in the yard and neither of them would have roused.”
He stared at her for a few moments, just taking her in completely.
Finally, she said, “Was there something you wanted to tell me?”
“Yes.”
Her shoulders slumped—just slightly, but enough for him to know she was bracing herself.
“I wanted to tell you that you’re beautiful. I just wanted you to know that.”
The smile she gave him transformed her whole face and made it impossible for Tag to breathe. She was beautiful, but he wondered how long it had been since she’d heard those words from someone.
“Thank you,” she said, touching her cheek with her hand. “Is that really what you came here to say?”
He gave her a crooked grin. “Yeah, pretty much. If you give me a few minutes, I can think of something else, too.”
Jenna chuckled as she slowly moved toward him. “Sometimes I forget...” Her expression was a mixture of nervousness and resolve.
“What’s that?”
Taking a deep breath, as if she was searching for courage, she looked away and then back at him again. Even in the darkness, her eyes sought him out and her beauty stole his breath away.
“I’m so many things to so many people. I get pulled in all kinds of directions. Dad needs me to help him out at the farm. My business needs my attention all the time and Brian... Not that I mind. I love my family.”
“But?”
“There are so many tasks in a day that need to be done that I forget that there is more to me than just a housekeeper, a business owner, a mother.”
“You’re a woman,” he said.
She nodded.
“I’m not likely to forget that, Jenna. Ever.”
“Then remind me.”
Download UNDER A TEXAS STAR by Lisa Mondello
https://books2read.com/u/4N1Wr9