Please join me in welcoming author J.A. Kazimer to Conversations today! J.A. is here to talk about her new novel, Cuffed! So be sure and check out the cover and blurb below. And don't forget to check out J.A.'s "story behind the story of Cuffed" too! 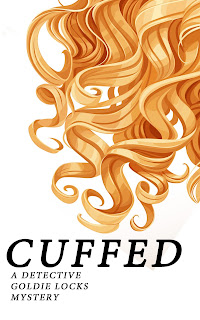 Detective Goldie Locks isn’t looking for just the right bed. Or any bed for that matter.

She’s on the hunt for a killer.

When she discovers the fingerprints of a once-upon-a-time lover, a man who jumped over a candlestick and out a window to leave her facing some serious trespassing trouble alone, at a crime scene, she vows to see him in handcuffs.

Jack B. Nimble has other ideas.

He threatens her adoptive family if Goldie doesn’t help him clear his villainous name, much to the chagrin of her current boyfriend and quite possibly the next mayor, Beau White, the fairest man in all the land.

Trying to prove his innocence turns out to be harder than she expected, especially when Jack refuses to aid in his defense, and instead, starts a campaign to ‘win’ her back. Goldie might be a blond, but she’s far from dumb enough to fall for his charms a second time.

Or so she tells herself every time his lips meet hers.

The deeper she plows into the rabbit hole and Jack’s soul, the more she learns about his motives for returning to the city—Destroying her perfectly crafted life.

The Story Behind the Story of CUFFED

When I considered what fairytale character(s)/story to reinvent for this novel (I’ve worked with most of them in previous novels, from an ugly stepsister with villainous tendencies to a gangster version of Little Miss Muffet), nothing felt just right.

They were either too big or too cold.

Even worse, some were just too soft.

Which, honestly, should have been my first clue, but I can be a tad slow.

So I put down my pen, and went mattress shopping. No kidding. I need a new mattress, not for my own sake, but for my 14 year-old Weimaraner. When he wakes up on the wrong side of a lumpy mattress there is hell to pay.

So I grabbed my purse and hit the mattress store. While perusing the aisles, trying out this mattress and that, it hit me. Like most people, I learned about the joy of finding the perfect mattress from the story of Goldie Locks.

And there it was. My next victim(s) – Goldie Locks and the three bears.

So in CUFFED, Goldie Locks is all grown up and now a cop in the contemporary fable city of New Never City. Gone are her golden locks, replaced with a much more subdued blind-mousey brown #42, as well as her impulsiveness that resulted in trespassing charges so many years ago.

From there, the plot was easy. Take a pinch of an old lover who once betrayed her, by, of course, jumping over a candlestick and vanishing out of her life, a boyfriend considered the fairest man in all the land, and a bag of missing magic beans (taken from a murdered giant, who may or may not have been jolly) and the story came together.

I hope the new tale is just right for you. 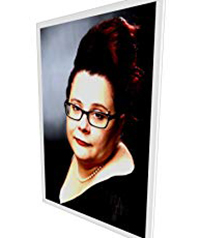 J.A. (Julie) Kazimer lives in Denver, CO. When she isn’t looking for a place to hide the bodies, she spends her time with a pup named Killer. Other hobbies include murdering houseplants and avoiding housework. She spent a few years as a bartender and then wasted another few years stalking people while working as a private investigator before transitioning to the moniker of WRITER and penning over 15 titles.