Teaser Tuesday: All I Want for Christmas is You 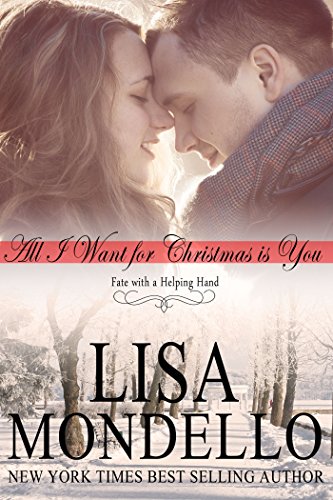 Santa Claus is going to have a rough season... Lauren Alexander is raising her daughter alone. Abandoned by her family for her decision to keep her daughter Kristen, she has done a pretty good job for the last six years. Or she thought she had. That's why she is crushed when little Kristen gives up her wish for a toy or goodie and instead asks Santa for a present for her mother. She wants Santa to bring a Daddy. Delivering Daddies isn't Santa's bag.

But this Santa has a plan...

Kyle Preston knows what it is like to be abandoned too. Luckily he found the support of loving adoptive parents and has turned himself into one of the most successful Real Estate developers in town.

Building a house is easy. Building someone's trust is a whole other story. But with a little helping hand, a little Christmas magic can make all the difference in the world.

Purchase ALL I WANT FOR CHRISTMAS IS YOU now!


"Come on, Mommy!" Kristen Alexander said, tugging at her mother's sleeve.  "There's no one in line this time."
"Wait a minute, honey.  Let me tie your shoelace."  Lauren Alexander squatted down and blew out a quick breath as she made a bow in the Technicolor laces of her six year old daughter's sneakers.  Kristen was as hard as ever to keep up with these days.
The shopping mall had been crowded all evening, filled with holiday shoppers carefully selecting their Christmas gifts.  Scanning the area, she now saw only a handful of scattered shoppers left, carefully gripping their bundles.  With less than three weeks left until Christmas, Lauren had hoped to be farther along with her Christmas shopping.  This latest trip to the toy stores, meant as a fishing expedition to find out just what would catch Kristen's eye, had produced nothing but unrest.  She'd hoped to make this a special year for Kristen.  So far, it wasn't turning out to be what she'd planned.  There was no way she would be able to afford the kind of Christmas she'd hoped to have.
"Mommy!" Kristen squealed, "I don't want to miss Santa Claus!"
"Okay, give me a kiss," Lauren requested, reaching out to give her a brief hug.  Smiling, Kristen quickly obliged.  "Do you want me to go with you, baby?"
"No-o-o-o!" Kristen said, rolling her eyes at her mother.
"I know you're a big girl now, but I had to ask.  I'll be standing right at the end of the ramp, okay?" Lauren assured her, feeling a tug at her heart.  Her little girl was so grown up at six years old.  Time was flying by so fast.  She only wished she had more time to spend with Kristen to watch her grow.
Kristen trotted up the ramp a few feet and stopped short, abruptly turning and racing back.  "My letter for Santa!  Mrs. Hopkins helped me with it.  I forgot it at home!" she cried with all the panic of a little girl who'd just lost her kitten.
"No, Krissy, I have it.  Mrs. Hopkins gave it to me when I picked you up after work.  Remember?"  Lauren pulled the sealed envelope marked "North Pole" out of her purse and handed it to Kristen.  "Go on.  The mall is going to be closing soon."
Kristen's exasperated expression was replaced with a chubby faced smile as she clutched the letter to Santa in her little hand and bolted up the ramp.
Thank the heavens above for Mrs. Hopkins, Lauren thought.  If she didn't watch Kristen before and after school every day, she couldn't have taken that job at Woodlawn Industries as a customer service representative.  She'd still be waitressing and paying baby-sitters top money just to make ends meet.  At least now, she had a chance to make something for herself and Kristen.  The Woodlawn position offered her the chance for advancement and training she never would have gotten if she'd remained at the restaurant she'd worked at since leaving home.
She watched Kristen race to meet Santa, determined to tell her Christmas wish.  She sighed, feeling her heart fall.  If only she had the money to give her all the things she wanted.
* * *

Kyle Preston watched as a little blue eyed cherub of a girl, no more than a first grader, came racing up the ramp toward him.  It was as hot as a burning August day in this Santa Claus suit.  He'd been wearing it for the last three hours and was soaked skin deep from his boots to his white beard.  He needed a shower and a good meal.  To say that he was tired was the understatement of the century, but seeing the delightful sparkle of a child at Christmas was worth all the hassle and discomfort of playing Santa Claus.
"Ho!  Ho!  Ho!" he called out as the little girl came bustling toward him.  Extending his hands in front of him, he gently lifted her into his lap.  "And what's your name, little one?" he asked in his disguised Santa Claus voice.
The little girl looked up at him with wide saucer eyes and murmured softly, "Kristen.  But my mommy calls me Krissy."
"That's such a pretty name for a pretty little girl.  Have you been a good girl for your mommy this year, Kristen?"
"Yep.Sometimes I don't pick up my toys before bed though.  Am I gonna git in trouble with you for that?"  She didn't look at him.  Instead, she stared off down the ramp where a woman in a bulky blue coat stood waiting.  Seeing no one else in the vicinity, Kyle presumed it to be her mother.

"Is it all the time, or do you just forget once in a while?" he asked with Santa Claus authority.

"I thought you were 'spose to know those things?  Mommy always says you can see me when I don't listen."  She looked up at him wide-eyed and innocent.
He chuckled, despite himself, in his normal tone.  Then remembering his part, he altered his voice and ho-ho'd a laugh that made Kristen giggle.  "Well, Kristen, it's too big a job to look at all the kids all over the world.  So I have to ask for a little help every now and then.  You don't mind that, do you?"  He posed the question not expecting a reply, but to his surprise, Kristen looked up at him thoughtfully, contemplating her answer.
"I don't mind.  Mommy needs help sometimes, too," she said as innocently as an angel.
He was too much of a sap for this job, he decided.  Maybe it was his nature or maybe it was growing up in an ever expanding family, but he had a soft spot for this little girl.  She was cute as a button with her baby fine blond curls framing her face.  Looking down the ramp, he decided her mother wasn't half bad herself.  She appeared a bit tired, but pretty in a simple girl-next-door kind of way.  Her flowing ash blond hair fell both to the front and back of her knee length coat.  Even from the distance they were at, he recognized that mother and daughter bore a strong resemblance and had the same saucer shaped eyes.
Kyle turned his attention back to the pressing matter at hand and asked, "So, what do you want for Christmas this year?"
Kristen's little face brightened even more, if that was at all possible, and she stuck out the envelope she'd been crumbling nervously in her hand.  "Here.  I wrote it down so you won't forget."
"Well, I'm impressed.  You did this all by yourself?"
"Mrs. Hopkins helped me."
He took the envelope and, after breaking the seal, plucked out the note.  "Is Mrs. Hopkins your teacher?"
"Nope."  She shook her head back and forth with exaggerated motion.  "She's my baby-sitter.  We live on the top floor of her house.  She plays Barbies with me when Mommy can't cuz she has to work."
"Well, let's see what toys we have here on your list."  Kyle opened the note and began to read the "Dear Santa" aloud, but stopped as soon as he began.


Dear Santa,
Plez send me a daddy for Christmas so Mommy doesn't have to work so much.
Luv, Krissy Alexander


Lauren turned the key in the ignition for the second time and said a silent prayer that the car's engine would turn over.

Purchase ALL I WANT FOR CHRISTMAS IS YOU now!