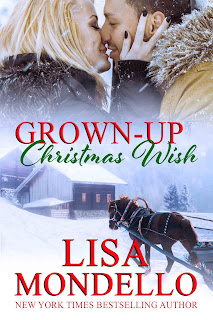 On the eve of losing his inheritance from the only person who called him family, Cade takes leave from the Army and travels to Sweet Montana only to find out his grandfather's house is going to be put up for auction for hungry developers to bid on if he doesn't come up with enough money to pay off delinquent tax debt before the day after Christmas. The only warm childhood memories Cade has were from visiting Sweet during Christmas and helping his grandfather give sleigh rides down Main Street. So Cade decides to fix up the old sleigh to see if he can raise enough money to keep his house. If he fails, he has no reason to come back to Sweet except for the pretty realtor who is has a knack for wearing the absolute wrong winter boots, makes the best hot chocolate, and has the warmest smile that melts his heart.

Real estate broker, Sally Macomber hates the holidays as much as she hates the cold weather. She'd moved to Sweet just before he husband decided to enlist in the military. She stayed too long after his death because moving on was harder than dealing with the harsh Montana winters alone. She'd thought the old rundown property across the street from her real estate office was going to be an easy deal that would finally help her move on with her life. She never counted on the persistent soldier with blue eyes she couldn't help falling into and with a persistence that made her want to fight for a Christmas miracle she never knew she was hungry for. Grown-ups don't write Christmas lists to Santa. But as her heart falls for Cade, Sally begins to wonder if maybe her grownup Christmas wish was Cade all along.

Will Cade be the comeback kid who brings Christmas joy to Sweet and to Sally?

Free to Kindle Unlimited Subscribers
Excerpt
He got up from the chair and stood next to her. He wanted to touch her. He didn’t know why. But something pulled at him to reach up and touch her cheek with the back of his hand, his fingers. He wanted to feel her silky hair. He didn’t need to touch it to know it was soft. Just the thought of it made him lightheaded.

She peered up at him and as she did, he saw a heavy sheen over her eyes. “I’ve stayed in Sweet too long. I couldn’t leave after Mark died. It was as if I was frozen in time here for so long. I’ve been approached by a developer to buy my house and the barn. They plan to level the house and the barn too.”

“That barn? They want to get rid of it?”

“As small as my property is, it’s on Main Street. And if they get their hands on your grandfather’s spread, that makes my property more valuable. If I sell the house and get a commission on the sale of your grandfather’s property, which as of right now is set to sell at auction for more than four times the current value of the property, I can afford to leave here and take time to start over back East. Kara and Joel, my sister and brother, have been after me non-stop about it since I told them about the auction.”

“So you really do have a good reason for wanting me to fail.”

She chuckled softly and placed her hands on her cheeks for a brief moment. “I don’t want you to fail. I just don’t see how we can both win in this situation.”

He placed both hands on her shoulders, so she was standing in front of him. “Standing in your kitchen in front of you, wanting to kiss you.”

“Is that what you really want?”

“Oh, yeah,” he said in what sounded like a guttural growl.

She lifted her face as if inviting him to brush his lips against hers and fulfill the fantasy he’d been thinking about all through dinner. Just his hands on her shoulders had his body humming with desire and wanting more. Their mouths were so close he could feel the heat of her breath.
But then she turned away, leaving him confused.