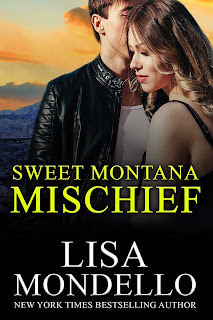 A new tenant lives at the Lone Creek Ranch that has Ace Hanson's head spinning. He'd always thought of himself as a drifter, but the thought of moving around like a gypsy suddenly didn't sound as appealing as the lovely Hope Cabello.

As an entertainer at the Red Wolf Casino, Hope was used to short-term gigs and moving around from one casino to another. Living in the moment was important since she never knew when her last would be. But could the devastatingly handsome EMT with a warm heart and a healing hand heal this gypsy girl's heart and make her believe they could grow old together?

She was a tall woman. Not overly tall but certainly tall enough, with her long legs being quite an attractive feature. He couldn’t see an inch of skin on her, but the way her snowsuit hugged her as she lifted her leg with ease made him take notice.

Irritation crept up his spine, forcing him to glance away towards the ranch. He couldn’t imagine which ranchhand would’ve given an inexperienced person this horse and allowed her to go off on her own. Ace had gone riding on the ranch and knew it was big and easy to get lost on when you didn’t know your way. There was a blanket of white snow on the ground, making it hard to see the trails Trip had spent well over a decade cutting through the woods. All those trails lead back to the ranch so no one could get lost. Even so, it was hard to imagine how she had ended up here by herself without Trip or one of the ranch hands knowing.

But as the woman lifted herself into the saddle with more grace than he had expected given the predicament she’d landed in on the snowbank, he understood how a new ranch hand may have fallen for her false bravado.

"Thanks for your help," she said, taking the reins from him as she leaned forward. "I can take it from here."

"Easy-going. I don’t want to have to rescue you again if you fall out of the saddle."

"Is that what you think you did?"

His smile was slow as the irritation gradually slipped away. His lips stretched so wide that his smile threatened to crack his chapped lips wide open. Now that the sun was fully up and she was glaring down at him, he noticed how pretty she was. She wasn’t from around Sweet, that was for sure. Probably not even Montana. Now that she was seated in the saddle and her legs were at eye level, he had a clear view of the fact she wasn’t wearing proper riding boots. Her cream-colored ski jacket was brand new, as if she’d pulled the tag off it this morning. She was at least wearing those pink mittens and a ski hat, but the mittens were a size too big for her tiny hands.

"Call it what you like," he finally said. "I won’t tell anyone what happened. As long as I can see you ride okay down to the ranch gate and head down the driveway."

She pursed her lips as if she wasn’t happy with his concern and thought of it more as criticism than a warning for her safety. Then she glanced down the road as if realizing for the first time where she was. He felt no better.

He couldn’t help but smile again. This time he felt the split in his lip and the sting of cold air against the uncovered skin. "You sound like you’re trying to convince yourself rather than me."

"I’m Hope Cabello. Is there anything that goes with Ace?"

"The only reason it would matter is if you tell someone about what just happened this morning…or you plan to see me again."

Hope’s lips lifted a delicious grin. He was playing with her. She knew it, and what was more enticing was that she liked it. A little mischief. "That won’t be necessary, Mr. Ace."

She frowned, catching her balance as the horse clopped his hooves on the ground, clearly tired of staying in one spot in the cold.

Her gaze drifted to the ranch as she thought. "Trip’s girlfriend?"

"Fiance. But if you mention the name Ace around here, most people know you’re talking about me. Small town. Not a very popular name. And most people don’t want to call on me unless there is a hockey game planned or barbeque in the summer. It’s a little EMT joke."

"I’ll try to remember that." She bit her bottom lip, nibbled a bit as if she was playing with a piece of skin that was chapped, then stopped as if she thought better of it. Chapped lips were a winter hazard around here. The local stores sold as much lip balm as they did huckleberry jam.

"You’d better get back to the ranch, or Trip will send a search party out for you. If he hasn’t already."

Without saying anymore, she gave a simple nod and then kicked the horse’s side, and Gingersnap began to walk on the road toward the ranch. Ace waited on the road and watched, glancing back down the opposite direction. It was probably safer being on the soft snow instead of the road where the horse may get spooked by a fast-moving truck. If she fell off the horse, well, then at least she’d land in a pile of snow again rather than on a cold hard surface. But the gate to the Lone Creek Ranch was just a few hundred feet away. He’d watch her for a bit and make sure she didn’t have any trouble.

When Hope and Gingersnap disappeared down the driveway, he walked back to his truck,  amazed at how much he’d enjoyed watching her.