On Conversations: Soul of the Dragon by #Author Natalie Damschroder #IRInk #authorRT

It is my great pleasure to have author Natalie Damschroder on Conversations today!  I have been waiting for the release of her latest book, Soul of the Dragon, book one of the Soul Series, for a very long time.  I'm so thrilled that it is finally released!  So sit back with a cup of coffee and enjoy!  Lisa

The Dragon of My Heart

About 14 years ago, when I'd been writing for a very short time and just getting into the rhythm of being a writer with a toddler and a full-time job, I was watching a cartoon with my daughter, who was about 3 at the time. It was some Japanese anime with a dragon in it, and I said to Number One, idly, "Do you want to see a dragon someday?" I was curious how she'd react.

She very firmly and decisively said, "Yes. A red one."

Inspiration flash! I dumped her on the carpet, dashed for a pen and a scrap of paper, and scribbled down the first two lines of Soul of the Dragon.

Fast forward about two years. Yeah. I wasn't ready to write a paranormal single title romance, especially since I had no idea why Alexa Ranger would meet a dragon. But one day, after we'd moved into a new house, Number Two had been born, and our basement flooded because the previous owners had left the outside faucet open and caused a freeze break that killed the carpet in my office and caused me to have to move EVERYTHING out of it... I sat down in the corner of the basement, at a makeshift table with all my office stuff piled around me, and wrote 16 pages in a rush. It felt so good.

And then I set it aside for about two years.

When I finally finished the book, about six years after I'd started it, I went back to the beginning...and found none of the details fit. LOL There have been several revisions since then, mostly changes in the inciting incident, updates to technology and society, and so on. The romance unfolds a bit unconventionally, which made publishers wary. But it remained the proverbial book of my heart and spawned a whole series of unconventional heroes and heroines, fighting against injustice and for their soul-mates. The world of fiction now makes it possible for unconventional books to find their audiences, so I'm very happy to bring it to you now. I look forward to hearing reader reaction! 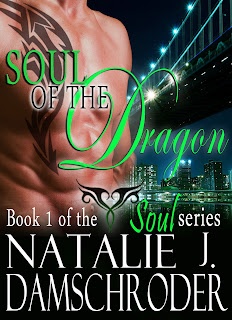 A thousand years ago, a jealous mage cursed a young lord into dragon form to keep him from his soulmate, a peasant girl coveted by the mage. They have three lifetimes to break the curse.

Twice they have failed.

Alexa Ranger doesn’t remember the lord’s son who was her soulmate three lifetimes ago, nor does she recall their previous attempts to break the curse—each one ending in her death. But she does remember Cyrgyn, the golden dragon who has haunted her dreams since childhood and has appeared to her now to begin their final attempt.

A highly trained spy, Alexa has been preparing for this mission her entire life. But her skills are no match for the desperate mage who has lost none of his command of magic—and none of his twisted, possessive need for her. She is determined to save the dragon she has come to love, but there is more than the curse standing in their way…


Natalie J. Damschroder grew up in Massachusetts, and loves the New England Patriots more than anything. (Except her family. And writing and reading. And popcorn.) When she's not writing romantic adventure for Carina Press and paranormal romance for Entangled Publishing, she does freelance editing and works part time as a chiropractic assistant. She and her husband have two daughters they've dubbed "the anti-teenagers," one of whom is also a novelist. (The other one prefers math. Smart kid. Practical.) You can learn more about her and her books at www.nataliedamschroder.com.

Order Soul of the Dragon by Natalie Damschroder

AMAZON  I  Barnes and Noble  I  Smashwords