On Conversations: #author Cheryl B. Dale

The Warwicks drift in and out of their mountaintop mansion like wraiths. People whisper they’re different. Maybe witches. Cross them and your children sicken, your garden withers, your dog dies.

Then Lindy rescues Gareth Warwick from drowning. And ends up loaning out her soul.

Almost eighteen, Lindy hears Voices from distressed animals that others don't. But she isn't crazy. She's a clairaudient.

After fleeing her stepfather's abuse, she lives with her grandmother at the bottom of Slumber Mountain owned by the mysterious Warwick clan.

Lindy avoids them until one night her Voice leads her to save Gareth from the lake. When she takes him home, his aunt plies her with tea that brings weird dreams. Then his aunt proposes a trade: Lindy will receive fame and fortune in return for loaning her soul to the Warwicks. They need her clairaudient ability to communicate with the mountain.

It’s wrong to give away her soul, but Lindy wants desperately to be like other people, untainted by her past. Maybe if she’s successful, someone like Gareth can love her.


EXCERPT (after Lindy rescues Gareth and brings him to the mountaintop mansion):

Too late now. Consigning my bad vibes to purgatory, I drove the pickup into a well-lighted garage hewn out of solid rock. Several cars were already parked there, and he had me pull up beside a large Mercedes. When I cut off the engine, an eerie quiet descended.
Trying to vanquish claustrophobia, I briskly opened the door. “Can you get out okay?”
He could and did. He was also able to lope without staggering to the elevator.
So he couldn’t be as drunk as he pretended even if he did still smell of some potent brew.
Since I didn’t have to get too close, it didn’t matter. I would see him inside and leave.
On the elevator, the lights faded unexpectedly. From his corner, Gareth picked up on my panic.    “Not as tough as you make out, are you?”
“I’m tough enough to deal with you.”
His mouth twitched. “The lights dim automatically so you can look out at night. Behind you. See?  Most people like the view.”
I turned. The back of the elevator was glass, revealing the driveway’s last turn among the trees. On one side, the town twinkled in the distance like fairy lights while on the other, moonlight reflected off the black lake far below.
Pretty view but not reassuring. My heart pounded as we inched upward. By the time we emerged into a massive hotel-like lobby, I was ready to turn tail.
The scent of roses blasted us, not unpleasant but strong. From a porcelain vase on a low table in the middle of the spacious room, two dozen or more oversize roses fanned out to spread their heavy perfume. I’d seen red roses before, but never ones like these. They looked as unreal as they smelled, with huge petals perfect ovals and bright blood-red. They could have been conjured up from some magical greenhouse, but they suited the surroundings.
Goose bumps rose.
“Come on,” Gareth urged. “Right over here.”
My unwilling feet lagged after him toward a fireplace at one end, tall enough to hold an upright man and wide enough to hold four or five men standing shoulder to shoulder. A pair of wing chairs faced it. A small fire blazed though it was September, and Georgia Septembers are seldom cold.
“Why in the world do you need a fire this time of—?”
“Yeeeeeeechhhh!”
A form, wild and shaggy and screeching, erupted from its hiding place beneath a bombé chest.
It shot toward us.
I jumped back. “Ohhh!”
A flowing apparition rose from one of the chairs behind the squealing creature. A human scream pierced the air over the cat’s cries.
I bolted. Smack into Gareth’s shoulder.
He, giving his strangled laugh, caught me. His arms closed around me cautiously until he held me fast.
“Let me go!” The darkness and the mountain that had unnerved me on the way up were nothing compared to the attacking beast and the banshee behind it.
“It’s all right.” Gareth’s grip tightened. “Auntie El, it’s me,” he called over my head. He gave me a reassuring shake and murmured, “Come on, Lindy. It’s only Grandmama’s cat scaring my aunt. He loves picking on Auntie El and Auntie El can’t learn that screaming just makes him worse.”
I barely understood him. His hold did not lessen as I struggled.
He was warm and solid, and I stopped fighting him.
The punch on his breath mingled with remnants of spice aftershave and clear lake water.
Forgetting humiliation, I slumped against his chest as his words sank in. His hand might have caressed my hair, but the sensation was so feathery-light that perhaps I imagined it.
My own sob yanked me back to reality.
I never cried. And Gareth Warwick mustn’t think I needed him for any reason whatsoever.
I straightened and pushed him away.
For a fraction of a second, his arm remained outstretched as if to embrace me again.
Another step back quelled the temptation to let him.
The cat, a huge white beast with powder-puff fur, wound about Gareth’s foot, its previous wild screams muted to a loud purr. Its candid gaze seemed to say, “Why no, don’t blame me. That had to be some other cat howling at you just now. I’m much too nice a cat to do anything like that. See how well-behaved I am?”
“Gareth, stop that beast’s mewling and make him go away,” the apparition commanded.
Gareth spoke to her with the same calm he’d used to quiet me. “All right, Auntie El. He’s leaving. There was no need to scream like that. You’ve scared Lindy.”
Lindy. I hadn’t told him who I was. I wasn’t about to remind him of that long ago summer.
“I’m not scared and I didn’t tell you my name.” I put more distance between us.


Find The Warwicks of Slumber Mountain on Amazon, Barnes and Noble, MuseItUp, and Smashwords. 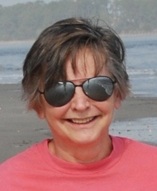 Cheryl B. Dale’s first published book, a Harlequin/Silhouette romantic suspense, was made into a TV movie. An updated and revised edition is now available for eReaders. Since then she’s published a hardback light mystery and several eBooks including three romantic mysteries, and this gothic with paranormal elements.

Reading is her only hobby. A lazy disposition means she doesn’t enjoy cooking, cleaning, gardening, or anything else that takes much effort.

Her guy and two cats share her space. One cat watches television with the guy. The other reads with her. www.cherylbdale.com
cherylbdale.blogspot.com