Love ‘em or hate ‘em, reality shows are on just about every network. I’ll admit there are some that I can’t get enough of and there are others that leave me scratching my head…Honey Boo Boo anyone?

I’m not about to bash reality shows. How can I when I’ve just launched the first book of my Reality TV Romance series? Reality shows have given me inspiration. Let’s face it. The majority of these shows are likely scripted. The producers know how to gain ratings. The “reality stars” know that appearing on these shows could potentially launch their careers. Yes, I realize I’m generalizing, but…anyone remember Heidi Montag and Spencer Pratt?

I came up with the reality show Pick Me while I was writing Kiss Me, a sexy love story about a woman in search of a “friend with benefits.” I loved the concept of Pick Me so much, that I had to

write a book involving the show.

To help save the TV reality show, Pick Me, from cancellation, Valentina Bonasera swaps her position as the show’s Production Assistant, to play the role of Bachelorette, only to discover Bachelor Number One, rancher and sports agent, Colt Walker, happens to be her one and only one-night-stand she’d snuck away from six months ago.

Colt had never forgotten the hot, sensual night he’d shared with Valentina, or how she’d left him without so much as a note or her contact information. He’d spent months searching for the woman who’d given him a night he couldn’t forget and thought he’d never see again. Now that she’s in Dallas, he’s determined to make her his…

Here’s a short excerpt from the opening scene of Pick Me:

Colt’s entire body went slack. Thank God this was almost over. One more question, one more half-assed answer and he could quit for a bit. His ranch was calling him, and with the answers he’d given the so-called lovely bachelorette, he doubted she’d pick him for her first date. If everything worked to plan, he’d have at least a few days reprieve before he had to face the cameras again.
“Okay,” she said. “Let’s start with Bachelor Number Three. What is your ideal first date?”
“Um, I’d take you to a nice restaurant. Maybe find a local fair or carnival. We could walk around and stuff.”
Conscious of the cameras, Colt carefully shifted his gaze to Brad. Was this guy for real? Maybe the muscle-bound vegan was trying as desperately as he was to avoid being the first date. With his golden, pretty boy looks, and all of those muscles on top of muscles, Colt bet Brad auditioned for the show hoping to break into acting or modeling, not for love.
The bachelorette cleared her throat. “O-okay. And you, Bachelor Number Two?”
Trent tossed his long, poker-straight hair over his shoulder. He waved his hands, and the tattoos lining his arms became a blur of black, red and blue. “Dinner, then we’d hit the clubs, where we’d rock all night. Pa-pow,” he finished and did a quick encore to his earlier air drum set.
Good Lord, where did they find these guys? The only reason he’d ended up on the show was because he’d lost a bet, and Macavey’s niece worked in the casting department. Pick Me’s casting people must have chosen Trent and Brad for some sort of shock factor. Trying to pair either a wannabe rocker or a muscle bound blockhead with this woman just seemed wrong. On so many levels. Then again, the bachelorette was probably a former beauty queen using the show to enhance her career, so what did he care?
“Wow,” she said with another raspy chuckle, and Colt had to admit, he liked the sexy, teasing quality of her voice that held a hint of a Midwestern accent. “Ah, let’s move on to Bachelor Number One. What is your ideal first date?”
Excitement pumped through his veins. Now he had the opportunity to free himself from the show’s nonsense for at least a few days. But he would have to lay it on thick. Otherwise he’d end up stuck in Dallas longer than he wanted.
“Welp,” he purposefully drawled, hoping the tone would add to the backcountry hick persona he’d decided to go for. “I’m really into huntin’, and just bought myself a varmint rifle I’ve been itchin’ to try out on the coyotes terrorizin’ my fillies. So I was thinkin’ you and me could head out and do some shootin’.” He thought about adding that he’d bring a picnic basket filled with beer and beef jerky, but that seemed a bit over the top. “If we bag one of those critters, I’ll even have Ol’ Red, the local taxidermist, do his magic and you’ll have yourself a work of art you can display in your livin’ room.”
The silence that ensued made him want to burst out laughing. Especially when he pictured the director splicing in sound bites of chirping crickets. Yeah, after that answer there was no way she’d pick him for the first date. Hell, there was no way she’d pick him period.
After a pause long enough they could have taken a commercial break if the show was live, she cleared her throat. “Really? A varmint riffle? I’ve never shot one of those. Did you go with a twenty two caliber or a twenty five?”
“Twenty two.”
“A Hornet or a Remington?”
“Remington.”
“With a tri-muzzle break?”
The woman actually knew about guns? He shook his head. You’ve got to be kidding me. He’d thought bringing on the good ol’ boy, gun toting talk would have been a surefire way of keeping her from picking him. But it appeared his plan was about to literally backfire on him.
“Yeah, it has a tri-muzzle break.”
“Hmm. Interesting. I shoot left, is that a problem?”
“N-no,” he stumbled over the word when he caught the bald headed director waving his arms in the air.
The music kicked up, and Shepp broke in, silencing anything else he had to say about the rifle.
“Okay, Val,” Shepp began with unnecessary drama. “You’ve asked questions, received answers...now, it’s time for you to decide which one of these bachelors will receive the coveted first date.”
“You mean right this second?” she asked, and the audience laughed. Colt couldn’t help cracking a smile, too. She sounded as if she didn’t want to make a choice at all. He almost felt sorry for her. She had her pick of a tattooed wannabe rocker, a blockhead Neanderthal, and a gun toting hillbilly. Oh well, he thought, that’s just the price she’d have to pay for her fifteen minutes of fame.
“Val, I need an answer,” Shepp said as if this were a life or death situation. “Who will you choose?”
The studio darkened, then spotlights shifted over the stage. “Will it be Bachelor Number One?” Colt squinted when the beam hit him square in the face. “Or Bachelor Number Two.” The light focused on the rocker, Trent, then zipped to Brad. “Or Bachelor Number Three?”
Music infiltrated the studio as the lights flitted back and forth, to him, to the other bachelors. All the while, he kept thinking...don’t pick me. 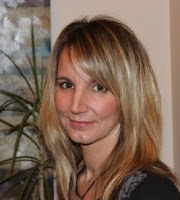 I didn’t pick up my first romance novel until I was in my late twenties. Immediately hooked, I read a bazillion books before deciding to write one of my own. After the birth of my first son I needed something to keep my mind from turning to mush, and Sesame Street wasn’t cutting it. While that first book will never see the light of day, something good had come from writing it. I realized my passion, and had found a career that I love.

When I’m not writing contemporary romances and dark, romantic suspense novels (or reading them!) I’m chasing after my four kids and two neurotic dogs.

You can email me at authorkristinemason@gmail.com or find me on Facebook!