I’m always fascinated with kickass heroines, especially those with excellent defense skills and the determination to use them. I myself have a Texas Concealed Carry license and practice frequently with my weapon. I was at the gun range one day, cleaning up my spent cartridges, when the idea of a female sharpshooter came to me.
What if she was former law enforcement? And add former military to that. Tough as nails but still feminine and sexy. At a point in her life when she had an indecisive picture of her future and a badly wounded heart.
And here comes the man-in-jeopardy, sexy, smart, running for his life and hiding away in her tiny corner of Texas. Would she protect him? Defend him?
The idea for Collision Course was born. The gun range where Casey practices looks exactly like the one I use, and the scenery as she heads back to her little town is what I see on the way back to my little town. Connelly, Texas is a carbon of the little Texas town where I live and the Half and Half a takeoff on the place where people in my town gather to eat, drink exotic coffees and tap into WiFi.
So, you ask, am I Casey? I sure would like to be. 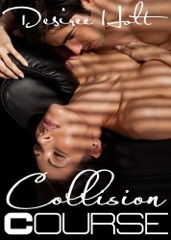 He's discovered that his boss, international businessman Charles Bennett, is actually dealing in drugs and illegal arms. Killers are on his trail and Tate Buchanan needs a place to hide and use his hacking skills to get the evidence he needs. He finds it in tiny Connelly, Texas, where he also finds hotter than hot Casey McIntyre. After six years with the F.B.I. and four years in Afghanistan marked by a disastrous love affair, Casey is trying to put both her life and her shattered heart back together. Her instincts tell her that the stranger in the family restaurant has trouble on his back but her common sense tells her to stay as far away from him as possible. Of course, common sense never paid attention to combustible chemistry and it's not long before Casey and T.J. (as he now calls himself) are spending every minute together day and night. Can he find the proof he needs before the killers track him down? And when they do, can Casey use all her skills to protect him and keep him safe?

A man-in-jeopardy story for a change, where a kickass woman uses all her skills to protect the man she's come to love.

Crack! Crack! Crack!
Casey McIntyre fired the last three bullets in her Glock 17G thirteen-round clip, hitting dead in the middle. No center mass for her. All her shots went straight to the head of the silhouette with one hundred percent accuracy. She nodded her head in satisfaction.
Since she’d left the service and come home, she started most of her days the same way. She tried to tell herself it was to keep her skills sharp but in reality, anger drove her. She still had so much of it stored up inside her, along with a world of hurt.
She trudged to the backstop, nailed up another target and took a black Magic Marker from her jeans pocket. In big letters she wrote a P and an M on the head, making them as bold as possible. At the shooting table again, she reloaded her Glock and checked to verify her H&K P30 had a full clip. The two guns were her personal weapons, much like the ones she’d been issued when she’d been attached to the Special Ops unit in Afghanistan.
She adjusted her ball cap, yanking at the ponytail poking out through the opening in back. Putting on her ear protectors and safety glasses, she picked up the Glock and sighted.
Bam!
Again the first shot drilled a hole in the center of the head.
Die, Paul Marsden. You asshole. Rat bastard. User.
The next three shots, in rapid succession, stitched a straight line down the torso. With defiant satisfaction, she emptied the rest of the clip into the genital area, blowing a nice round hole in his package. The act gave her the first real sense of wiping away the past and taking control of her life since she’d come home. She had to suppress an urge to lift the gun and blow on the barrel the way old-time gunfighters did.
Reloading the clip, she fired again. By the time she’d finished, she’d gone through two more and the silhouette hung in shreds and tatters. Wiping her hands on her jeans, she tore the target down and replaced it with another. Again she marked it with initial­s—A.A.S.—and drew a circle around them with a vicious stroke. Then she picked up the Heckler & Koch, settling the familiar grip into the palm of her hand.
This time when she sighted, she aimed for center mass and unloaded the entire clip without pausing between shots. Reloading with rapid speed, she fired in the same pattern, over and over again, until she’d used all the .45mm ammo and left a hole in the silhouette big enough to drive a small car through. By then her arms were quivering, her body covered with sweat. Sitting on the bench at the loading table she forced herself to slow her breathing and her racing pulse before policing her brass and packing away her gear.
Shooting the ghost of her former lover had been cathartic but not half as satisfying as destroying the target marked A.S.S.—Col. Aaron Sherman Smart.
Good initials for him. They suited bastard that he turned out to be. A sanctimonious son of a bitch.

Collision Course is available for ONLY 99 Cents. Get it HERE!

Desiree Holt has lived a life of excitement that brings the color to her writing. She spent several years in the music business representing every kind of artist from country singer to heavy metal rock bands. For several years she also ran her own public relations agency handling any client that interested her. She is twice a finalist for an EPIC E-Book Award, a nominee for a Romantic Times Reviewers Choice Award, winner of the first 5 Heart Sweetheart of the Year Award at The Romance Studio, and is published by four different houses. Romance Junkies said of her work: "Desiree Holt is the most amazing erotica author of our time and each story is more fulfilling then the last."

When she's not writing she's traveling Texas and, in season, obsessively watching football.

Come on out and play!