This week I am at the Romance Writers of America annual conference in Atlanta, GA.  As a treat, I have pre-loaded my blog this week with the first chapter of some of my books.  Please check back every day to get a new chapter.  I will see you all when I get back and fill you in on the happenings at the RWA conference.  Enjoy!! 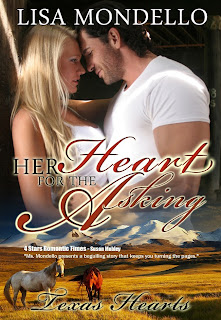 HER HEART FOR THE ASKING ~ Book 1


Mandy Morgan swore she’d never step foot in Texas again after Beau Gentry left her for life on the rodeo circuit eight years before. But now her uncle’s heart is failing and she has to convince him that surgery will save his life. She never dreamed the first thing she’d see when she stepped off the plane would be her biggest nightmare...the one man she’d never stopped loving.

Order HER HEART FOR THE ASKING: