Read Chapter One of THE MARRIAGE CONTRACT by Lisa Mondello 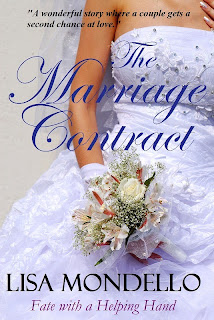 
When Ruthie Carvalho finds an old birthday card with a marriage proposal scribbled on the back, she figures she's hit pay dirt and is destined to get her 35 year old daughter married.

The trouble is, Ruthie can't stand Cara's boyfriend and Cara is just stubborn enough to push in the opposite direction of what her mother wants.

The way her mother clutched the card, fanning herself from mid-day August heat, Cara knew this was only the beginning. These next three weeks were going to be the longest weeks of her entire life.

Brenda sounded again with a repeated buzz that spoke of urgency. If he didn't make a quick getaway soon, the senior partners were sure to barrel through the doors of his office in full justifiable protest.

Cara smiled regally at the many people inspecting the odds and ends she and her family had accumulated her entire life and had displayed on their front lawn for purchase. She was annoyed, to say the least, at their perusal. This was her life they were scrutinizing!
When had she gotten so sentimental? Sure, her parents were moving away, selling the home she loved so much. But she'd left home long ago. Maybe it was just her time of the month. No, that would mean she had perpetual PMS for feeling the way she did. Who could possibly endure that?
Or maybe...it was because Roger, the man she'd been dating for the past year and a half, had become a fixture she wasn’t sure she wanted to keep in her life. She'd been a success in business, lived on her own in her Back Bay condo for the past few years. But this thirty-five thing was beginning to hit home.
She pushed the thought away, refusing to believe that her internal clock was waging war, and she was losing the battle.
“Is this real crystal?” a young woman—still a girl really—asked, holding the carafe Cara had given her mother as a birthday gift when she was fifteen. Her other arm was wrapped tightly around the waist of a young man. Amorous glances and giggles reflected the youth of their love. She wondered if they were newly married, filling their home with items they would someday put up for sale on their front lawn.
“Yes,” she replied shortly, watching the young man knock over a vase. He had a familiar stand. It took her a moment, but she realized that he reminded her of a young Devin Michaels.
Funny. Ever since she found that damned birthday card, her mind wandered until it settled on Devin Michaels.
“We’ll take it,” the young man said, smiling affectionately at the girl. After digging through his wallet, he handed her the amount indicated on the little white tag Cara had so carefully placed on the bottle the previous evening. With their hands entwined, the young couple walked away.
That's when she thought she caught a glimpse of him. Devin Michaels. She stood on the far side of the lawn, squinting from the sun’s harsh rays to focus on the man strolling through the open white picket gate. A dozen or so people had stopped and parked along the side of the road and were now leisurely waltzing across her parents lawn.
The man could just as easily be someone who lived along the beach, just out for a stroll. She’d lived away from home so long that she’d lost touch with the comings and goings of neighbors. It couldn't possibly be Devin just because her mind suddenly wanted it to be. But as he ambled closer, she knew without a doubt it was Devin.
A glimmer of recognition registered on his face when their eyes met, and his mouth tilted to reveal a perfect smile. Her breath lodged in her throat, and she couldn’t keep from feeling giddy. Nibbling on her bottom lip, she fought to compose herself.
The years had been good to him. The lanky boy he once was had filled out in all the right places. The man sauntering toward her now had wide shoulders and ripples along his chest, clearly visible beneath his polo shirt, a telltale sign that he spent time working out regularly. His charcoal eyes had deepened in color, giving off a masculine power of attraction that seared straight through her. It wasn't the Devin Michaels that she remembered from her youth, the shy but funny friend she'd teased so often. He was a man now. Powerful, stunning in movement and frightening with his dynamic presence all at the same time.
But he was still Devin Michaels, her childhood buddy.
“Devin,” she said, catching her breath when he was finally standing before her. She looked up and noticed the inches he'd grown taller. He was now at least six inches taller than her five foot seven inch frame.
“Hello, mia Cara.” The words of endearment rolled off his tongue with ease, sounding as soothing as the ocean that lulled her to sleep at night. My dear one was the meaning. Her grandmother had referred to her that way on countless occasions in her youth, which Devin had teased her about when he'd been privy to hear. But this time, the pure emotion with which he spoke the simple words cascaded over her like the incoming tide.