Please join me in welcoming paranormal romance author G.D. Ogan to Conversations today! Guy is here to talk about his new release, Immortal Relations ~ Coming Out, the third novel in his Immortal Relations Series. So be sure and check out the blurb, cover and excerpt below! And take a look at the first two books in the series too! 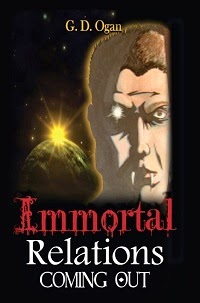 The third book in the series is "Immortal Relations Coming Out." In the second book it became clear that the Marxist regime in Washington D.C. had known of and been in collusion with the invasion of Siberia by Communist China. Seeing the unmistakable signs that the Constitution and Bill of Rights of the United States were in peril, our guardian vampires feel the need to act. Realizing that the abrogation of the founding documents is the prelude to a Marxist Coup, volunteers from guardian covens set up a new coven in Southern Canada to closely monitor events in America and to stand ready to support those who would follow their oath, "To protect and defend the Constitution against all enemies both foreign and domestic." The regime in Washington finds out that the group now in Canada was partly responsible for the defeat of their Communist Allies' attempted invasion of Siberia. Angrily reacting before knowing all the facts is a hallmark of dictatorial leaders and it is no less so in this case with attempts being made to destroy the coven in Canada. Fortunately, these ill thought out efforts backfire against the Washington regime, who in a snit refuse to listen when scientists try to warn them of an impending danger to the entire Earth. It is left up to the guardian vampires and their friends in free-world governments to meet the Extinction Level Event head on. Again, while there is togetherness (sex) it is far less explicit than in book one.


Excerpt from IMMORTAL RELATIONS ~ COMING OUT

This excerpt is from page 69 and the scene is the wedding of the vampire daughter of Magdalena and Gary whose name is Eviana to the human, Victor a Canadian Police Officer and is from Gary's POV:
We boarded several limousines which whisked us over to where the marriage ceremony would be held and there we saw many of our old friends who had been there the day Magdalena and I had wed at the same location. Eviana had on the same dress Magdalena had worn the day she and I were married. It had a few minor alterations since Eviana was not quite as tall but had an ample bust and wanted the neckline plunging to show off one of her best features. Aside from these modifications, and the dazzling white color, it had the same haut-couture cut as the light blue, lacy, scalloped, and layered, shape-hugging dress I’d seen Magdalena in the first time I’d met her.
I guess I’d been so overwhelmed by the surprise my friends had prepared in my own wedding to Magdalena that I hadn’t really noticed all the white flowers that I now saw and which smelled so very sweet… I think they were Gardenia’s arranged hanging in twists around and down polls placed alongside as well as in the back and in front of the wedding venue. As I walked Eviana down the aisle, I could hear her thoughts of overwhelming love for Victor and the beauty of it was so intense that it was all I could do to keep from crying. I also could hear Victor’s concern that he might faint due to the picture of loveliness walking toward him and prepared to be his bride. I sent him my thoughts; Steady on young man, the ceremony will be over before you know it and you’ll have a long time to enjoy your life with this wonderful lady. If you can’t read her thoughts right now, I can and I can confirm her deep love for you. I am so very proud to welcome you into the family as my son-in-law! What is it the Brits say, something about keeping a stiff upper-lip? Well, just keep SOMETHING stiff for a little bit longer. Then I smiled at him and he smiled back, or maybe he was smiling as his future bride drew nigh. Whatever it was, he seemed to take courage in the stars he saw in her eyes. At this realization I could feel tears on my own cheeks.
Once again, Vladimir had a gift of a dazzling five carat Red Ruby mounted in a Gold ring. This looked to be a twin to the one he had provided when I wed Magdalena. I was sure this was also one from the Hermitage collection for Victor, the groom, to place on the finger of Eviana, his bride.
There was a reception held afterwards; however I only got a parting glance of Victor and Eviana as food evidently wasn’t on their minds. Vladimir had arranged for them to stay in the bedroom at the Menshikov Palace which was completed in 1721 and was the most luxurious building during the time of Peter the Great.
Soon, Vladimir had corralled us and we were transported to the same palace where we entered a private suite of rooms that had been prepared for us. There we found Vlad, Grandmother and Roger and after hugs and kisses we sat down to discuss the wedding and what we had accomplished at the Canadian Coven. 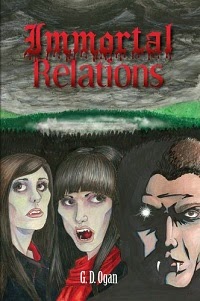 "Immortal Relations" is the first installment in the Immortal Relations Series summarized here: Finding out that his father had had a tryst while stationed in Prague, Czechoslovakia at the end of World War Two, Gary Logan decides to go to visit the city and see the building shown in the picture with his father in it. There he meets a beautiful younger lady who knows far more about his father than should be possible. Gary quickly realizes that Magdalena is much more than she appears to be, but he also knows that he is falling in love with her despite her "eccentricities." Throwing caution to the wind, Gary pledges his love for "Maggie" and offers himself to her in any capacity she will have him. Thus begins the story of love and passion as Gary changes to become a member of the group of guardian vampires sworn to defend humans against the evil type of vampires, human criminals and evil politicians. The first book has been described by one reader as: “A tale filled with life lessons, love, sex, action and adventure, complete with new insights into the powers of the immortal vamps, and fresh takes on the complex inner working of their existence.” The reader goes on to say that it has become his, "holy-grail of vampire novels." There is a good deal of "explicit togetherness" in the first book, not meant to be salacious but to show even the good vampires don't suffer the sexual hang-ups so common among humans, so the first book has been called Erotic and is meant for mature adults. 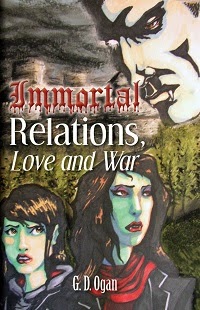 The second book in the series, "Immortal Relations, Love and War" continues  the story, but contains a discussion between Gary and Maggie, in the early part of the book, which serves as a review of important material from the first book to allow a reader to skip the more explicit material in book one while still having that background to continue into the "action on steroids" that is book two. In this book, readers will find terrorist decapitation of the Russian Government and our good vampires responding to stop the invasion of Russian, Siberia by Communist China to capture its oil, gold and other mineral riches. Such a war could go nuclear hazarding the entire world. Greedy OPEC Ministers direct a terrorist act to stop the flow of cheaper Russian Oil to the West,  thus members of the Residency Coven try to resolve that problem as well as the imminent collapse of the twenty five year old cap over the Chernobyl Reactor and the potential Extinction Level Event the leaning reactor building at Fukushima, Japan poses. While there is still some sex in book two it is far less explicit but the second book is still for mature adults.

Note: If you enjoy Paranormal-Romance Novels but your "significant other" thinks they are all just mushy tear-jerkers (believe it or not some do feel that way) have them read one of these books, especially the second book which has more action than most war novels. 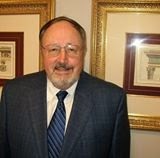 G.D. Ogan graduated from Los Altos High School in Northern Calfornia in 1962, where he ran track & cross-country. He also ran at Foothill Junior College where he earned an A.A., transferring to Texas Christian University in Fort Worth, Texas, earning a B.S. Degree. While in the Air Force, he earned a Master of Arts at Ball State University in their European Campus. He retired from the Air Force in 1988 with over 20 yrs. of service. He then obtained a second Masters Degree in Counseling and Human Development from Hardin-Simmons University, in Abilene Texas and operated his own evaluation service for Attention Deficit Disorder and wrote "Can Anyone Help My Child?" to help those who were out of his area. Most of those books he donated to libraries and gave to those who needed help. He also retired as a Psychologist from the Texas Department of Criminal Justice (Prison System of Texas).