Please join me in welcoming author Stephanie Norris to Conversations today! Stephanie is here to talk about her new book, Mistaken Identity! So, check out the cover, blurb, and excerpt below. And don't forget to check out her interview too, and get to know Stephanie Norris! 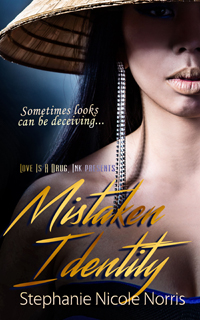 
The only thing Briana and Tiana have in common are their identical looks. For Tiana, life is one challenge after another, but her greatest struggle is sharing a face with the sister she despises. Tired of living in the shadows, she comes up with a plan to finally have everything she ever wanted.

Everything seems to come easy for Briana, including her beautiful children, loving husband and dynamic career. Briana's charmed life is ripped apart when she wakes up in the hospital with no idea who she is and no memory of her former life. With the help of the handsome stranger who saved her, Briana builds a new life and finds new love, while Tiana won't rest until Briana has no life at all.

Chris rounded the stairs that led to the first level of his loft and looked out of the peep hole. Sure enough, it was his son’s mother and she looked lit up. He took a deep breath and opened the door.

She stumbled as the door swung open.

“Why are you knocking on my door at three o’clock in the morning?”

“No, Sandra, you need to go home. Where is Christopher?” he asked.

“Well, he ain’t gone be at the club with me!” she stated matter-of-factly. “So that was a dumb question.”

Chris sighed, unable to continue the dance they did at his front door. “Go home,” he said, and slammed the door in her face.

“Oh no you didn’t!” he heard her say from the other side of the door.

Boom! Boom! Boom! She beat on the door again and crossed her arms. “I’m not leaving until you talk to me, so you might as well come back to the door. I don’t care if your neighbors call the police. I will stand here until they arrive!”

Tiana pushed past Chris. He reached out and grabbed her arm to stop her.

“Look, this heffa ain’t going away, and I’m about to give her a piece of my mind. She’s ruining our night!”

She pivoted on her heels and went to the kitchen. The banging on the door continued. She shook her head and ran her fingers through her hair. Looking in the cupboard she removed a wine glass and popped the cork on a bottle of Emmolo Merlot that had been sitting on ice since their earlier tryst. She rolled her eyes as she listened to Chris in the front room arguing with his son’s mother. This is the last thing she needed. She sipped from the glass and closed her eyes as the caramelized plum, brown spices and rich fruit flavor oozed down her throat. She took another swig; it was delicious, but what would’ve been better is if she could get back into bed with Chris.

“Enough of this,” she said.

Tiana made her way back to the living room where the couple was still arguing. She cleared her throat and stepped into view, letting her robe open just enough to show off her bare chest and panties. She took another swig of her wine as she watched a look of fury cross the woman’s face. Tiana almost laughed. Chris didn’t look amused, but he wouldn’t dare tell her otherwise.

“Baby, should I go? I don’t want to cause any trouble,” Tiana purred innocently.

Chris gave her a knowing look. He knew that she was aware that their argument had nothing to do with her. Tiana just wanted to make her presence known.

Tell us a little bit about yourself.

I’m from Chattanooga, Tennessee, lived in Atlanta Georgia for four years until 2013.  I had my first child in 2015, a boy, Noah, who was born premature at 23 weeks gestation.  Life was hard, but with a lot of prayer from me and others, Noah is doing well and thriving. God is good! I’m a stay a home mom, I love to read and write.  Mistaken Identity is my sixth published book.

Where did your inspiration for this book come from?

My debut novel, Trouble In Paradise, is part of a four book series.  With Mistaken Identity, I knew I wanted it to stand alone, which presented a challenge for me.  I have an issue with falling in love with my characters and not wanting to let them go.  So, to begin a story and bring it to a complete end was hard.  However, I thoroughly enjoyed it every step of the way.

What is your favorite thing about the writing experience and why?

Being able to create a world that moves, with people and scenarios that take the reader to another place and time.  The escape from reality.  To fall in love or out of love.  For me, it’s euphoria.

What made you choose to write in the genre that you write in?

That’s an interesting question, especially since as a young adult I read, horror, thrillers and suspense novels.  However, I have a passion for writing tales of romantic suspense.  I love writing about love, but let’s face it, nothing is ever all peaches and cream, and with that comes the drama.  I put my characters in situations that are hard to get out of, which makes the scene that much more intense.

What was the first moment you knew you wanted to write?

Let’s just say, I’ve always had an overactive imagination, but if I have to pinpoint a time, it would be in 2010. I would lay in bed at night and a whole scene would run about, people talking, laughing, making love, fighting.  I remember elevator scenes, a house burning down, and I couldn’t sleep.  It got to the point where I had to ask myself, ‘what is going on with you?’.  A voice said, maybe you should get it out of your head by writing it down.  And then there was Trouble In Paradise.

If your book was turned into a movie who would you want to direct it?

What projects do you have planned for the future?

I have quite a few projects in the works, some from different genres.  My next book released will be “Until My Last Breath,” Trouble In Paradise book 4, which is also the finale.  Also, “A Loveless Marriage,” which is my first interracial novel. Next, “An Unfortunate Accident”, which is my first crime novel.  I’m writing a non-fiction story based on my pregnancy, early delivery and my son’s fight to stay alive.  It’s titled, “Against All Odds, Surviving 120 Days in the Neonatal Intensive Care Unit”.  I also have a seven book series in the works. The first book is titled “Forever I Will,” a Love me or Leave me novel. 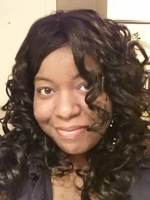 Stephanie Nicole Norris is an author from Chattanooga Tennessee with a humble beginning. She was raised along with six siblings by her mother, Jessica Ward. Always being a lover of reading from early childhood Stephanie loved to read books by R.L. Stine. With a natural talent for writing Stephanie started her journey in 2010 to bring her stories to life. In 2011 her Debut Novel "Trouble In Paradise" was completed and shortly published in early 2012. Stephanie's words tell stories of love, drama, deception, suspense, and restoration. She is inspired by the likes of Eric Jerome Dickey, Jackie Collins, Gwynne Forster, and more. She resides in Chattanooga, Tennessee.


Connect with the author: