Please join me in welcoming New York Times bestselling author, Dana Martin to Conversations today! Dana is here to talk about her Broslin Creek Boxed Set, which is on sale for only 99¢ for a limited time! That's three gripping, fast-paced novels of romantic suspense, so grab this set for only 99¢ today! Check out the cover and blurb below, and don't forget to check out her bio too and get to know Dana Martin. 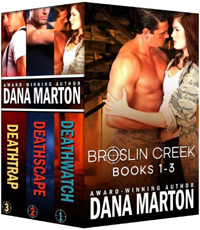 DEATHWATCH: The only person who can identify the most notorious hit man in the country, Kate Bridges is running for her life. Murphy Dolan is in the Army Reserves, returning from his 2nd tour of duty, only to find a stranger hiding in his house. She's scared spitless. He's completely burned-out on violence. Neither of them has any trust left to give

DEATHSCAPE: After a near-death experience, artist Ashley Price is compelled to paint visions of the dead, and fears she's gone crazy. Then she paints a man buried alive and, recognizing the surroundings, she rushes to save him

Instead of being grateful to her for rescuing him, Detective Jack Sullivan accuses her of being in league with a serial killer. He swears he will put her behind bars. Except, the more time he spends with her, the more he falls under her spell. Can he trust her, or is he walking into another deadly trap?

DEATHTRAP: She'd been "the sick girl" for most of her life. She refused to go straight to "the weird girl". Heart-transplant recipient Sophie Curtis has been in her own antiseptic bubble for so long, she just might not be able to venture out into the real world again. Her spooky body memories are scary enough, but then she finds herself in the cross hairs of a killer.

"Love was blind, people said. But lust was blind, deaf and reckless." Ethan Bing hadn't been a great romantic before he became a cop. Whatever shred of optimism he had left after becoming Broslin Chief of Police had been seared out of him by the unsolved murder of his wife two years before. A new case brings the killer within reach just as Sophie pops into his life. She gets through his defenses like no other before, but soon it becomes clear that she's been selected as the killer's next victim.

"These tales artfully combine thrilling adventures with a enhancing element of paranormal that adds to the chills up one's spine.” Night Owl Reviews 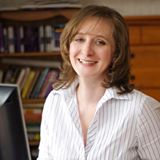 New York Times and USA Today bestselling author Dana Marton has thrilled and entertained millions of readers around the globe with her fast-paced stories about strong women and honorable men who fight side by side for justice and survival.

Kirkus Reviews calls her writing "compelling and honest." RT Book Review Magazine said, "Marton knows what makes a hero...her characters are sure to become reader favorites." Her writing has been acclaimed by critics, called, "gripping," "intense and chilling," "full of action," "a thrilling adventure," and wholeheartedly recommended to readers. Dana is the winner of the Daphne du Maurier Award of Excellence, the Readers' Choice Award, and Best Intrigue, among other awards. Her book, TALL, DARK, AND LETHAL was nominated for the prestigious Rita Award. DEATHSCAPE reached the #1 spot on Amazon's Romantic Suspense Bestseller list.

Dana has a Master's degree in Writing Popular Fiction, and is continuously studying the art and craft of writing, attending several workshops, seminars and conferences each year. Her number one goal is to bring the best books she possibly can to her readers.

Keeping in touch with readers is Dana's favorite part of being an author. Please connect with her via her web site (www.danamarton.com) or her Facebook page (www.facebook.com/danamarton).

Having lived around the world, Dana currently creates her compelling stories in a small and lovely little town in Pennsylvania. The fictional town of her bestselling Broslin Creek series is based on her real life home where she fights her addictions to reading, garage sales, coffee and chocolate. If you know a good twelve-step program to help her with any of that, she'd be interested in hearing about it! :-)