Please join me in welcoming award-winning author Jenna Ives to Conversations today! Jenna is here to talk about Programmed To Please, book one in The Tau Cetus Chronicles! So be sure and check out the cover, blurb and excerpt below! And don't forget to check out her bio too and get to know Jenna Ives.


Thanks for hosting me today, Lisa!

Little known fact about me: at age eleven, I decided I wanted to be an astronaut. But since I get sick on roller coasters, I figured space travel wasn’t really a viable career option, so I became a sci-fi author instead. (Not at age eleven, of course, although I did actually write my first action adventure story at eleven, which was published in my elementary school newsletter…)

I write sci-fi romances with high emotional stakes and lots of plot conflict. I particularly enjoy dropping my two main characters into an impossible situation, and then watching the sparks fly as they try to resist falling in love!

That’s what happens in the first book of my new series The Tau Cetus Chronicles, which is called Programmed To Please. 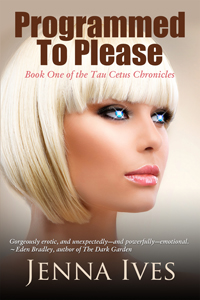 bring down the planet’s most notorious arms dealer, Marque Callex. The police have never been able to get close to Callex, and Jai’s assignment is to uncover information on his illicit weapons dealings that will lead to his conviction.

Reclusive arms dealer Marque Callex only accepts an invitation from Beautiful Dolls because with his deadly line of work – and the dangerous secrets he’s keeping – he can’t afford to let a real woman into his life. But neither Jai nor Marque are what they seem, and their week together has consequences neither expect.


Programmed To Please is a HOLT Medallion merit award-winner.

“Turner, I’m sending you undercover as a Beautiful Dolls robot.”

She shifted tiredly on her feet in front of his desk. “Sir?”

For an answer, Rainey leaned forward in his chair and pushed a button on the console on his desk. “Send in Mr. Carron.”

A minute later, a short man stood in the doorway. He was such a stereotype that Jai felt herself stiffen. Thick glasses… hair askew… frankly, all he needed was a lab coat with a pocket protector to complete the picture. Savant. Adept. Carbon-copier.

Maybe her boss hadn’t been making a joke.

Rainey cleared his throat. “This is Anson Carron. Creator of Beautiful Dolls.”

If the abrupt and impersonal introduction annoyed their guest, he didn’t show it. His eyes had locked on Jai, and were scanning her up and down in a way that felt decidedly intimate despite the generic, navy blue one-piece uniform that she and everyone else on the Tau Cetus police force wore.

“This,” Rainey said hotly, “is Jai Turner, one of my best agents. She’s human.”

The little man shrugged. “She meets his prime criteria. Of course, it would be better if I could see her without her clothes on before I make a final assessment.”

What? Jai stiffened even more. “Commander!”

Rainey let out a loud sigh. “Sit. Both of you.”

The two took the hard chairs arrayed around Rainey’s desk. Jai crossed her arms and legs defensively. It was obvious she didn’t anticipate liking whatever the Commander might be about to say.

Rainey ran a hand through his grey-black hair and looked at the partners. “Before I start, I have one thing to say to you. Marque Callex.”

That changed everything. The infamous name had her leaning forward in her chair, now eagerly waiting for Rainey’s next words.

“You know how long we’ve been trying to get close to this guy. We may now have a chance, albeit by a very unconventional route.” Rainey nodded toward their guest. “A month ago, Mr. Carron here ran afoul of the law. In an effort to save his neck – and his very lucrative business – he suggested a unique proposal in return for us not pursuing charges against him.”

“What kind of proposal?” Jai asked.

“A clever one, as it turns out.” Rainey smirked. “Mr. Carron agreed to send an… invitation… to Marque Callex, in the guise of offering ‘a select number of high-powered businessmen’ the chance to sample the latest model of Beautiful Doll for free, in exchange for their feedback on the product. In reality, Callex was the only person to get this invitation.”

Jai’s mouth set in a disgusted line. “And he accepted.”

“He did,” Rainey confirmed. “It was a gamble, but it paid off. In this ‘latest model,’ clients are able to customize their girl. Callex filled out the form specifying the criteria of his ideal Beautiful Doll, and now all we have to do is fulfill his requirements.” The Commander gave Jai a pointed stare. “With you.”

Jai’s eyes went wide. “You want me to impersonate a sexbot?”

Jai let out a relieved breath. “Well, that rules me out. I’m brown-haired and brown-eyed.”

“Easily fixed,” her boss pointed out. “You fit the most important characteristic: athletic build. We can’t fake that, but we can correct the other things with hair dye and contact lenses.”

Jai scowled. There was absolutely no way she was going to volunteer for this. Have sex on command? Not a chance. Not even to bring down a man they’d long been after for suspected weapons smuggling. Besides, she could never pass for a robot. She had a heartbeat, for goodness sake!

Rainey sighed into the stubborn silence. “Do I really need to play the Joran Breaux card with either of you?”

A spark of anger shot through Jai. Joran was the second – and definitely much more personal – reason they were after Marque Callex. Joran had been sent in to infiltrate Callex Industries from the inside, to discover how one of the government’s top weapons contractors was secretly diverting arms to militant countries. Three weeks later, Joran’s body had turned up – in pieces – in a recycling center a hundred clicks away.

Jai would relish the chance to avenge the death of a fellow Tau Cetus agent, but was becoming a sex slave really the best way to do it?

Rainey scowled. “This may be our best chance to get to Callex. But if you’re not up to it, Turner, I’ll find another female agent with athletic build who’s more committed to her job.”

Crap. Now Rainey was doubting Jai’s dedication to the force. Silence stretched in the room while Jai considered her options. Her very limited options. As in, none. “I’ll do it.”

Jai’s mouth set into a mulish line. What real choice did she have? Marque Callex needed to be stopped.


If Programmed To Please sounds like a fun read to you, here are some buy links:


I love to connect with readers and other authors! Hit me up one of these ways:


Thanks so much to Lisa for hosting me today!
Jenna