Please join me in welcoming an amazing author and an amazing friend, author Nicole Burnham! I'm thrilled to have Nicole join us on Conversations today because she's here to talk about the long-awaited story in her popular Royal Scandals series, The Wicked Prince! So be sure and check out the cover and blurb below! As an added bonus, Nicole has a wonderful and insightful interview for us. And don't forget to check out her bio too and get to know Nicole Burnham. 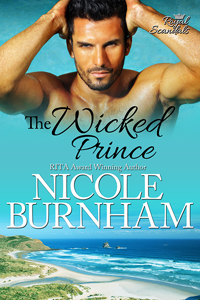 Prince Alessandro Barrali is known for his wild ways. After he's compelled to stand in for his staid identical twin, all Alessandro wants is to escape the fishbowl of palace life and indulge himself. When he awakens aboard the royal yacht awash in hedonism, yet bored out of his mind, he decides a new quest is in order.

Francesca "Frannie" Lawrence needs capable volunteers at the children's shelter she's opened on the tsunami-devastated South Pacific island of Kilakuru. When Prince Alessandro Barrali appears on her doorstep, she's sure she has a nightmare on her hands. Since the royal family provide the shelter's financial backing, she can't turn him away Nor can she deny that the children adore him. Can she find a way to protect the children in her care—and the walls around her heart—against a challenge from a wicked prince?

Add THE WICKED PRINCE to your Goodreads bookshelf HERE!

What are you reading now?  What’s in your To Be Read pile?

I’m nearly finished with OBSESSION, a romantic suspense by Nora Roberts. Next up is Tina Fey’s BOSSYPANTS. On the TBR, I have Linda Howard’s TROUBLEMAKER, all of Jim Butcher’s Harry Dresden books (I plan to binge read!), and a new contemporary romance from Julie Anne Long. I also have Christina Dodd’s upcoming Virtue Falls suspense and Emily March’s next Eternity Springs romance on pre-order. I read books from each of those series as soon as they’re available.

Tell us about your current project.

I’m in the midst of my Royal Scandals series, which centers on the royal family of a fictional Mediterranean island nation called Sarcaccia. Each of the stories focuses on one of the royal family’s offspring…both legitimate and illegitimate. The king and queen have a long, complicated romance, so their relationship with each other and with their children forms the backbone of the series. I’ve had the best time writing about their relationship (they’re in their sixties) and simultaneously delving into the complexities of the younger generation of royalty. How do you develop meaningful relationships while in the public eye? How does being a member of a wealthy royal family affect your choices? Romance with royalty isn’t easy…for either party.

The next book in the series, THE WICKED PRINCE, features Alessandro, the twin brother of the country’s crown prince. It’s a difficult task to be the second in line to a throne, especially when that role was determined by mere minutes. Alessandro lives a decadent life, but craves a meaningful role in the world, one separate from the royal family. He was a lot of fun to write, as was Frannie, a woman who truly challenges him.

You’re frequently asked whether Sarcaccia is real or if you based it on a real location but used different place names. Why do you think this question pops up?

I’ve worked hard to make Sarcaccia feel like a destination that’s only an airplane or ferry ride away. I didn’t base it on a real place, but I was fortunate enough to live in Europe for six years and still visit frequently. Bits and pieces of that experience help with the details that make Sarcaccia feel real.

I also do a lot of research. Based on Sarcaccia’s location near Naples, I know what’s likely to be sold in farmers’ markets, when tourist season would be, what fish the local fishermen would catch. I weave those details into my stories. Then, whenever my characters travel to a real place—I’ve set stories in Rome, Barcelona, and Dubrovnik—I spend a lot of time doing research, both in person and online, to ensure that what the characters experience is what a reader would experience. A reader who thinks, “That sounds like the street performer I saw in Barcelona…” is more likely to believe the rest of the story and the characters’ experiences.

I’ll also add…I love research.  I’ve never followed the traditional advice to write what I know. That would bore me to tears. I write what I want to know.

Do you plot your stories before you write them, or do you make them up as you go along?

I do a little of both. I like knowing the basics—a little about the characters and their conflicts—and I usually have at least the opening scene in my head before I begin. I talk over my ideas with three of my author friends (Susan Sizemore, Emily March, and Christina Dodd) and we brainstorm some possibilities for where the plot can go. I file those ideas in the back of my head, then start writing. The basics usually remain the same, and I often end up incorporating a few of the ideas we discussed while brainstorming. However, a number of scenes and nearly all the dialogue come to me as I’m writing. I learn a lot about my characters as I go, and I end up going back and doing a lot of editing to create a story that’s true to the people they are.

If my entire story were plotted out before I sat down to write, it’d make my life easier. But doing that would kill the adventure of it all, and the adventure is what I find most appealing about my job. It’s my hope that the same holds true for those who read my books. I want readers to find the story and characters as compelling as I do. The best adventures are shared! 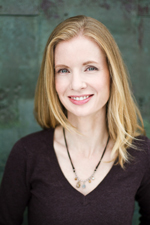 Nicole Burnham is the RITA award-winning author of seventeen novels and several novellas and short stories. Her next book is THE WICKED PRINCE, which will be released in August 2016. More Royal Scandals books are in the works.

You can learn more about Nicole, join her newsletter list, and read book excerpts or hear audiobook samples at her website, www.nicoleburnham.com.