Please join me in welcoming author Judy Hudson to Conversations today! Judy is here to talk about her new release, The Good Neighbor, book 2 in the Fortune Bay Series: A ramshackle cabin on the lake in the mountains of Washington State — a haven for people at the crossroads of their lives. So be sure and check out Judy's informative post below, and don't forget to check out her bio too and get to know Judy Hudson!

Judy here. The stories of women who give up babies are painful and poignant, but often known. At least among women. The fathers have seldom been allowed a voice and, even today, many carry the loss with them silently for years. In this book, I wanted to give them a voice.

Readers have told me they’d like to know more about Stephanie, the matriarch of these stories so in The Good Neighbor, Stephanie gets her own story, and a bit of romance. 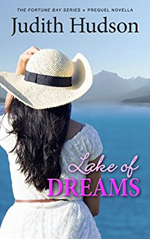 To celebrate the release of The Good Neighbor, I have made Lake of Dreams, the 100-page Fortune Bay Series prequel, FREE on all online platforms until the end of August. Don’t wait. You can get it today on Amazon, Nook, Kobo and the iBooks Store. 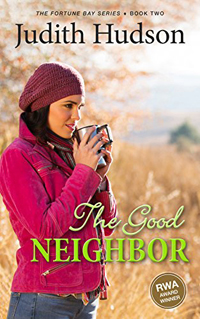 Now, more about The Good Neighbor,

Frankie Alvarez has built a life in Fortune Bay, has a good job at the high school and owns a pretty bungalow on Majestic Lake. But her rich, overbearing father still sends her a check every month—never a note, just a check. And every month she rips it up. She’s happy with things the way they are and doesn’t want anything to change.

Then Sean Murphy moves into the cabin next door. He’s just the kind of successful young exec’ Frankie’s father would want her to marry. If she were looking for a husband—and she definitely is not—she would look for someone completely different. Someone sensitive and creative. Trouble is, Sean’s so darn charming, and cooks like a dream, that her resolve to shut him out starts slipping away.

When Sean discovers Frankie hasn’t spoken to her father in years, he can’t help stepping in. He hates to see them estranged. He’d give anything for someone to tell him what happened to his daughter, the one he gave up fifteen years ago.

To find out more about the series at my website: www.JudithHudsonAuthor.com.

Thank you for reading,
Judith Hudson 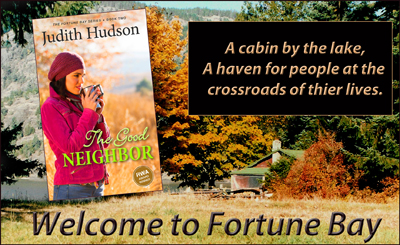 An Excerpt from THE GOOD NEIGHBOR

Frankie’s eyes widened and her breath hitched when Louise spun her chair around to face the mirror.

“Oh my,” she whispered. The transformation was miraculous.

Iridescent blusher on her cheeks caught the light as a shy smile flickered across her face. Her hand tentatively brushed the fall of shiny brown hair that covered her shoulders. Louise was indeed a magician. She had picked up the golden, sun-streaked tendrils from around Frankie’s face and looped them back, catching each strand with a tiny pearl pin, creating an effect that was delicate, yet not uncomfortably overdone.

Frankie dipped her head slightly, turning from side to side to examine the makeup her friends had applied. It was more, much more, than she ever wore. In summer, with her skin dusky from the sun, she usually wore none at all. The pearl pink on her cheeks and eyelids added a sparkle that made her feel as if she’d been sprinkled with fairy dust and was ready for the ball.

The doorbell rang and Maddie, still in her underwear, ran for the bathroom, crying, “If it’s Jake—don’t let him in.”

Frankie headed to the front door. “It’s probably Stephanie and Sarah.” The heels were starting to feel pretty good. Like riding a bicycle, you don’t forget that kind of training.

She opened the door and Sarah shot through, no doubt sensing the feminine initiation ritual unfolding within. Frankie knew the allure only too well, having grown up alone with a single father herself. Sarah was lucky though. She’d have Maddie to help her negotiate the quagmire of her teenage years.

Frankie turned back to the doorway. Instead of Stephanie, Sean stood on the stoop. His baby-blue eyes slid over her, thorough as an airport pat-down. A blush crept up her neck. She straightened her shoulders, determined not to show how much the attention unnerved her. Forcing a smile, she looked him up and down. “Very GQ, Sean.”

The man could wear anything and always managed to look like an ad in a classy men’s magazine. His compact form exuded confidence and standing there with his hands in his pants pockets, he looked casual and relaxed in his dove grey tux.

Not her type at all. Groomed for success, he looked like he belonged in a board room or at her father’s club. In fact, he was exactly the kind of guy her father loved. Exactly who he had always set her up with. Exactly what she’d been trying to escape when she moved to Fortune Bay.

But despite his cosmopolitan sheen, Sean had grown up here. Frankie had always wondered why he’d returned to live in this rainforest town. His easy blend of sophistication and small town charm left her running hot and cold. Usually hot. Darn it. Not that he ever noticed.

And to top it off, oh yay, good fortune had made him her date for the day. Mercifully, not her actual date, but as maid-of-honor and best man, they would undoubtedly be thrown together frequently throughout the celebration.

For the first time in their acquaintance, Sean didn’t seem to have anything to say. Frankie looked down at the flowery dress. No wonder. He was probably wondering how he’d gotten stuck with her. Not that there was much either of them could do about being paired up together for the wedding.

Nerves bounced against her stomach walls like caged butterflies at the thought of dancing the first dance with him tonight. Panic or excitement? She hadn’t a clue. She chewed on her lip. Pull yourself together.

The silence stretched between them, hot and sticky, until he finally said, “You look fabulous, Frankie.” His hand came up and brushed her hair back over her bare shoulder, lingering for an instant on the brink.

Sean was a toucher, and entirely too easy with a compliment. She knew this from watching him with other women ever since he’d returned from Europe two years ago when his father died. It took all her self-control to hold her ground and not step back.

Then his eyes swept down to the revealing bodice, and widened slightly. Her shoulders inched forward. Damn push-up bra. She ransacked her brain for something to say.

“Thanks for bringing Sarah over.” His eyes snapped up to hers. “How’s Jake doing?”

“Nervous. Battling his bow tie. But don’t worry, Mom is at the farm so he’ll be on time.” He looked at his watch. “I’d better go. Guests will be arriving already. See you there.” Swinging back down the stairs, he headed across the grass in his shiny black shoes, in the direction of the cabin and Maddie and Jake’s new house.

Frankie watched him disappear into the trees. She took a deep breath and blew it out. She had to keep it together today, but it would be hard if she was running into Mr. GQ every two minutes. 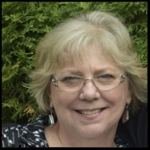 Judy grew up in Toronto Canada and St. Louis MO, then moved to the Pacific Northwest where she now lives on beautiful Vancouver Island.

Her romantic women's fiction series, Fortune Bay Books, is set in the Pacific Northwest. In each book, someone at a crossroads of their life moves into a ramshackle cabin on Majestic Lake where they work through their problems with the help of friends and family, and the occasional nudge from the friendly spirit of Aunt Augusta. If a romance grows in the process, and it always does, well, so much the better.

As an landscape artist and photographer, the setting of the story is very important to Judy. "I've painted in the area for many years and I think it helps me make the setting real for the reader, helps draw them into the story. My characters are often artists, like Maddie, the darkroom photographer in Summer of Fortune who is at Fortune Bay for the summer to work on her first professional show, and Stephanie, the widowed matriarch of the clan who is finding a new life as a painter."