Please join me in welcoming USA Today bestselling author Dale Mayer to Conversations today! Dale is here to reveal an excerpt from her upcoming Sleeper Seals romantic suspense novel, MICHAEL'S MERCY, set to release on October 3rd. So be sure and check out the cover, blurb and excerpt below! She's also offering readers a chance to win one of five advance reader copies. You'll find the Rafflecopter contest entry form below the excerpt. And don't forget to check out her bio too and get to know Dale Mayer. 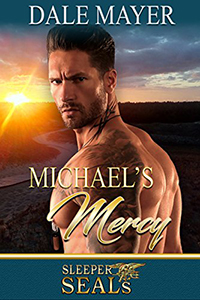 It’s been a year since hardened Navy SEAL Michael Stanton walked away from his career. He never thought to go back, but then his former commander calls with the news that an old friend was murdered while undercover – and he needs Michael’s help.

Mercy got the job as a maid that her sister had last held – just before she disappeared. With the police lacking leads and interest, Mercy decides it’s up to her to find out what happened. Inside the huge home, she meets Michael and becomes immediately suspicious ... and immediately attracted.

When they collide in the worst way possible, she realizes he's not who he seems either.

Can they each find the truth about their objectives and about themselves? Or will the terrorist get wind of the traitors in his midst and take care of them before they can take care of him?

Each story in this multi-author branded series is a standalone novel and the series can be read in any order.

Welcome to Michael’s Mercy, book 10 in Heroes for Hire (and Sleeper SEALs #3) reconnecting readers with the unforgettable men from SEALs of Honor in a new series of action packed, page turning romantic suspense that fans have come to expect from USA TODAY Bestselling author Dale Mayer. This book is part of the continuity series SLEEPER SEALS.

She pulled back from Michael’s embrace, hating that lassitude overcoming her, wanting to stay nestled close to him. “What about the rest of the night? Do you think I should return to my place?”

She frowned. “I left my toiletry bag in the bathroom.”

The two stared at each other as if across an impasse. Then she shook her head. “It’s not, but I don’t want to leave anything of me behind. I know that doesn’t sound right, but it feels right to say it. There is something so very wrong about this place that I want to make sure I take away everything that’s me.” He raised an eyebrow at that, but he didn’t mock her, for which she was grateful.

“In the morning I’ll walk over with you, and we’ll get it.”

“And what is your excuse?”

“I wasn’t planning on using an excuse,” he said. “If I have a lady stay for the night, I always make sure she gets home safe.”

She frowned at him.

He raised a hand when she went to argue and said, “No arguments. We need sleep.”

“Ha, like I could sleep now.” She walked back into the bedroom, the sheet falling slightly. When she’d dashed from the bed, she’d pulled the straps of her bra off her shoulders. She quickly pulled them back up. In her panties and bra, she tossed the sheet back on the bed and remade it. “We’ve already destroyed your bed tonight.”

“So no reason we can’t destroy it again, is there?” he asked with a devilish note in his voice.

She shot him a smirk. “You should be so lucky.”

He pointed to her shirt, still over the camera.

He quickly divested himself of his jeans while she watched, her heart speeding up at the bulge in his underwear. She deliberately closed her eyes and pulled the blankets up against her shoulders. Because the truth was, she did want to roll over and welcome him into her arms and rip up the sheets. But that was hardly the best idea right now.

And she’d never want an audience.

She lay there pondering the ins and outs of relationships as he got into bed behind her. She held her breath as the bed swayed as it took his weight. Finally, she rolled over and whispered, “I don’t think the bed can take any more shenanigans as it is.”

He gave her a startled look, then a shocked laugh. “I’m not that heavy,” he whispered in protest.

She chuckled but hopped out and stood, looking at the bed frame. She motioned him out of the bed. “Get up and help me lift this mattress,” she murmured.

Obediently he got out of bed and checked out the footboard and underneath the mattress frame. Cracked, he mouthed.

He held up a finger and then pointed at an odd crack in the frame. He bent over the footboard. She scrambled around the side of the mattress where she could take a look. Something was jammed in there. Michael pulled out his tools.

“It must be from the way you sat down,” she whispered, her tone flirty.

She grinned, but her eyes were sharp as she watched him pull out dog tags.

Pain whispered across his face.

She knew instinctively they were Sammy’s dog tags. And there was nothing she could do to help him through this moment.

He dug in again with his tools for anything else, and, sure enough, a slim USB key fell out.

He snagged it and put it with the dog tags, checked to make sure the little hiding space was completely empty, then as quietly as possible, they replaced the mattress and remade the bed. When they were back in bed, he plugged in the USB to his laptop and took a good look at what Sammy had stored there.

Photos of the cave that Michael had been in tonight and of the men unloading crates of weapons and crates of C-4 explosives. A man stood off to the side, holding a semiautomatic machine gun, dressed in jeans and a black T-shirt. The second photo was of Freeman, the owner of the estate, standing beside one of the open trucks and speaking to somebody else Michael didn’t recognize. It looked like packets of money were handed over, but the photo was too far away to make that distinction. He studied the photo.

She squeezed his hand, knowing Michael was also dealing with the loss of his friend.

With a smoldering look in his eyes, he leaned over and kissed her. But not just a kiss of Hey, how are you? or a kiss of Hey, we’ll get through this. This was a kiss of Holy shit, I can’t wait to hold you in my arms and devastate your self-control. Most definitely it was a promise. For later. The trouble was, she wanted that promise now. She didn’t want to wait.

What if something happened to her, like to her sister? Life was too damn short for waiting until she knew somebody better. What a fraud she was. She wanted this man any way she could get him. But what she didn’t want was to have him while somebody else was listening in. Decision made. 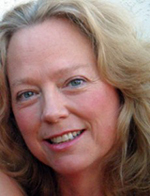 Dale Mayer is a USA Today bestselling author best known for her Psychic Visions and Family Blood Ties series. Her contemporary romances are raw and full of passion and emotion (Second Chances, SKIN), her thrillers will keep you guessing (By Death series), and her romantic comedies will keep you giggling (It's a Dog's Life and Charmin Marvin Romantic Comedy series).

She honors the stories that come to her - and some of them are crazy and break all the rules and cross multiple genres!

To go with her fiction, she also writes nonfiction in many different fields with books available on resume writing, companion gardening and the US mortgage system. She has recently published her Career Essentials Series. All her books are available in print and ebook format.