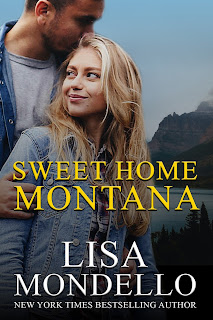 Dumped by a cheating husband, Katie Dobbs' life had gone off the rails and she is now back to square one, living in her parents' home in Sweet, Montana and working a job she hates. She refuses to stay in a dark and empty house as a constant reminder of her mistakes. So she did the only thing that made sense. She breaks into an old dilapidated chapel to figure out her next move and is nearly arrested by Caleb Samuel, her brother's high school friend who is now a handsome police officer in town.Caleb had heard Katie was having a hard time. Sweet was a small town and everyone knew everyone else's business. Except for one thing. No one knew where his sister Julie disappeared to 10 years ago and no one had heard from her since. Katie had been good friends with Julie before they'd both left Sweet. Now Katie is back. Buying a broken down chapel to renovate as a house is nuts when you don't know the difference between each end of a hammer. And Katie didn't. But she did know Julie, and maybe she'd be able to give him some insight into where Julie had gone. Caleb offers to help Katie renovate. But one problem after another threatens the project and leaves Katie thinking she'll never realize her dreams. Until she realizes she's falling in love with her brother's friend. Even as everything seems to be falling apart around them, can love help heal their hearts?

Katie sat in one of the pews in the back of the chapel and thought about how her life had gone off the rails. She rubbed her fingers together as she laid them on her lap and tried to ward off the bitter Montana cold. A gust of wind swept into the building, making a sudden chill race through her body. It was probably the flimsy plywood door she’d pulled away from the wall.
But then a beam of light swept through the chapel, illuminating features she couldn’t see in the dark until the beam of light landed on her. She quickly turned and saw the stark light source but did not see the person holding the flashlight as they moved through the open door and into the chapel.
“Katie Dobbs. What on earth are you doing in here?"
Katie shielded her eyes with her fingers. "Do I know you?"
The man’s low chuckle sounded familiar, but she still couldn't place it.
“I hope so. I've known you and your brother practically my entire life.”
He dropped the flashlight enough so that it wasn't shining in her eyes directly. She squinted her eyes and looked at the man's silhouette period.
“Caleb? Caleb is that you?”
”You were the last person I expected to find in here.”
Caleb came into the chapel fully and made his way over to the pew where Katie was sitting. He looked around for a second, sweeping the flashlight into little corners to make sure that they were alone. Katie had hadn't even thought that someone else could be here. A homeless person maybe. But in Sweet, no one ever stayed homeless for long. With this frigid weather, someone would've to take a vagrant in for the night or take them to one of the bigger cities shelters with the opportunity to help them get on their feet.
Seemingly satisfied, Caleb sat down next to her on the pew.  As he did, Katie felt the pew rock, indicating the fasteners that braced the pew to the floor had come loose. Katie wasn't sure if she was relieved that she was no longer alone or annoyed the Caleb had broken the relative quiet she had been enjoying for the first time in months.
No, that wasn't exactly true. She could have quiet at home.  But now that her parents were snowbirds and her brother was living in New York, she loathed going home because she knew that all the life inside of it was gone. No, it wasn't being alone. It was breaking into her thoughts that told her she’d messed up marrying a cheating man who was now giving a life Katie had dreamed of to another woman.
She chuckled softly and looked down at her hands in shame.
"What's so funny?" Caleb asked.
She shrugged and quickly glanced at Caleb’s expression. He wasn't laughing at her. She wasn't quite sure how to read Caleb. She'd known him practically their entire lives, just as he had said. But she found herself embarrassed to admit the reason she’d come to the chapel, and even more embarrassed she’d been caught wallowing.
"As long as I can remember, this place was falling apart,” she said.  “Do you ever remember a time when people used to come here to actually go to church?"
"My parents were married in this chapel," Caleb said with a smile.
"Yeah?"
He nodded and looked around. "I have some pictures back of the house. My sister and I used to come here on Sundays we were very little but I don't remember much about it. This chapel was too small and when the new church was built, everyone went there. After that, this one was forgotten."
"It wasn’t exactly forgotten. Kids have been coming here on Saturday nights for a very long time.  Probably still do by the look of all those beer cans.”
He pulled off his hat and placed in the pew next to him. When he turned to her, she caught his amused grin with the little bit of direct light illuminating his face from the flashlight.
"Oh, I came here quite a lot in high school."
Katie laughed, and it felt good to actually laugh at something other than her own missteps in life. Yeah, she had laughed at them, too. She laughed at how easy it had been to married the wrong man, and to think her life would be different.
Caleb grinned at her. "Don't give me that look, Katie Dobbs. I'd seen you here too on several occasions."
"I wasn't gonna say anything!”
His expression changed to one of concern. "What you really doing here, Katie?"
"Feeling sorry for myself. How pathetic is that?"
"We all have our moments."
"Mine are becoming a bad habit."
She looked up at the ceiling and couldn't see the great cathedral or the beams that supported the building. It was too dark to make out anything in detail. But she knew there was a hole in the roof, but only because she’d stepped into a pile of snow when she’d walked through the door. It was a pity to think of the damage it had caused inside. The damage to wood beams and wide planks that were probably well over a hundred years old was heartbreaking.
"Can you shine the light on the ceiling?" she asked.
With the lighted flashlight still in his hand, Caleb asked, "What for?"
"If you’re not going to arrest me, then humor me.”
He chuckled low. “Don’t tempt me, Katie. The jury is still out on that one.”