Teaser Tuesday: Her Knight, Her Protector 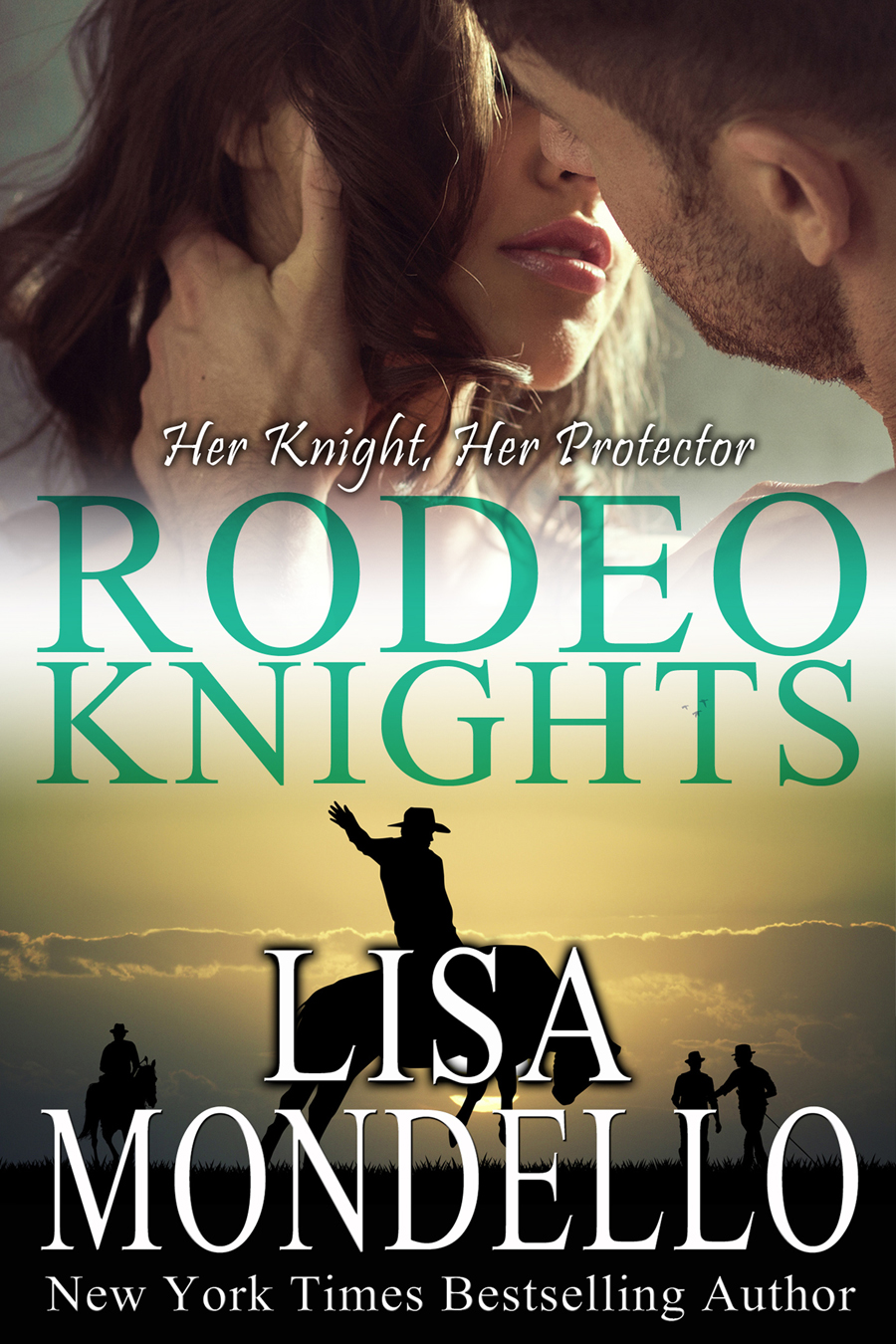 As a former Marine Police Officer and rodeo bull rider, Jesse Knight is no stranger to dangerous situations.  But when animals in the rodeo circuit start mysteriously falling sick and dying, he knows someone is behind the deed and can't just walk away.  Especially when the lovely stock contractor starts receiving death threats.  Jessie had been ready to retire from Rodeo and settle down on small Wyoming ranch, but how can he sit back while defenseless animals are being targeted and a woman he's come to love is in danger?

Carly Duggan doesn't need a cowboy to help her investigate why her beloved stock has suddenly fallen sick and contacting the local police to investigate only led to more trouble and resulted in her getting death threats.  She turns to Jesse Knight, whose training in law enforcement and his knowledge of the rodeo circuit gives him the unique ability to investigate what's happening to her livestock without causing further suspicion.  Although Carly downplays the threats to her life, Jesse knows Carly's life is in danger if she gets too close to the truth.  He insists on being on her shadow to keep her safe.  But Jesse can't possibly keep Carly's heart safe...from falling in love with him?


“What do you mean another one of my bulls is failing?” Carly Duggan bolted from the seat behind her desk so fast the chair practically spilled over and crashed to the floor.  If her ranch manager, Colin Rodgers, hadn’t been standing directly next to her, it would have.

Anger simmered beneath her skin, making her blood run hot as she looked at the young ranch hand standing in the doorway.  Thad Ferrer had been working on her family ranch for just over a year and was only a few years younger than Carly. He was too skinny for his tall frame despite the hard work of being a ranch hand.  But Carly had no complaints about his performance.  He pulled his weight.  The anger she was trying her best to contain wasn’t his fault.

Don’t kill the messenger… She could hear her father saying those very words right now.  It had been over a year since Zebb Duggan had stepped his boots in this office, but Carly could swear she still smelled the tobacco from his pipe as if he were standing over her, judging her next move.

Thad twirled his straw cowboy hat in his hand.  “The bull this week collapsed in the pasture.”

“Does it matter?” Colin asked.

She glared at her ranch manager.  “Thad, which bull?”

“Cotton-Eye.  I think they’re eating something.  But I don’t know what it is.  I checked the feed and it’s clean.  I suppose it could be a virus infecting the herd.”

“A virus?”  Her heart sank deeper than the floorboards.  A virus could race through the ranch and wipe out everything three generations of Duggan’s had built on this Wyoming ranch. “What makes you suggest that?”

Thad glanced at Colin and then at Carly.  “If it’s not the feed and it’s not something he ate, what…what else could it be?  If we don’t do something soon, we’re liable to lose all the ranch’s stock.”

Carly turned her attention to Colin as irritation tumbled forward by leaps.  “How long have you known about this, Colin?”

The elder ranch manager sighed, but didn’t try to hide his guilt.  “A day or two.”

“And I’m just hearing about this now?”

“I didn’t want to cause you alarm unless it was something to be alarmed about.  Sometimes a sick bull is just nothing.”

He gave her a strong look that made her want to shrink where she stood.  But she held her ground.

“And sometimes a bull bounces back from a belly-ache without any fanfare,” he said.

“What was the other bull?”

“Dusty Mule.  But the bull is fine.  It was groaning with a bellyache for a few hours and then grazing like there was never anything wrong.  I didn’t even have to call Doc Cunningham.”

“If you’d been standing next to my father, would you have been so reticent to share this information?”

He lowered his head slightly.  But not enough to hide the slight smile that lifted his lips.  “Well, no—”

“Then I fail to see why you kept it from me.  I decide what is important on this ranch.  Don’t you forget it.”

The smile was gone.  She saw the anger simmering inside Colin, but he kept his temper, most likely because he knew she was right.  He just didn’t want to admit it to Zebb Duggan’s baby girl.

“Look, I’ve spent the last twenty years working with stock.  I’ve seen a sick bull a time or two before.  I’ll give you that it’s strange to have two bulls failing for what seems like unknown reasons.”

“They are unknown reasons.  We haven’t identified the cause.”

Colin sighed.  “I don’t want to be responsible for causing ranches to panic all over the state just because a bull has a bellyache.”

She’d grown up with Colin working for the Duggan Stock Company.  After her father passed away, it had been a struggle to get all the ranch hands acclimated to taking orders from her.  It was clear Colin still saw things that way.  Change was never easy.  It hadn’t been for her.  But she wasn’t going to sit back and let her ranch hands make foolish decisions that ultimately might destroy Duggan Stock Company.

Carly thought of Cotton-Eye, her two year old futurity bull who’d gotten his name because of the prominent round white spot around just one of its eyes.  She saw great potential in that bull.  He had a lot of spirit.  She hated the idea of losing him.

She turned to Thad.  “Call Barry Cunningham.  See if he can get out to the ranch this afternoon.  Get the rest of the hands to move the cattle away from any stock that appears sick.”

“But what about the—”

“I don’t care if it takes all day,” she interjected.   “There is no more important job on this ranch than protecting the healthy stock.  If this is a virus, I don’t want any more bulls to become infected.”

“What is a veterinarian going to do now?  It may be too late,” Colin said.

“And whose fault is that? A few days ago I might have been able to contain something like this a little better.  Now I have to do damage control.  For your sake, let’s hope this bull really does just have a serious bellyache from something it ate.  Either way, I’m not sitting by and watching my stock get sick without a veterinarian checking out all the possibilities.  To be safe, move Dogged Ear and Widow Maker to a separate pasture where they won’t be among the rest of the herd.  I don’t want my prize bull getting sick and losing whatever value it has.”

She grabbed the phone and flipped through her address book, using her finger to scroll down through the names until she found who she wanted.

“Who are you calling now?” Colin asked.

Carly ignored the fact that Colin was questioning her.  She was disappointed in the way he’d handled this situation, but he’d meant no harm.  He was an old fashioned cowboy who still believed a woman could cook on the chuck wagon and be that pretty face to come home to at the end of a hard day’s work on the range.  It was part of his DNA.

As the dialed the number and then waited for the phone to start ringing, she said, “Melanie Summers.”

“The zoologist?  What’s she going to do?”

“She works for the park services in the Grand Tetons.  If there is a virus that is killing animals in Wyoming, she’ll either know about it or want to know about it.”

“I’m glad you remembered that.”

“But I have been working here a long time.  I’ve seen a thing or two over the years.”

She looked over at Colin and felt a pang of guilt as she put the phone back in the cradle before the call connected.  “I know you have.  And I also know that my father regarded you as one of the best, both as a ranch manager…and as a friend.”

Colin’s face softened.  “That’s why I promised him I’d look after you.”

He ignored her response.  “I’m not sure that calling on people to investigate something that might not need investigating is the best way to go.  You know how rumors end up like dry grass fires.  Me, hell even Thad, know this herd better than anyone.  If there is really something wrong, we should be keeping things in house, if you know what I mean.”

She thought about it a few seconds.  “You may be right.”  Sitting down in the leather chair behind the desk that had been her fathers.  A chair that some days felt too big in responsibility as well as size.

“For now,” she said, glancing up at Colin.  “We’ll see what Barry Cunningham has to say.”