EXCERPT MONDAY - Nothing But Trouble 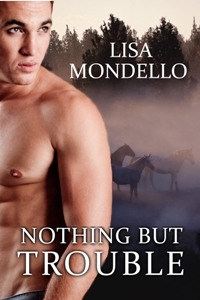 You gotta love a cowboy!  I sure do.  I love writing about cowboys and rodeo and Nothing But Trouble has a sexy bull rider I just couldn't resist writing about.  It also features a spunky heroine who is not going to allow her medical condition to keep her from living the life she wants to lead.  Throw in the beautiful Wind River Mountains of Wyoming and you have a recipe from romance...and disaster!  Well, maybe. You decide.

Most excerpts you see are ones that are taken from the beginning of a book.  I wanted to get you right into the juicy part of the story.  So the excerpt from Nothing But Trouble is from later in the book.  I hope you enjoy it and want to read all about how Stoney Buxton and Melanie Summers make their way through the wildness as they fall in love.

I'm giving away a copy of Nothing But Trouble to one lucky commenter.  So don't be shy.  Leave a comment.  I'd love to hear from you.  Lisa~

Melanie Summers, a feisty zoologist with big dreams, has just made a deal with her father. She has to spend a full month in the Wyoming wilderness and show her father she can handle being in a remote area while managing her Type 1 diabetes before he’ll agree to fund an expedition for her to go to Africa. She knows he’s convinced she’ll fail.

But she’s not about to let any man underestimate what she can do. Especially not the sexy rodeo cowboy she’s hired to help get her through the month in the wilderness.

Stoney Buxton needs to raise cash fast to save the family ranch after a barn fire injuried his father and left the family finances in ruin. Re-entering the rodeo circuit seems like the best way to get the money he needs. That is until Melanie Summers shows up at his ranch flashing easy money. To everyone else, her offer seems like the answer to all his prayers. But one look at her long legs and pouting lips and Stoney know this high society gal is going to be nothing but trouble for his cowboy heart.

Melanie couldn’t help but think of how her hands felt so small in Stoney's larger, more powerful hands. It was if nothing could hurt her if she was with him. She hadn’t expected to feel the way she did. Over the past few days, it had been easy to forget the reason they were here at all. She recalled Stoney’s warning after he’d kissed her the other night. Let’s not forget the reason we’re here.


She had forgotten. She’d fallen in love with the big Wyoming Sky and the Wind River Mountains. Out here, she wasn’t different or special. She could just be herself.

But that wasn’t all, she realized. She’d fallen in love with Stoney. Somehow he’d crept into her heart when she wasn’t looking and claimed it for his own. When she was with him, she felt whole. It was something she’d never known before.

“Let's get some sleep,” he finally said.

The burden of tears weighed heavy behind her eyelids and she bit her bottom lip to keep it from trembling. She held his hand tight. It was now or never. She couldn’t keep this secret from him any longer.

“Tell me what is wrong,” he said, looking at her for the first time with concern.

Melanie drew in a deep breath and worried her bottom lip.

“You’re not having second thoughts about last night, are you?”

He shook his head, but his worried look remained. Bending his head, he kissed her forehead. “Never.” He finally gave her a half grin. “Now that we've settled that, why don't we crawl into those sleeping bags and generate a little heat.”

He tossed her a deep-dimpled grin. It was that sexy happy-go-lucky grin that drove her crazy so often.

“I need to tell you something.” She felt the weight of her predicament on her shoulders. She took a deep breath and stared at him, trying to push the words past her fear. “I’m in trouble, Stoney.”

He searched her expression. She saw a thousand emotions pass through his features before she finally saw bewilderment.

She continued. “We have to go back. Right now.”

He stood up straight, his eyebrows knitting together. “No, you’re doing great. Look at the way you crossed that river without any help from me. Before we started, I thought you couldn’t hack it, but I have to admit you’re doing better than I thought a pretty little city gal would do out here. Give yourself some credit.”

Her heart ached with his compliment, however left-handed. She’d deceived him, and now that deception was coming back to haunt her. He assumed she was having doubts about her ability to make it the whole month. After all they’d been through these past couple of days, he believed in her.

She should have told him about her diabetes. She knew that now. He had a right to know. But hindsight was a luxury she hadn’t put faith in.

Order NOTHING BUT TROULBE from these online retailers...

For more books by Lisa Mondello, click on the carousel of books at the top of the page.