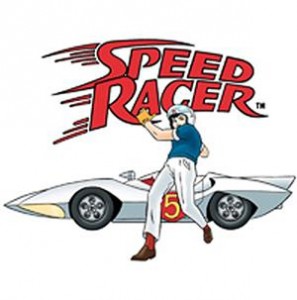 I admit it.  The very first boy I ever had a crush on was Speed Racer.  I thought he was the ultimate in romance heroes.  I wanted to marry him from the moment I set eyes on him. Love at first sight.

Okay, so I was 4 at the time.  And aside from the obvious conflict of marrying an animated figure (unless you live in an A-ha video - Anyone born after 1978 click this link http://tinyurl.com/27998or)  Speed Racer definitely had it all.  There was the car, of course.  The Mach 5 is definitely cool!  Helps when your drive is cool.  I may have been pre-kindergarten age at the time but I definitely noticed the car before the boy.  Then there was the hot older brother, Racer X, a.k.a. Rex Racer, the tall, dark and mysterious racer who always looked out for Speed.

More than that, Speed was a guy with passion.  He loved what he did, got himself into terrifying situations and always got himself out.  Let's face it, he would definitely be cool to hang around with too.  He was always off on some adventure somewhere around the globe.  Tell me you wouldn't want to tag along for a little bit of that fun?  I would!

When I was 21 and living in Boston one of the TV channels started showing reruns of Speed Racer.  It brought me back to when I was a kid and had this collosal crush on Speed.  I ended up being late for work as I watched The Mammouth Car episode.  After that I decided to grow up and let go of my Speed Racer crush.  (It was around that time I moved on to cowboys.  But that's another post.)

I know Speed Racer has been remade into a movie.  But I've never seen it and never will.   (Perish the thought!  Some things you just don't mess with!) But there is definitely a lesson to be learned in why Speed Racer has held a place in my heart all these years.  Whether it was the car, the adventure or the guy, I still think Speed is really cool!
Posted by Lisa Mondello at 2:05 PM