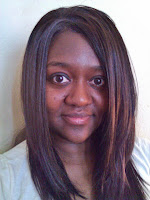 Shewanda Pugh is a native of Boston’s inner city, though she now calls sunny Miami, Florida home. She has a bachelor’s degree in Political Science from Alabama A&M University and a Master’s in Writing from Nova Southeastern University. Fueled from a young age, her passion for crossing societal boundaries like race, class and culture, is the inspiration for both her cluttered bookshelf and her writing. When she’s not busy obsessing over fiction, she can be found traveling, nursing her social networking addiction or enjoying the company of loved ones.

Get to Know Shewanda:
1. What’s unique about Crimson Footprints?
A few things. For starters, I’ve paired a biracial African American girl with a Japanese American guy for a passionate romance. They connect on a multitude of emotional and physical levels, and you as the reader, have the opportunity to see that unfold. Second, I offer the “real” Miami as a setting, the contrary Miami where the richest and poorest of Americans all live in the same glamorous city. Third, both hero and heroine, Tak and Deena, are unique individuals that jump off the page and into the heart. In other words, they’re really real.
2. Why interracial romance?
I have a thing for cultural boundaries. Interracial romance is only one aspect of that. There are also economic and/or religious boundaries, too. You get to see that in Crimson Footprints, too.
3. What part of Crimson Footprints did you most enjoy writing or creating?
The romance between Tak and Deena, two contrary figures who didn’t appear to belong together, but fit together perfectly nonetheless. I also enjoyed fleshing out Deena’s career and making it a total reflection of her character, beliefs, and hardships. There is symbolism in her work as an architect, and that was something I enjoyed exploring.
4. What makes a good story?
Well-developed characters with motivations both big and small, old fashioned plot development, a climax that makes sense, and a satisfying ending. Throw in a cliffhanger or two and you’re working with something blockbuster.
5. Who are your literary heroes?
Zora Neale Hurston, first and foremost. Toni Morrison and Amy Tan second.
6. What are you reading now?
Right now I’m in love with all things even remotely YA dystopian romance. In the last few weeks I’ve read the Hunger Games Trilogy, Divergent, Insurgent, and a ton of other stuff. I’m reading Matched by Allie Condie, but by the time you read this, I’ll be done with that and on to something else.
7. What’s next in the writing realm?
I have tons of stuff in the works. The sequel to Crimson Footprints will release with Delphine Publications in a few months. Right now I’m working on a genealogical history of my family. After that, I plan on releasing a six book series about an African American girl and Asian Indian guy whose families are the best of friends until they fall in love. Expect sparks!

Synopsis: When an insecure, bi-racial woman begins a cloak-and-dagger love affair with a Japanese American man, she is intent on keeping her bigoted family in the dark—albeit with devastating consequences. On the night of her brother’s murder, Deena Hammond stumbles upon Takumi Tanaka, lost and on the wrong end of a .32. After rescuing him from the certain fate driving through the hood in a Porsche will bring, a sweet kind of friendship begins. A balm for her grief. Maybe, Deena likes to think, it happened the day her white mother killed her black father. Or maybe, it was always a part of them, like DNA gone bad. Whatever the case, Deena knows that her family would never approve, hell, never acknowledge her fast-growing love for Takumi. And had he never made love to her that way, in that unraveling, soul-searching sort of way, she could’ve done the same. But love’s a devil that way. So, their game begins. One where they hide what they are from everyone. Anyone. And Tak understands this—for now. After all, Deena’s career hinges on the favor of her mentor and boss, his hard-ass of a father. And the Hammond family is already stretched thin with grief. Yet, each step Deena takes toward family and career brings her closer to an acceptance she’s never had. And away from him.
Web-Links:
www.shewandapugh.com
https://www.facebook.com/Author.ShewandaPugh
http://shewandapugh.blogspot.com/
https://twitter.com/ShewandaP
Shewanda@hotmail.com
http://www.amazon.com/Crimson-Footprints-ebook/dp/B00885VJ9A/ref=tmm_kin_title_0?ie=UTF8&m=AG56TWVU5XWC2
http://www.barnesandnoble.com/w/crimson-footprints-shewanda-pugh/1100631063?ean=2940014715812