Please welcome author, Linda Acaster to Conversations today! She's here to talk about her Historical Romance novel, Beneath the Shining Mountains. Be sure and check out her excerpt too!

BENEATH THE SHINING MOUNTAINS 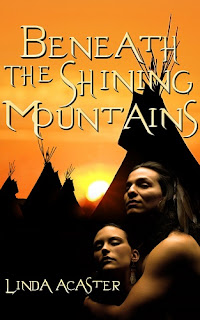 Moon Hawk is playing a dangerous game. Her heart is set on Winter Man, but why would a man with so many lovers want to take a wife? Challenging his virility captures Winter Man’s attention, but in a village of skin tipis where every word is overheard their escalating game of tease and spar soon spirals beyond control, threatening Moon Hawk and her family with ridicule and shame. Is this Winter Man’s intention? Or are they both dancing to another's tune?

Set on the northern plains among the Apsaroke/Crow people before ‘the hairy-faced traders’ turn into a flood of émigrés, the novel explores male as well as female expectations of life, from buffalo hunting to horse raiding, to honour among rival warrior societies, and one woman's determination to wed the man of her dreams.

THE STORY BEHIND THE STORY
It’s often a source of confusion, and sometimes amusement, that a British author writes about Native American life in the 1830s. What can I say? Us Brits are nothing if not eccentric.

The interest started before I was school age. My mother used to tell anyone who would listen that when she was lying-in after giving birth to my brother she cut a war bonnet out of newspaper to keep me occupied – which made me about four and prior to the family owning a television set. So how did I know these people existed? My parents couldn’t fathom it, but by the age of eight neighbours knew enough to keep an eye open at church bazaars, and this is how my book collection started.

Books, I soon realised, left me with more questions than they answered, and learning about bibliographies was a revelation to my young mind. While my parents were keen to steer me into the children’s library to look at ‘A Day In The Life Of…’ picture books, I wanted to see the sorts of tomes that would need to be ordered from the regional holding library, if not from the British Library in London. “She’ll grow out of it,” they said. Of course, I didn’t. As I entered my teens I just got worse.

Reading about turned into how-to… make moccasins (from an old leather coat), make a bone whistle (family chicken dinner), tan hide (rabbit from the butcher – my mother was horrified), and when I found a book on tipi construction summer camping in the garden took on a whole new meaning.

Boyfriends only marginally interrupted the interest, and when one not only didn’t laugh but actually showed an interest, I married him! Between us, over the next few years, we kept afloat both the international parcel services and American university presses. At last count the books, journals, academic papers and biographies numbered just over a thousand. If we ever had a fire I’m not sure what I would save. It certainly it wouldn’t be the family photos.

I’ve always been a writer, and despite British publishers telling me that ‘no one is interested in Native Americans’ Beneath The Shining Mountains sold 30,000 copies in its first paperback incarnation, despite it never been published in the USA. So it’s a delight to see it continuing to sell well, especially in the USA, now I can offer it under its true title as a paperback and ebook. Enjoy!

The hunters drew their mounts to a standstill and watched the antics of their more youthful cousins with a mixture of amusement and disdain. Men who had counted coup did not begrime their prestige by entering into such games, but they all remembered when they had.
Moon Hawk had eyes only for Winter Man. He flanked the group, a mercy she gave thanks to First Maker for. She’d no idea what she would have done if he’d been surrounded by his friends. Despite being away from the village for more than four days, his raven-black hair was as immaculately dressed as ever she had seen it, its length almost touching his horse’s rump, the quiff above his brow erect and whitened as if a swan’s tail. No shirt stopped the sun from shining on this bronzed skin, and only a looped necklace of tiny bone discs adorned his chest. Just looking at him brought a thrill of expectation.
Putting such thoughts from her mind, she drew a determined breath. If she didn’t act now… Pulling back her arm she threw her chosen missile with accuracy. A small, shrivelled turnip caught Winter Man full on the base of the neck. Such a well-balanced rider needed more to unhorse him, but the blow made him lurch to such an extent that his mount shied. Regaining control, he swung round on his attacker, astonishment sharpening his high cheekbones and widening his eyes.
‘Did you throw that?’
Moon Hawk swallowed her fear and lifted her chin. ‘I didn’t mean to hit you,’ she said. ‘My throw was wild.’
‘Wild? No woman’s throw can be that wild!’
Moon Hawk flashed her eyes at him to give her words more vehemence. ‘I slipped,’ she said. ‘Do you think I would waste a hit on you?’
She glanced across to the young people disporting themselves in the sunshine. As she knew he would, Winter Man followed her gaze. She looked back at him in time to see his face registering utter disbelief that any young woman would prefer someone of no account to him.
‘I am Winter Man!’ he bellowed. ‘I am a Good Young Man.’
Moon Hawk gave a casual shrug of her shoulders. ‘I know that.’
Her reply seemed to cut him to the heart. As rehearsed, she took a step towards her friends.
‘Ha!’ Winter Man spat after her. ‘Your lover seems to have deserted you. No boy waits for you that I can see.’
Moon Hawk’s heart sang. He’d drawn on the bait as her mother said he would. She swallowed her smile of excitement and turned back to him with a look of disdain.
‘Lover? I have no lover! I am chaste. There’s not a man alive who can entice me.’ 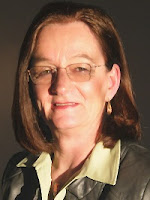 Linda Acaster is the author of five novels, over 70 short stories and a non-fiction guide to writing short fiction. She is currently working on the second in the paranormal ‘Torc of Moonlight’ trilogy set in her home county of Yorkshire, but vacations among the vast skies and rolling landscapes of the North American plains.

Beneath The Shining Mountains is available in both paperback and ebook: