Please welcome New York Times & USA Today Bestselling Author Ciji Ware. Ciji's here to talk about her latest contemporary romance novel, That Autumn in Edinburgh. So be sure and check out the blurb and cover below, and she has a great interview for us too!

That Autumn in Edinburgh 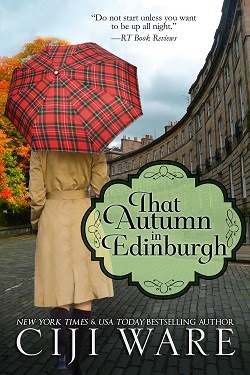 Can memories of a tragic, eighteenth century love triangle be passed down through a descendant’s DNA?

When Fiona’s mercurial boss dispatches her to Edinburgh to create a Scottish Home Furnishings Collection, the chemistry deepens as she and Alex discover their ancestral bonds to the star-crossed lovers Thomas Fraser—the “Lost Lieutenant”—and Jane Maxwell, the flamboyant 4th Duchess of Gordon who died in 1812.

From the cobbled streets of Edinburgh’s Royal Mile to the tartan and cashmere mills of the Scottish border country, the modern lovers grapple with the imminent threat of financial ruin to their respective firms, along with ancient wounds echoing down through time—and a heartbreaking mystery, hidden for more than two centuries, that will dictate their own destinies…

“…[A] story so fascinating that it should come with a warning—do not start unless you want to be up all night!”—Romantic Times


An Interview with Ciji Ware

Your newest novel is a stand-alone, contemporary spin-off of your best known 18th c historical, and begins 250 years after the first novel ends.  How did that evolve?

The idea for many a novel comes from asking the question “what if?” In the case of That Autumn in Edinburgh, the question “What if humans possess a genetic memory sequence in their DNA that echoes throughout their lives?" And further: And "What if the specific memories of a tragic, eighteenth century love triangle were passed down through a descendant's DNA?”

These questions were quickly followed by another, prompted by a novel, Island of the Swans, that I wrote twenty-five years ago: “Whatever happened— after the book ended— to the historical 4th Duchess of Gordon and her lover, who came to be known as ‘The Lost Lieutenant?’”

The “Whatever happened to Jane and Thomas?” question has been asked of me for years by readers the world over. Eventually, all these queries came together when I decided to reveal what I’d known about those star-crossed lovers all along, but as a storyteller, had made the editorial decision to end Island of the Swans at a point in the lives of these historical figures when they achieved what they yearned for: to live together as if they were man and wife—if only for a summer.

Sadly, their true-to-life end was too tragic for a reader to bear who had followed the saga of these characters’ lives fn the original novel for nearly 600 pages, and so I ended the story at a moment when they could (finally) be together—but with an uncertain future. This conclusion was akin to the ending of Gone with the Wind when Rhett Butler walks out of Scarlett O’Hara’s life and everyone wondered, “Will they ever get back together?”  I figured the best way to reveal the genuine end of the story of Jane and Thomas was through the lens of modern day descendants trying, as so many of us do, to "find our roots."

So the main characters in your new novel are the descendants--many generations down the line--of Jane Maxwell and the "Lost Lieutenant" Thomas Fraser?

Yes, exactly! Readers do not need to have read the original historical to understand and enjoy the new book.  What I did was create a sort of "Dateline:  250 years later, we find Alex and Fiona …"  The hero of That Autumn in Edinburgh, Alexander Maxwell, is a fictional, male descendant of the Jane Maxwell, the 4th Duchess of Gordon (who died in 1812) . The heroine of the new book is Fiona Fraser, an American, fictional, female descendant of the "Lost Lieutenant" Thomas Fraser, the duchess's star-crossed lover in Island of the Swans.  Answering these questions turned out to be a marvelous adventure, since the lore in my family--perpetuated by my great grandmother, Elfie McCullough (whom I knew and who lived to be 97)--was the claim that we McCulloughs descended from Jane Maxwell “back in the mists of time.” After years of research, I could never prove that fact beyond a reasonable doubt, but the journey introduced me to my Scottish-American heritage and greatly informed that earlier novel, as well as That Autumn in Edinburgh.

And what were the modern themes in the new book that you felt were important to portray?

I wanted to bring to life modern-day Scotland with all its beauty and complexity and weave truth and imagination into a believable whole so that the reader is swept away by the romance of it all, but still is exposed to the way the inheritors of this rich culture must grapple with modern-day problems and challenges.  In the new book, a compelling, almost mystical attraction draws American designer Fiona Fraser into the force field of visiting Scotsman, Alexander Maxwell, through an eerie happenstance one steamy summer's day in New York City. When Fiona's mercurial boss dispatches her to Edinburgh to create a Scottish Home Furnishing Collection, the chemistry deepens as she and Alex discover their ancestral bonds to the star-crossed lovers of centuries past.  The modern lovers grapple with the imminent threat of financial ruin to Alex's tartan mill and Fiona's family furniture manufacturing firm in North Carolina--all based on true-to-life crises that are actually facing these kinds of enterprises from the threats from slave labor operations in the Far East that undercut their products with cheap imitations.

Then, this is the weaving of "fact with fiction" you mentioned earlier?

I was a print and on-air journalist for more than twenty years and bring a particular skill-set to the way I research and write a novel, and those "best practices" really helped me in doing this particular novel.  I learned a lot about the weaving of tartan and plaid, and how home design goes from an idea in a designer's head to a product on the shelf of Bed, Bath & Beyond!

In a sense the book is “the story of the story” --isn't it?  You use the modern characters to trace the life of an historical figure and the great, lost love of her life?

All the scenes of Alex and Fiona seeking an understanding of their ancestors’ lives after 1797 and until the deaths of Jane and Thomas are based on my own research into documents that go far in establishing what really happened to the pair in their later years.  In the process, the modern lovers discover ancient wounds echoing down through time in the form of family issues in their current lives and come fact-to-face with a heartbreaking mystery, hidden for more than two centuries, that will dictate their own destinies.  In fact, at one point, Alex says, "This is becoming a love story of the ages," and to me, it is!

Don't you think we all wonder how much of our ancestors is "in" us?

Exactly right, and that's what drives this story.  I think this novel speaks to all of us who wonder about the ways in which those who came before us create--or at least subtly influence-- our own realities today?  I hope readers find themselves thinking about their own family trees as a result of "journeying"to Scotland--old and new--on the  coattails of Alex and Fiona ...whom I grew to love very much! 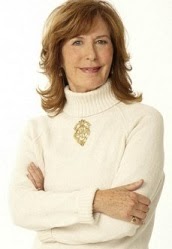 Ciji Ware is the daughter, niece, and grand-daughter of writers, so authoring novels is just part of the "Ware family business" An Emmy-award winning television producer, on-air broadcaster, print and online journalist, she has published two nonfiction works and eight novels, several that are national bestsellers.  Her fiction has won the Dorothy Parker Award of Excellence, a Golden Quill, and Best Biographical HIstorical Novel Award from Romantic Times magazine. Her most recent historical novel, A Race to Splendor, was short-listed for the prestigious WILLA (Cather) Literary Award in 2012. A graduate of Harvard University in history, Ware is the first woman graduate of Harvard College to serve as president of the Harvard Alumni Association/Worldwide. She lives in the San Francisco Bay Area.