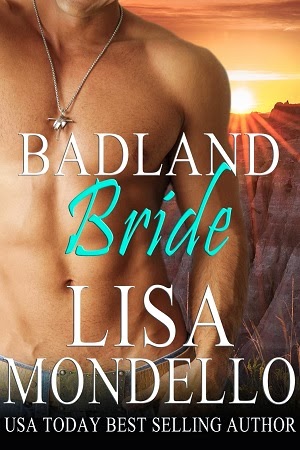 She'd spent a lifetime packing armor around her heart...

Raised an Army brat, Regis Simpson was used to calling new towns home, learning to quickly make friends but never letting anyone get too close. When devastating floods tear through the Badlands of South Dakota, she thinks Rudolph is just another town that needs to be rebuilt. Nothing more. The sooner she gets her work done, the sooner the people of Rudolph can heal and she can move on to the next town in need. She never counted on the sexy town doctor, Keith "Hawk" McKinnon or his determination to break down walls she'd spent a lifetime building, making it impossible for her to leave.

He's determined to break down her walls and give her a reason to stay...

Nothing pained Hawk McKinnon more than seeing people he'd known his whole life hurting. He traded a high-paying salary at a city hospital to come back to Rudolph and make a difference where he'd dug his roots. When the beautiful Regis Simpson comes to town offering help, he's immediately drawn to her even though she's spent a lifetime believing that everyone she loves leaves. Now she does the leaving and once her work is done, she'll be leaving again. He's determined to do everything possible to make her stay.

After easing herself out of the car, Regis limped up the newly built wooden ramp, unpainted and still sporting the color of wood that hadn’t been exposed to the elements for long. She winced through the pain as she took each step toward the front door. A small sign hung next to the door giving the clinic's hours. She tried the door and it wouldn’t budge. Her shoulders sagged in defeat.
“What does he do in the middle of the day? Go fishing?”
“Nope, house calls.”
Regis swung around to see a tall man walking up behind her on the ramp. He had the Irish blue eyes she’d seen on many models in advertising magazines she’d bought when she was a teenager, and the dark hair that looked a little unruly in the wind, but seemed to fit him perfectly. The light scuff of a beard wasn’t more than a day old, but already dark and covering his square jaw.
For a moment, Regis was so taken with this handsome stranger that she’d forgotten why she was there.

“Dr. Hawk, or whatever his name actually is, does house calls? I thought that sort of thing went extinct with the dinosaurs. The guy must be a hundred years old.”
Hawk fought to keep from smiling.  “There are days it seems that way.”  He then looked at the woman’s leg, and frowned as he saw the blood staining her pants. “We’d better get you inside so that can be cleaned.”
“The door’s locked,” the woman said, leaning against the rail as he came up beside her.  Her face was pale, most probably due to the pain she was experiencing and the loss of blood.
He smiled, looking down into her eyes. “Luckily, I have a key.”  They were pretty brown eyes, he decided.  No, they were hazel. And the fact that he didn’t want her to turn away so he could know for sure surprised him.
Standing six feet tall, he towered over her small frame, although he was probably no more than eight inches taller than her.  And she smelled like fresh soap as if she’d just taken a shower. But looking at the dirt and blood on her hands, that probably wasn’t the case.
“You must rate to have your own key to the doctor’s office. When does this Hawk doctor usually come back?”
He slipped the key into the door and turned the handle. Then he smiled as he pushed the door open and held it for her to come inside. “Why don’t you have a seat here. It’ll just be a minute.”
Hawk curled his fingers around the woman’s upper arm gently and helped guide her to the chair. As she sat down, a look of relief washed over her face.
“Does that take some pressure off?”
“What?”
“Your leg. Does sitting help?”
As he waited for her to reply, he walked behind the receptionist desk and sifted through the wall organizer that was filled with insurance forms. Nancy was going to have a fit if he had this woman fill out the wrong one.
“Ah, a little.”
He felt a muscle pull between his eyebrow as he glanced at the forms. For all his higher education, insurance forms were a mystery to him. Finally he sighed and dropped the papers on the desk.
“I’m going to need you to fill out some forms, but I’m not sure which one's right at the moment and my receptionist, Nancy, will have my hide if I have you fill out the wrong form. So why don’t we just have a look at your leg first and fill out paperwork later?”
“Your receptionist?”
“Yes. She’ll probably be back from lunch before I’m done.”
“You? Wait, you’re Dr. Hawk?”
His lips curled up just slightly. “It’s just Hawk. But if you prefer, you can call me Dr. McKinnon.”
Her mouth hung open just slightly. “Oh, I’m…oh, okay.”
“Did someone tell you I was a deranged killer?”
“What? No, of course not, it’s just…”
She was adorable, all flustered with her flub. Hawk couldn’t resist teasing her. “They said I was a mean old bastard who was going to cut off your leg?”
She rolled her eyes. “Don’t be ridiculous.”
“Then what?”
“You aren’t…I wasn’t expecting someone so…”  She took a deep breath.
“So…handsome?”
Color immediately stained her pale cheeks. “Young. You look like you just graduated college.”
He chuckled. “So they didn’t tell you I was good looking. They told you I was old.”
She sighed heavily. “No. Mr. Bennett didn’t say anything except your name is Hawk. What kind of person walks around with a name like that anyway?”
“Me,” he said. “And I can assure you that you are in good hands. I may not be a crusty old doctor, but I not only went to college, I made it all the way through med school, my internship and a stint at the city hospital in Sioux Falls before coming back to Rudolph and starting my practice here.”
Her shoulders slumped. “I didn’t mean to imply—”
“Let’s get you cleaned up,” he said. “Let me help you—”
He bent down to help her to her feet, and he caught a whiff of her soapy scent again. Normally he didn’t notice such things. But he was having a hard time not noticing every little detail about this woman from the slight hook of her nose to the patch of too many freckles on her left cheek.
“No, I can do it.”
“Okay, follow me,” he said as they made their way down the hall to the first examining room. He opened the door and let her into the well-stocked room first. Then he carefully helped her to climb onto the examining table before going to the sink to wash his hands. When he was done, he put on a white medical jacket that was hanging from a hook on the door, and then turned to her.
“Now that you know my name, why don’t you tell me yours?”
“Regis Simpson. But people call me Reggie.”
“Why?”
“Why what?”
“Why would people call you Reggie when Regis is such a pretty name?”
Her lips lifted to a sideward grin. “You’ve got one hell of a bedside manner, Doctor.”
“Did it make you forget the throbbing in your leg?”
She thought a second and then chuckled softly. “That’s not why you said that to me.”
“Are you sure about that?”