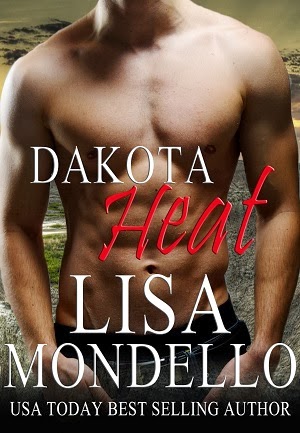 Hotshot Sam McKinnon was always leaving town, chasing another fire until his own hometown became vulnerable during the fire season after a devastating winter flood left debris and destruction in its path. He didn't expect out of town dispatcher, Summer Bigelow, to catch his eye or his heart.

It hadn't been Summer's idea to move from Providence to South Dakota, but when a serial murderer suddenly turns his attention on Summer, her boss insists she leave town...at least until the heat dies down. She's dealt with high tension, life or death situations many times in her job. It isn’t until she meets Sam McKinnon and falls for the sexy Hotshot that she really begins to know fear. The fear of losing someone she loves.

The girl was new.  Sam walked around the Interagency Fire Crew basecamp with familiarity.  He saw faces he recognized from working in different locations over the past few years.  But the girl…  Yeah, she was new.  He doubted he would forget the soft blond color of her hair or the slight tilt of her head as she read through paperwork, pretending she didn’t notice the people around her.
He grabbed two water bottles from the bucket full of ice in the back of the Quonset hut and walked toward her.  She didn’t look up until he held the water bottle in front of her.
Blue eyes met his with a mixture of irritation and surprise.
“You’re dropping ice pieces on my paperwork,” she said.
He noticed the smooth as silk sound of her voice before the water splatter on the top page of her paperwork.  He immediately pulled the water bottle back a few inches.
“Sorry.  I thought you might like something to drink.”
Her face softened as quickly as it had shown irritation.  She reached her hand out and took the water bottle, and then placed it on the bench next to her before shaking her hand of the residual moisture the bottle left behind. “Thank you.”
“You’re new here,” he said as he sat down next to her.
Not looking up, she said, “So are you.”
She smelled like soap and lavender.  After breathing in smoke and dirt for so long, it was refreshing to breathe in the sweet scents of a woman.
“Not exactly.  I grew up in Rudolph.”
That earned him a lingering second glance.  One that afforded him a few seconds to really look into her eyes, at her face.
“Really?”
“My whole life.”
She glanced around quickly.  “When I got in last night I was told the basecamp here was new this year.  I didn’t realize South Dakota had a dedicated fire basecamp.”
Sam had never worked fire duty in his home state before.  And he’d never come to a new location and been so familiar with faces as well as the location.  His reason for wanting to come back to South Dakota this year was personal.
A lot of his friends who worked with the Interagency Fire Crew were still reeling after the deaths of nineteen Hotshot firemen in Arizona last summer.  Some had quit fighting fires altogether at the urging of their family.  Sam’s own mother had tried her best to do the same during many phone calls since the tragedy, but Kate McKinnon settled for having him come home to Rudolph to work.
“This was just constructed this year.  The Black Hills are a hot spot this year because of all the flood and ice damage that occurred over the winter.  When I found out they were setting up a base here to do fire control for the season, I put in a request to work here.”
She nodded.  “Must be nice to be home.  At least for the season.”
She glanced down at her paperwork again.
He chuckled at how quickly she fell into her reading again.  “You’re looking at that like you’re cramming for a final exam.”
She shrugged.  “I feel I am.  This is my first season working fire dispatch anywhere.”
“Ah, then that explains it.”
“Must feel good to be home after—”
“Summer?”
Both Sam and the girl looked up to see the chief calling out from across the tent.  The girl quickly collected her paperwork and stuffed it in a folder.
“Be right there,” she called out.  She turned to Sam, lifting the bottled water in her hand.  “Thanks for the water.”
“No problem.”
But she was already trotting over to the superintendent’s office.  He hadn’t even had a chance to get her name.  But he would before the day was done.  This was one woman he had a feeling he wanted to get to know.