Please welcome the award-winning author Amanda DeWees to Conversations today! Amanda is here to talk about her new release, With This Curse. So be sure and check out the blurb, cover, and her "Story Behind the Story" below! 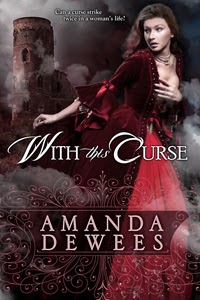 In 1873 Cornwall, seamstress Clara Crofton gets a second chance at happiness... and peril. Eighteen years ago, the curse on Gravesend Hall killed the young man she loved and forced her into a hostile world alone. Now she has the chance to return to Gravesend as the bride of the heir, Atticus Blackwood. But is the curse finished with Clara—or does it pose an even greater danger than before?


With This Curse: The Story Behind the Story

As a reader, I’ve always been crazy about gothic romances—the combination of love story, escapism, mystery, and a whiff of supernatural danger—and I love writing them as well. The tricky thing is that the gothic conventions have been so firmly established that it’s difficult to come up with a fresh approach to the genre... at least, one that plays fair and doesn’t leave readers feeling like they’ve experienced a bait-and-switch.
In With This Curse, my solution was to swap the usual roles of hero and heroine. Traditionally, the gothic hero is emotionally damaged and as a consequence moody and difficult to get close to, while the heroine’s innocence and loving heart eventually bring him out of his personal darkness into a place where he can trust and love again. In my story, the dynamic is almost entirely reversed. Clara, the heroine, had her heart broken and her life overturned at a young age, and her struggles as a woman alone in Victorian England have made her prickly, guarded, and definitely suspicious of the hero, Atticus. For his part, Atticus is initially the more optimistic, open-hearted, and vulnerable of the two—so when a shocking event brings about a drastic change in his temperament, Clara is determined to unearth the reason for his transformation.
I also delighted in bringing some humor into the gothic formula. As much as I adore the foreboding spookiness of gothic atmosphere, an unbroken diet of it can begin to wear on the reader (or author). Clara has a sense of humor, albeit a dry one, but it takes her some time to relax enough in Atticus’s presence to let it show. Take the scene where they discuss his proposal of marriage:

“...That’s another difficulty,” I said. “My past. We can scarcely acknowledge that I was a servant for your family, nor that I have been earning my keep as a seamstress with a traveling theatrical troupe.”
“A widow who traveled a great deal with her American husband,” he said promptly, making me wonder how much thought he had already given the matter. “A railway magnate, shall we say? They seem to proliferate in America. Apparently one can scarcely take two steps down any major thoroughfare without colliding with a captain of industry. They are a bigger nuisance than pigeons, I hear.”
I laughed before I could help myself, and his cup paused on its way to his lips.
“Your whole demeanor changes when you laugh,” he said thoughtfully. “I should like to see you smile more often… by which I mean at all.”
Discomfited, I stared down at my lap. “One certain way to prevent my doing so is to make me self-conscious about it.”

One of the fun things about Clara and Atlas’s odd-couple relationship is the humor that arises when Atticus’s warmth and enthusiasm crash up against Clara’s wariness. From later in the same scene:

“I do accept the offer,” I said. “It is only that—”
“I’m delighted to hear it.” The smile struck again, and I blinked; he seemed genuinely pleased, but why I could not fathom. “You have made me the happiest of men, my dear Clara. I may call you Clara?”
“I suppose, if you must. But—”
“Thank you, Clara.”
“You are welcome. But—”
“I hope you’ll call me Atticus.”
“If you insist. But,” I repeated, “it would be foolish not to examine every area where my imposture may be exposed.”
He considered this as he helped himself to more bread and butter. His appetite seemed to be improving now that he had his answer. I, on the other hand, felt some queasiness now that I had committed myself. “A very sensible attitude,” he declared. “I’m doubly fortunate in having won a wife as intelligent as she is lovely.”
I gave him an even look. “Do you have many such pretty compliments memorized for this occasion, or shall I be spared further sallies?”

Naturally it wouldn’t be a proper gothic without plenty of chills, portents, and emotional angst for my protagonists, and those aren’t lacking in With This Curse. My hope is that the combination of traditional, beloved gothic elements and new twists on the formula will reawaken readers’ love for this classic romance subgenre. 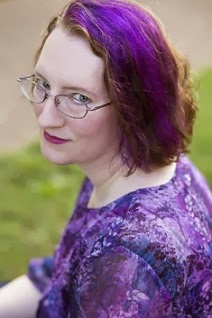 Amanda DeWees received her PhD in English literature from the University of Georgia and likes to startle people by announcing that her dissertation topic was vampire literature. Amanda's books include the widely praised historical gothic romance Sea of Secrets, winner of the 2012 RONE award in mystery, and the Ash Grove Chronicles, a captivating young adult "paranormal lite" romance series set in modern-day North Carolina. Besides writing, Amanda's passions include theater, classic film, Ioan Gruffudd, costume design, and the preservation of apostrophes in their natural habitat. Visit her at www.amandadewees.com for book extras and other delightful diversions.