Please join me in welcoming multi-talented author Darlene Gardner to Conversations today! Darlene is here to talk about her paranormal mystery serial for young adults on up, Dead Ringers: Volumes 1-3! So be sure and check out the cover, blurb and excerpt below! And right now, the boxed set is FREE! Totally FREE. No cost. At all. Plus, Darlene has a great post to share with us about being cursed by a psychic! Thank you Darlene!


Cursed by a Psychic - by Darlene Gardner

I was once cursed by a psychic. A really cranky psychic. She flung negative energy my way, wishing me enduring unhappiness.

My offense? I agreed to give a co-worker my opinion about whether she was legit before he agreed to write a feature story about her. At the time, we both worked for a daily newspaper in South Carolina.

I walked into the psychic’s dark, incense-filled room at one of the happiest times of my life. I was in love, living in beautiful Charleston and had just notched a playoff win for an adult-league tennis team. I was even still sweating lightly and dressed in my tennis clothes.

The psychic told me I was deeply troubled. She said the only way things would turn around was if she lit candles for me. And, oh yeah. The candle lighting would cost another $100.

I didn’t pay to have flames burn away my troubles, and my co-worker didn’t write the story. When she found out why I had entered her psychic lair, she became livid and put a curse on me.

I didn’t shake in my tennis shoes. I didn’t beg her to reconsider. I didn’t even lose any sleep.

Because the curse thrilled me, probably because authors are wired different than other people. Everything, and I mean absolutely everything, is fodder for a book.

I wasn’t even writing fiction full time yet, but I knew that some day I’d write a book where I’d call upon that experience. And now I have. Psychics play prominently in Dead Ringers, my paranormal mystery serial. One psychic even gives readings.

A slew of other mysterious things are going on in Dead Ringers, not the least of which is body switching. But the memory of the psychic who issued that long-ago curse is what spurred me to write the book. Speaking of the curse, you’re probably wondering if it worked.

Uh, no. Not unless curses kick in after more than twenty years of a happy life.

If you want to help me keep fighting the curse, download a copy of the first Dead Ringers boxed set. Dead Ringers: Volumes 1-3 is FREE wherever eBooks are sold. 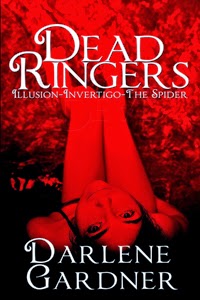 A paranormal mystery serial for young adults on up. All nine 25,000-word volumes now available individually and in boxed sets!

Dead Ringers 1: ILLUSION
Jade Greene's memories of the two days she went missing are slowly returning, but they involve a blinding headache and an evil clown with a syringe. Not exactly the stuff of sanity.

Dead Ringers 2: INVERTIGO
Max Harper insists Jade's best chance to find out why she remembers so little of her abduction is to team up with him. But can she trust him?

Dead Ringers 3: THE SPIDER
Someone in Midway Beach isn't who they seem and unless Jade and Max can figure out what's going on, they could become the next victims.

CHAPTER ONE
Four months ago

When the police find me, I’m stumbling out of a deserted carnival. The place is boarded up for the season, awaiting the fresh swarms of tourists who descend on Midway Beach every summer like Alfred Hitchcock’s birds.

I trip on a crack in the pavement and pitch forward onto my knees. The sound of laughter resonates in my ears and the back of my head throbs. I reach up to touch my skull, half-expecting my hand to come away bloody, but the wound’s nothing more than a bump.

The dizzying spin of police lights and the accompanying thud of footsteps against the frosty ground intensify my headache. I wrap my arms around myself to try to stop my shivers. It may be North Carolina, but even southern beach towns feel the chill in February.

“You’re not supposed to be here.” A flashlight shines in my eyes before angling back to the ground as the cop bends down to put a hand on my shoulder. The voice is much softer as he takes in my state. “Are you all right?”

It’s a fight to force the words past my chattering teeth. “H-h-how did I get here?”

Another beam of light hits me in the face as a second, shorter cop jogs up behind the first. “Hey, Wainwright? Isn’t that the Greene girl?”

Why would a Midway Beach cop know who I am? The answer slowly penetrates my fuzzy brain. My stepfather’s a felon now, and these must be the two cops who came to the house asking questions about him. The surge of anger is preferable to the headache, but only barely.

“Yeah, it is,” Wainwright says. He’s so ripped he looks like he’s wearing a muscle suit. He loops a strong arm under my shoulder and helps me to my feet. The ground spins, but he doesn’t let me fall. “Your name’s Jade, right? What are you doing here, Jade?”

“I was walking to Becky’s house.” I’d set out for my best friend’s house at dusk, but judging by the darkness shrouding our surroundings it seems much later than that now. “And then I was here.”

A terrible realization sweeps over me. I’m missing time. It’s the sort of thing that happens in movies like Invasion of the Body Snatchers. For all I know, there’s a pod Jade hiding in the carnival, waiting to invade our peaceful little town.

“What happened to me? Where have I been?” I ask the cops.

Wainwright peers over my head at his partner. “We better take her to the hospital. Looks like she has a whopper of a concussion.”

At the hospital, I discover things are worse than I thought. Much worse.

I haven’t just lost hours. I’ve been gone for days. 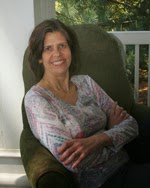 Darlene Gardner no longer spends her days waiting for an athlete to say something interesting. Nope. Now she makes up her own quotes and torments people. Fictional people. Promise.

Although leaving her life as a newspaper sports and feature writer behind for love and romance worked out pretty well, she's veering off in a haunting new direction with the Dead Ringers eBook serial, landing at a seaside carnival where evil lurks and nothing is as it seems.

Darlene has more than thirty books in print, from single-title romantic comedies to emotionally charged family dramas. Updated editions of her romcoms, as well as a couple romantic mysteries, are available for the eBook market.