Please join me in welcoming the award-winning author, Leigh Court to Conversations today! Leigh is here to talk about her new contemporary romance, Fear Of Flying. So be sure and check out Leigh's commentary, and the cover, blurb and excerpt from Fear Of Flying!

Many thanks for letting me blog today, Lisa!

Confession: I’ve pretty much always been afraid to fly. It started at age 18, with a rough plane ride on my first flight to Europe. Since then I’ve tried not to let my fear of flying control my life, but every time I board a plane, I can’t help but get a little nervous. Ironically, I’ve had a fortune teller assure me I’ll never die in a plane crash and an astrologer friend tell me I will live to a nice old age. I think of those two women every time I buckle my seatbelt!!

But now I’ve found a way to turn my fear of flying into a positive thing.

I’m the author of nine books, and the advice always given to writers is “write what you know.” So for my latest story, aptly titled Fear Of Flying, I decided to get semi-autobiographical. I gave my heroine, Jessie Jordan, a fear of flying and wrote her story based on many of the real-life experiences I’ve had.

A job as a book publicist? Check. On a nationwide book tour with a travel writer? Check. Winter de-icing of plane wings and bouts of white-knuckle clear air turbulence? Check!

Everyone probably has stories of scary plane flights, me just more than most people. And I included them all in this book! Pretty much everything in it is true, except for the ex-military travel writer hero of the story, Regan Quade, whose lust for Jessie helped make this a very hot contemporary romance! 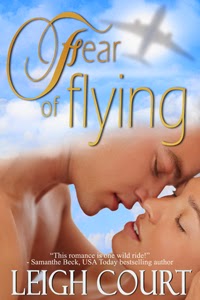 “You’re never going to die in a plane crash…”

Book publicist Jessie Jordan is deathly afraid of flying, which prompts travel writer Regan Quade to come up with a highly imaginative (and very intimate!) way to calm her anxiety. When they’re thrown together on a two-week cross-country book tour, the result just might be a bestseller!

This romance is definitely one wild ride! I’ve gotten some great reviews and some wonderful feedback from readers. Here are some buy links if this sounds like a fun read to you…


Excerpt from Fear Of Flying by Leigh Court

“You’re never going to die in a plane crash.”
Jessie Jordan stared into the piercing blue eyes of the old fortune teller, her mouth going suddenly dry. She didn’t believe in fortune tellers, or psychics, or any paranormal stuff, but one of her girlfriends had given her this “reading” as a birthday present, and Jessie’s curiosity had gotten the better of her. She’d expected the gray-haired woman to spout some generic drivel, like ‘you will meet a handsome stranger’ or ‘you will come into some unexpected money.’
Not to predict something that would hit so close to home.
“How… How could you possibly know I’m afraid of flying?”
“This.” The woman opened her palm, where Jessie’s pearl ring was nestled. “It vibrates your fear.”
The fortune teller had requested a personal item that she’d claimed would help her see Jessie’s future. So Jessie had handed over the simple pearl ring she always wore – the one her parents had given her for her eighteenth birthday a decade ago, and which had been on her finger a month later, when her parents had taken her to Italy for a two-week vacation.
Her first airplane ride.
And the most traumatic experience of her life.
Nervous as Jessie had been about stepping onto the huge plane in New York that summer, the overnight flight had been fine until the aircraft had started its descent into Leonardo da Vinci airport the next morning. The 747, as Jessie later learned, did a common ‘step landing,’ which entailed descending a few thousand feet, gliding, then descending a few more thousand feet on its approach to landing.
Trouble was, every time the plane sank on its glide path, Jessie had been convinced they were going to crash. She’d never been very good with roller coasters, and the wavy motion of the plane had made her sick to her stomach. The minute she’d felt a sour taste in her mouth, she’d known she was in trouble.
The flight attendants had ordered everyone to buckle their seatbelts for landing, but Jessie had shakily unhooked hers and scrambled into the aisle, making a mad dash for the bathroom in case she was going to throw up. She’d never made it. A flight attendant at the back of the plane had blocked Jessie’s desperate beeline down the aisle and literally shoved her into an empty seat in one of the last rows, ordering her to buckle up for the landing.
That’s where a guardian angel had come to her rescue. A young man in military uniform in the next seat had urged her to put her head between her knees and just breathe. As Jessie had bent over, shaking with her effort not to get sick, she’d felt his hand gently stroking her back, trying to calm her. With his other hand, he’d slipped an air sickness bag between her knees, just in case.
But it turned out she hadn’t needed it.
His advice worked. The plane landed without her making a scene.
Jessie gazed at the fortune teller in front of her, her mind lingering on that old memory. Odd, but she hadn’t thought about that guy in ten years. She’d never even found out his name, although she could still remember the brilliant smile of approval he’d given her when the plane landed.
To this day, she was still a nervous wreck whenever she had to fly, but she’d tried hard during the last decade not to let that fear dictate her life. In fact, she’d taken a job three years ago as a book publicist, which entailed flying around the country with authors promoting new book releases.
Jessie believed in facing her fears.
“Here.” The fortune teller handed back Jessie’s pearl ring with a knowing look. “You didn’t believe in my ability when you sat down at my table. Do you believe now?”
She cleared her throat. “Actually, I expected you to tell me I’m going to meet a tall, dark stranger. I mean, there’s no wedding ring on my finger. That would have been the obvious thing to say.”
The fortune teller laughed. “Oh, that will happen, too, my dear. In fact, the two things are fatefully intertwined. But it seemed more important to reassure you about your fear of flying.”
Oh, brother. Jessie rolled her eyes. She was going to meet a tall, dark stranger? Okay. Time to get out of here.
The old woman tilted her head and gave Jessie a perceptive, all-knowing look. “Just remember what I told you. There’s no escaping fate.”


Award-winning multi-published author Leigh Court has been writing since age eleven, starting with wild adventure stories for her elementary school newsletter, growing up to be a television news journalist whose assignments took her on real life adventures.

After traveling most of the world, she segued into the more normal job of public relations, but she's never stopped writing. Having seen what she has of life's struggles, Leigh now writes romantic fiction because she wants her readers to be able to escape into a story guaranteed to have a happy ending!