Please join me in welcoming the USA Today bestselling author, Judith Arnold to Conversations today! Judith is here to talk about book 4 of The Magic Jukebox series, Heat Wave. So be sure and check out Judith's commentary, and the cover and blurb below!

Remember when every booth in a diner was equipped with its own individual jukebox? As a child, I loved flipping through the pages of those booth jukeboxes and deciding which song from each page I would choose to play, if only I had tons of money (and my parents weren’t there, griping about that awful rock-and-roll.) When I was older, my friends and I would gather around a free-standing jukebox, arguing over which three songs to play on our quarter, making our choices, hoping we didn’t press the wrong buttons and get stuck listening to a song we hated. I especially liked jukeboxes with clear glass windshields that allowed me to see the armature slide up and down the row of 45’s, finally plucking one and transferring it to the turntable.

So I guess it’s only natural that I’d write a series of romances about a magic jukebox. A beautiful antique jukebox that could cast a spell on listeners with the music it played? This seemed perfectly logical to me.

I created the picturesque seaside town of Brogan’s Point, north of Boston, and planted the Magic Jukebox inside an unpretentious pub called the Faulk Street Tavern, run by a no-nonsense six-foot-tall woman named Gus Naukonen. Gus has never been bewitched by the jukebox herself, and her boyfriend, police detective Ed Nolan, thinks the whole mythology surrounding the jukebox is a bunch of hokum. But Gus has seen its effect on her customers.

In Changes, the first book in the series, wealthy Bostonian Diana Simms is in town with her fiancé to look at wedding venues, but when the jukebox plays the David Bowie song “Changes,” it creates a connection between her and Nick Fiore, a local boy with a troubled past who now tries to help other troubled youths. In True Colors, the Cyndi Lauper song “True Colors” transforms the relationship between artist Emma Glendon and high-tech mogul Max Tarloff, who happens to be her landlord. In Wild Thing, the Troggs song “Wild Thing” plays, and Emma’s best friend, Monica Reinhart, discovers the wildness inside herself when bad boy Ty Cronin sails into town.

It took a few months to get Heat Wave written and ready, but now the newest Magic Jukebox book is available. You may be familiar with the Martha and the Vandellas version of “Heat Wave,” which I use in the book, or the Linda Ronstadt version. Both are loud, bouncy and infectious. In Heat Wave, Caleb Solomon, the lawyer who defends Ty when he gets himself into serious hot water in Wild Thing, is suffering from a broken air conditioner in the midst of a hot, humid stretch of weather. He’s in the Faulk Street Tavern, cooling off, when high school teacher Meredith Benoit encounters him. Meredith has been the victim of a prank which might cost her her job, and she needs a lawyer. They both also need some relief from the heat wave enveloping the town—and the heated wave of passion that sweeps through them when the jukebox captivates them with its magic.

I hope you’ll give Heat Wave—and all the Magic Jukebox books—a try. If you love music, and if you love romance novels with just a touch of magic in them, you’ll love this series. 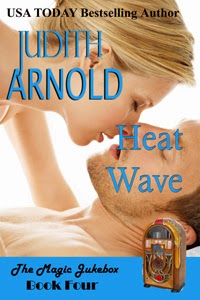 The Magic Jukebox sits in the Faulk Street Tavern in the quiet seaside town of Brogan’s Point, Massachusetts. No one knows what classic rock songs will come out of the jukebox when a coin is inserted, but every now and then, the jukebox will play a song that casts a spell on two bar patrons—a song that will change their lives and open their hearts to love.

Caleb Solomon’s office air conditioner is on the fritz. Although not his choice, he winds up meeting with a difficult but profitable client in the pleasant chill of the air-conditioned Faulk Street Tavern. It’s there that high school teacher Meredith Benoit finds him. Due to a silly prank, her job and her reputation are in jeopardy. She needs a lawyer, fast. But the Magic Jukebox starts playing “Heat Wave,” and a hot wave of passion crashes over Caleb and Meredith, catching them in its undertow and carrying them off. 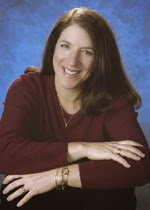 USA Today bestselling author Judith Arnold has written nearly 100 published novels. She’s received four Reviewers Choice awards from RT Book Reviews, and she's been a multiple finalist for Romance Writers of America's RITA Award. Her novel Love In Bloom's was named one of the best books of the year by Publishers Weekly, and her novel Barefoot in the Grass has appeared on recommended reading lists at hospitals and breast cancer support centers.  Married and a mother of two, Judith lives near Boston in a house with four guitars, three pianos, a violin, an electronic keyboard, a balalaika and a set of bongo drums. Visit her website to learn more about her, and sign up for her newsletter for updates and news.